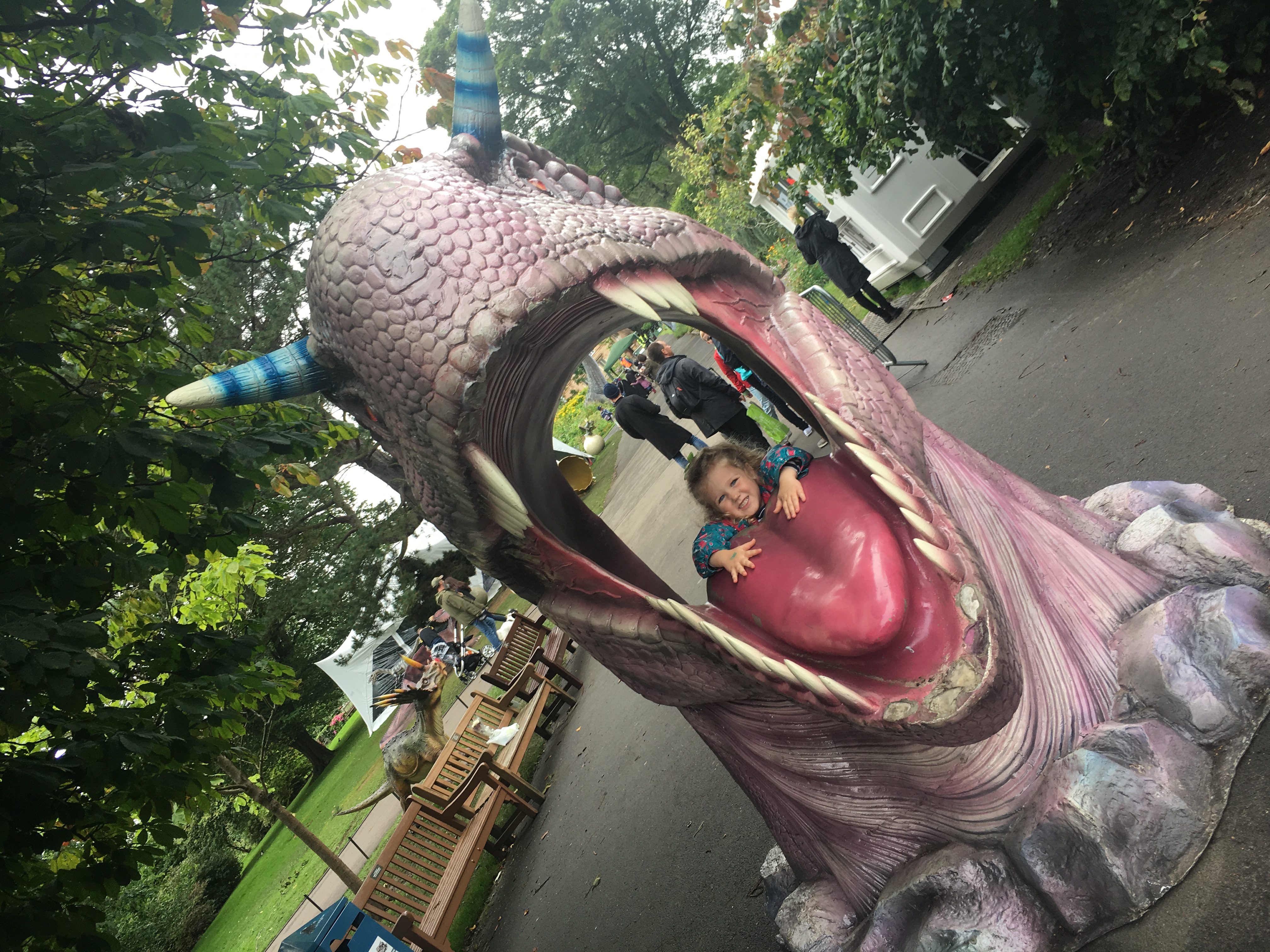 I was so looking forward to Jurassic Kingdom when I bought the tickets. From the advertising, it looked excellent. Dinosaurs that move and make noise and that could seem real to my little humans – what’s not to like?

Well. Let me tell you.

Before I begin, Jurassic Kingdom is a walk round event in Glasgow’s Botanic Gardens, with dinosaurs that move and make noise. Some of which are a very impressive size. The T-rex, the ankylosaur and the triceratops were highlights for us. It could be pretty magical for kids to see dinosaurs that seem real. It could be excellent. But it isn’t. 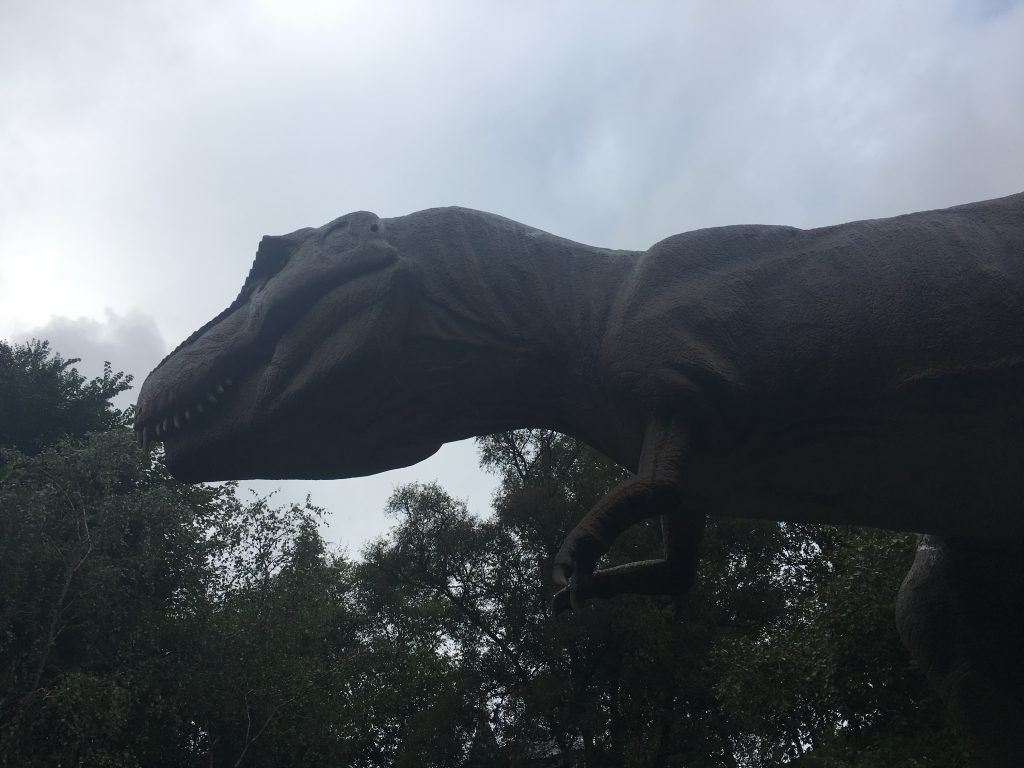 There is such a lack of effort in the exhibits. Not in the animatronics (that’s what you call making them move, right?); that part is good. Many of the dinosaurs themselves looked relatively realistic. However the metal stands that hold up the exhibits were left totally exposed as were the wires all over the exhibits. Yes, we all know that the dinosaurs aren’t real, but with just a little bit of effort and a bit of fake grass or shrubbery here and there it could’ve been so much better.

The ‘loop’ that the sound and movement is on means that there is a longer time waiting for the dinosaurs to move and roar than the dinosaurs are moving and roaring. Adjusting this slightly would be a big improvement. 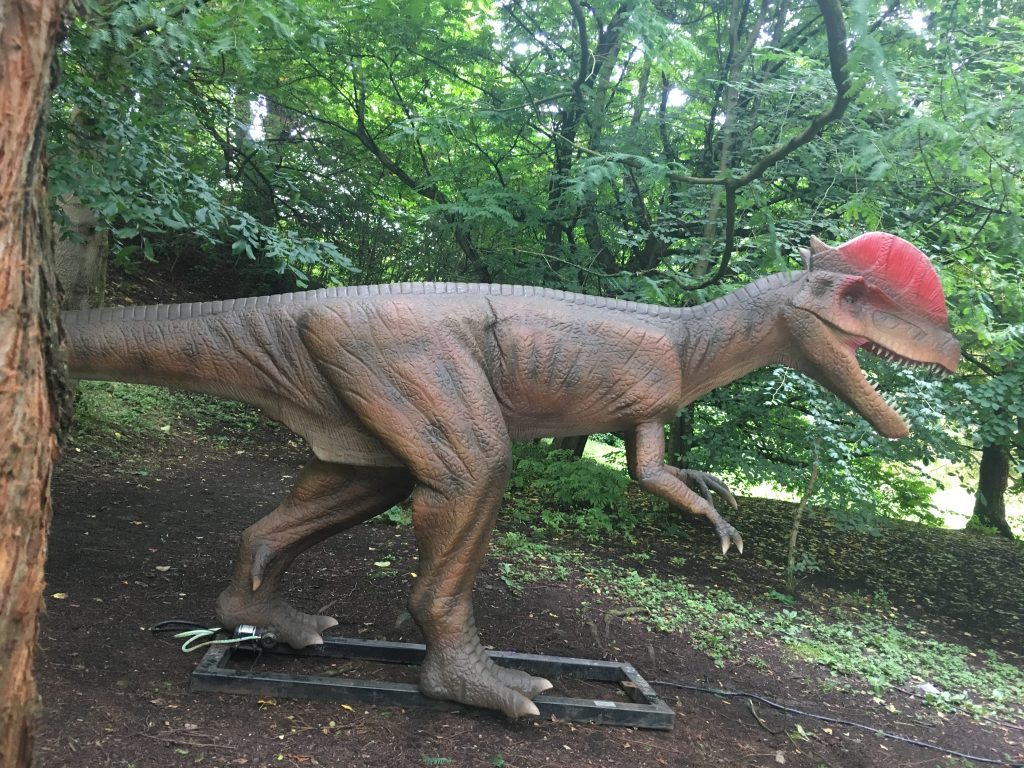 Then there’s the staff. There was one guy who was cheerful and engaging with the kids going in, asking things like, “Are you going to go and see the T-rex?” He knew how to speak to children and made it that bit more exciting. He was the only one. The rest of them stood with their clickers looking thoroughly bored. Any of the staff along the route could engage with the kids; a dinosaur fact, asking them a question, anything at all. A little bit of training goes a long way.

A couple of the dinosaurs had broken bits. This we could easily explain – he bit his tongue or he lost it in a fight with another dinosaur… And so this didn’t bother me. 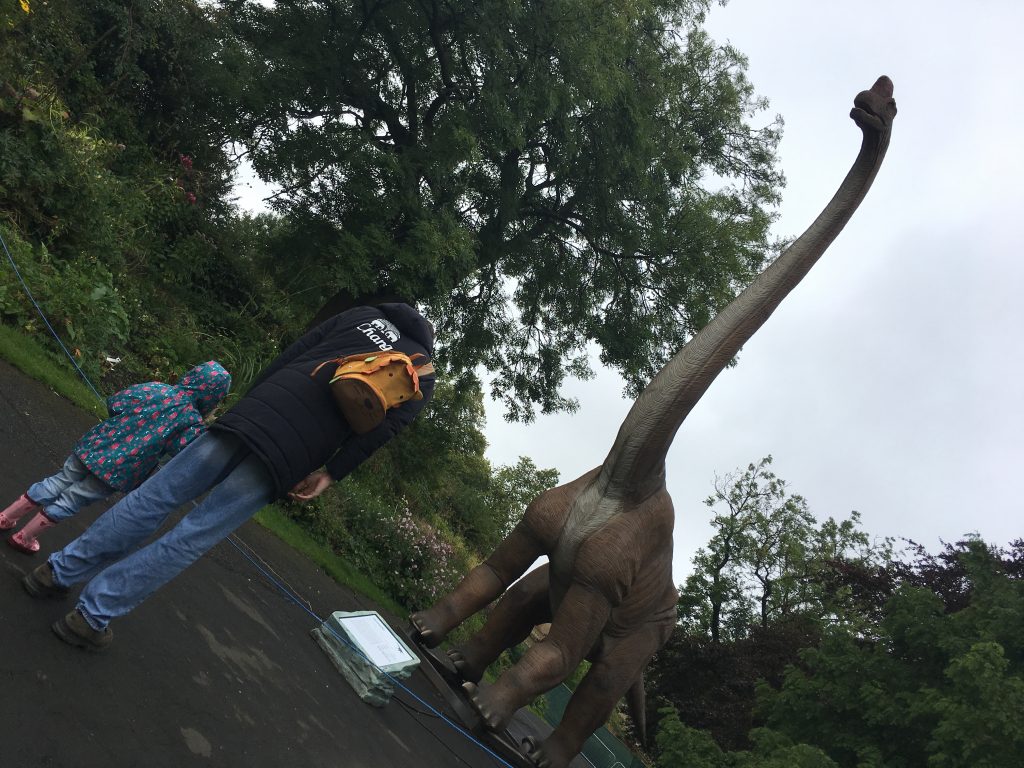 What did really bother me were the exhibits that were signposted incorrectly. One was signposted as a dino fight scene that only had one dinosaur in it! Had it been day 1 I’d have been more forgiving. But we went on Monday after it had been open all weekend. With a little bit of care and effort this wouldn’t have happened. When we walked back through a laminated paper sign had been placed on top of the more permanent signpost. The first sign stated 2 dinosaur species (fighting with each other), neither of which were the one dinosaur in the exhibit.

I don’t know if it had been signposted incorrectly for the 3 days up to this point, but regardless of how long it had been incorrect, the exhibition is supposed to be educational – like an animatronic museum. In running an exhibition like this, you have a responsibility to ensure that the information they give out is correct. Even if the information you are giving out is incorrect for just an hour, that’s an hours worth of visitors going away with wrong information. It’s lazy and it’s irresponsible. 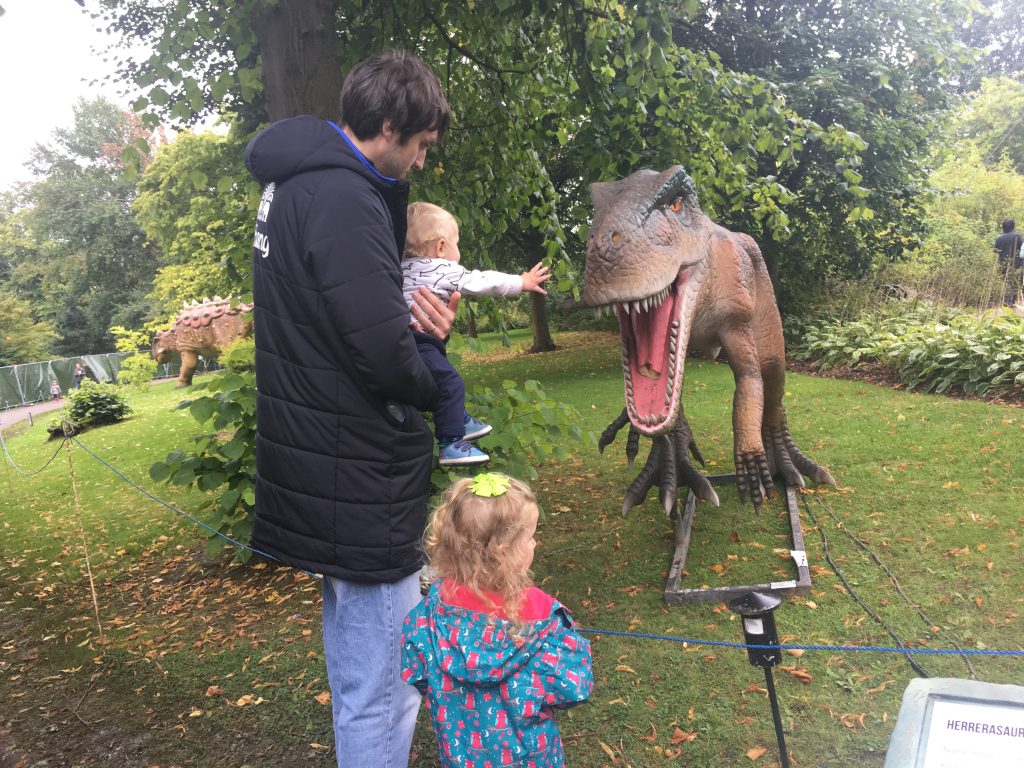 Then there’s the cost of tickets. I got mine discounted but if I hadn’t it would’ve been more than £30 for the 4 of us (and the little man is free). £30 for half an hour walking round dinosaurs, some of which were broken and incorrectly signposted. (The cost on the door is £13 for adults and £11 for children. That’s pretty extortionate.)

The food is also overpriced. But I guess that’s to be expected. (We went to Paesano afterwards, just along Great Western Road, where you can get possibly the best pizza in Glasgow for £7 or £8. Just saying.) 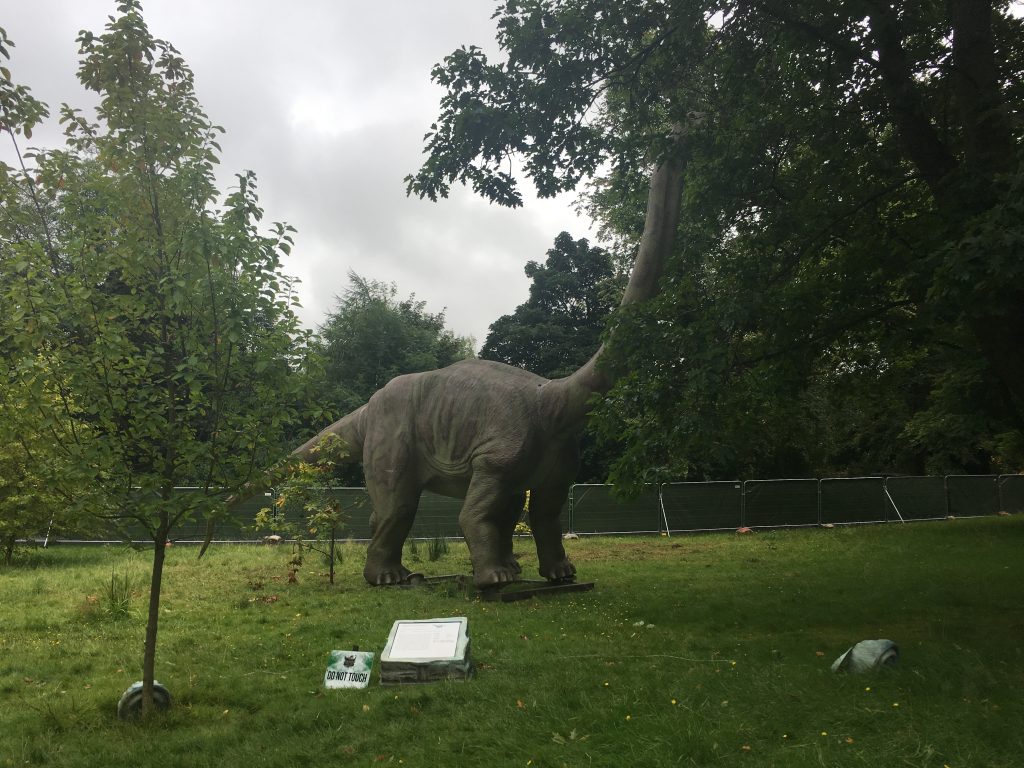 A couple of days before we went along I read some reviews on the Jurassic Kingdom facebook page that were pretty scathing, so I had prepared myself for the worst. But I was still disappointed. My husband hated it. I really wanted to like it, and I did like the dinosaurs. But I just thought it could’ve been better. And with the amount they’re charging for entry I really expected something better.

In saying all of this, if your kid is into dinosaurs it is probably worth a visit. As we all know, the look on their little faces can make everything worthwhile. If your kid likes something else I’d be inclined to spend my money elsewhere.

You can still go along to the botanics and see a couple of dino’s for free – not the animatronic ones – far less realistic looking ones. And kids can have a play in the little sandpit and dig for some dino bones too. Anything else and you’re in for £20 for you and one child. 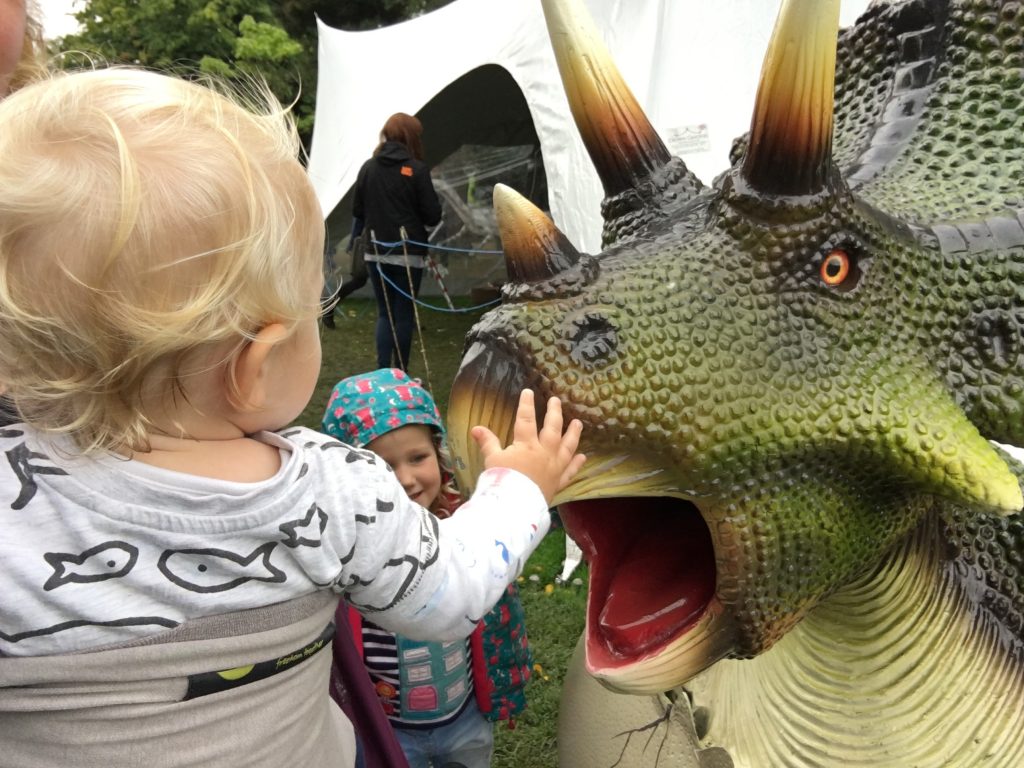 The Jurassic Kingdom experience will be on in Glasgow’s Botanic Gardens until the 10th of September.