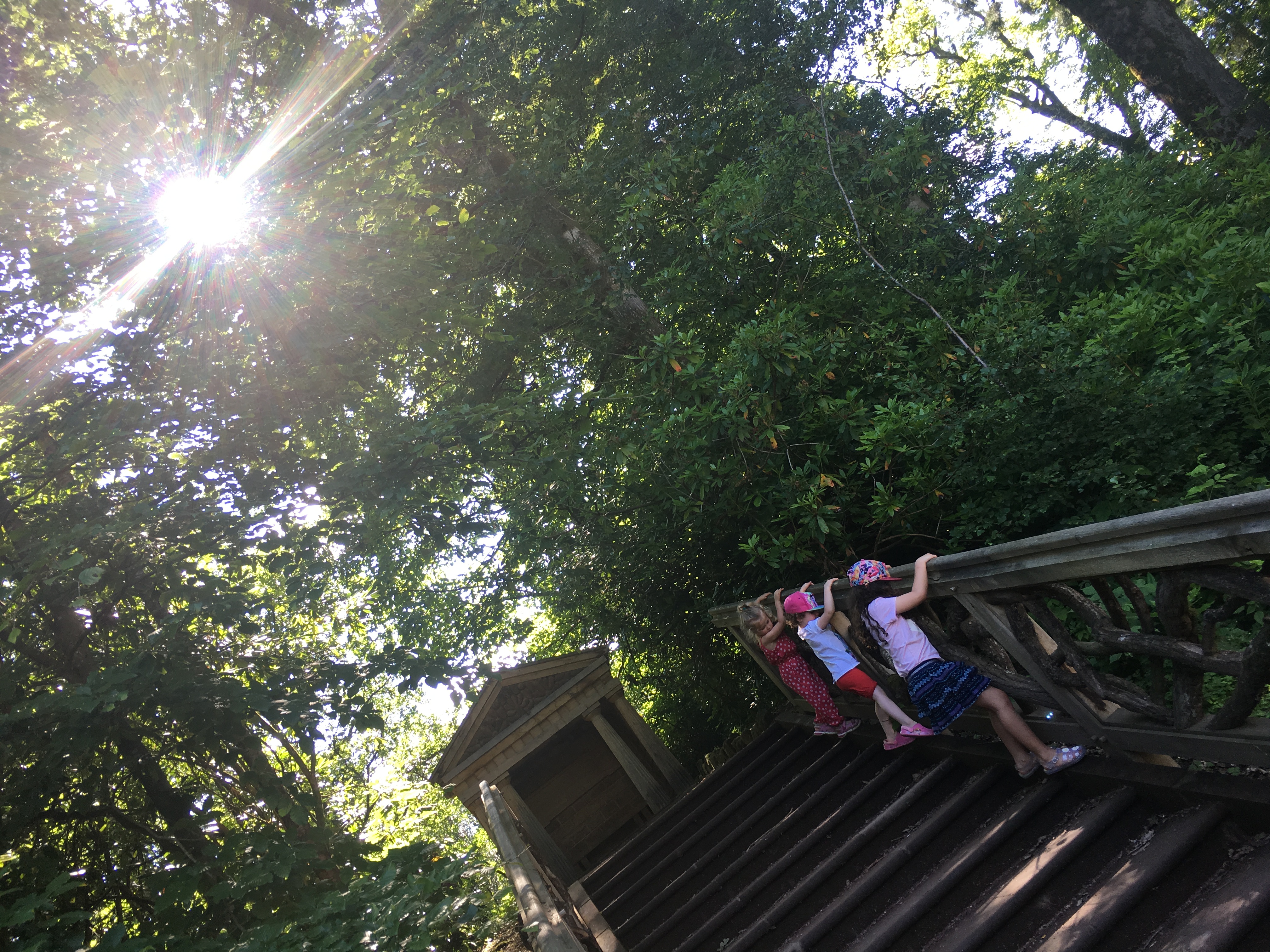 I only learned about the existence of Dumfries House last summer, during the school summer holidays, after a friend told me about the water play area they have there. When I saw that we were to get one day of wonderful sunshine before at least a week and a half of rain, I thought we’d make the most of it and head down to have a play. 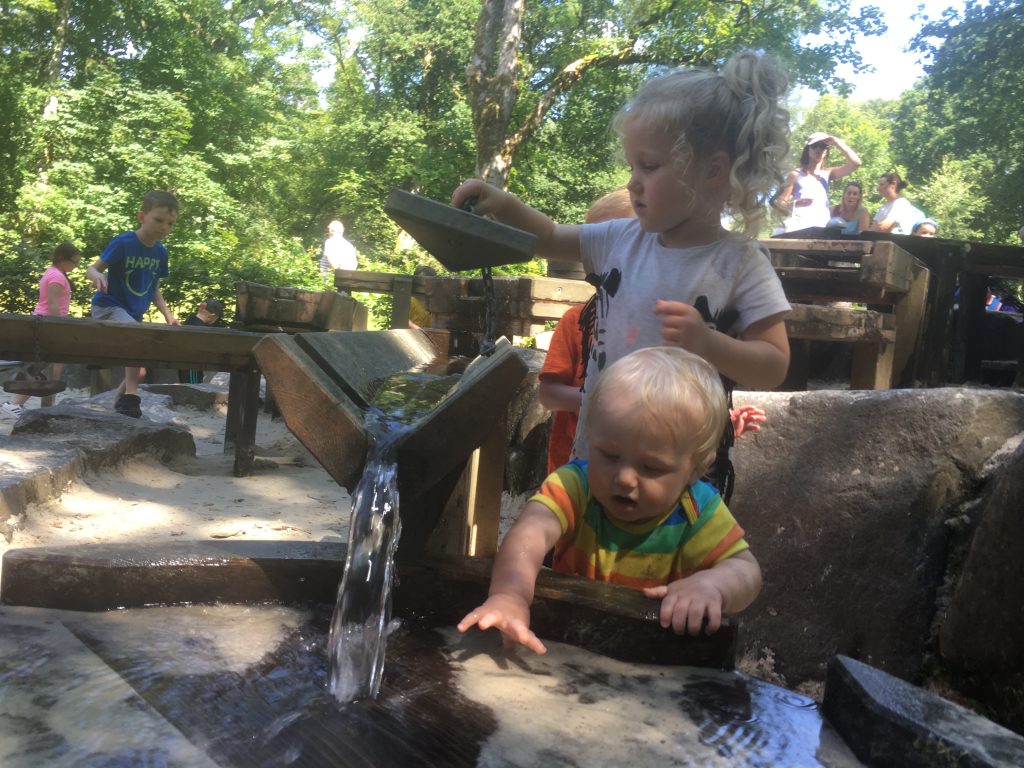 We spent most of our time at the water and sand play areas whilst at Dumfries House. And for very good reason: they are excellent!

The water play area, or Engineering Playpark, is brilliant. There are water pumps and water wheels and wooden reservoirs and water gates. There are metal troughs and plugs and squirty things and a pump that you jump on to produce a big water jet. There are oh so many different bits to play and splash in. 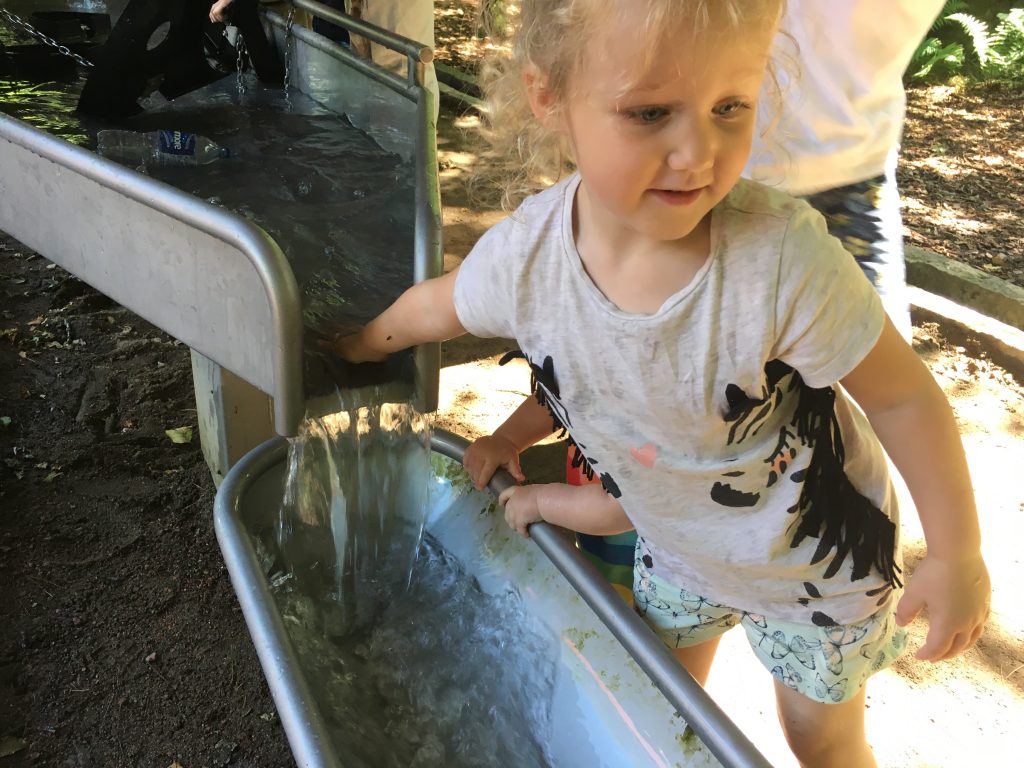 Every bit of it can be played with to make the water move in different directions; stop it; release it; make it flow faster and slower. I could’ve played there myself for hours. Honestly, it was great fun.

The little lady had a fantastic time trying out all the different bits and pumping the water and making it go whichever way she decided down the slopes and through the troughs. The little man mainly splashed and got himself utterly soaked, but he had an absolutely immense time doing so. 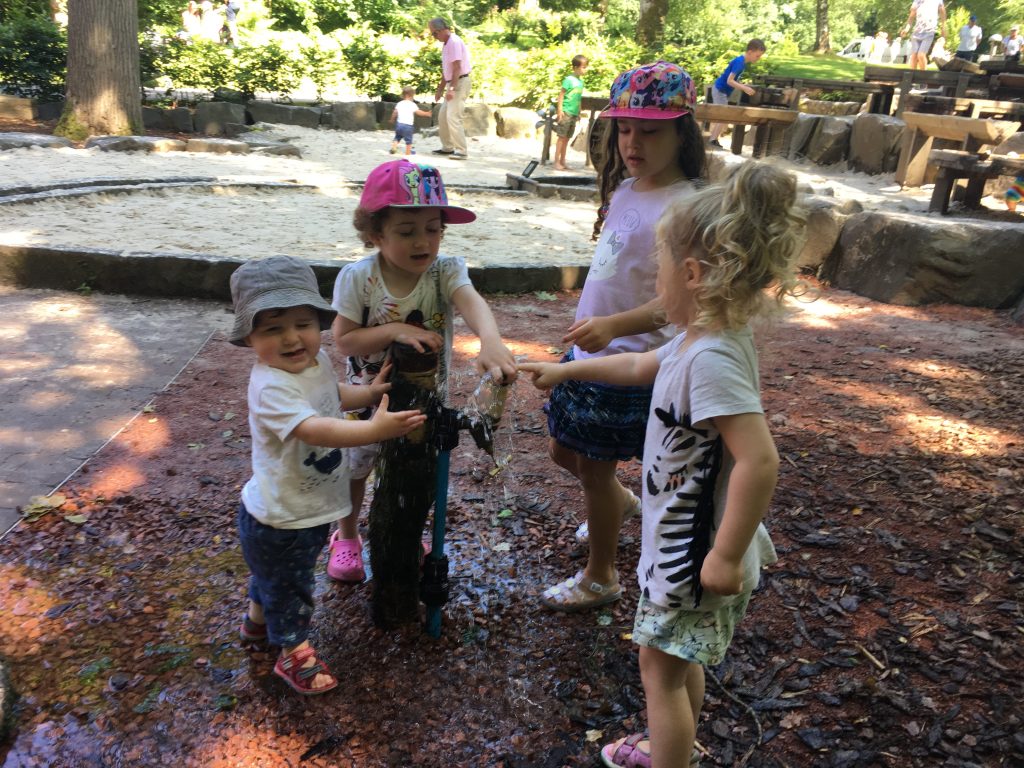 The sand play area is basically a big sand pit with a couple of climbing frames for climbing up and down (obviously!) These have attached buckets for hoisting sand up, and sand slides for sliding it back down again. There are buckets all over the place.

The little lady loves this type of playpark and had a great time in here. 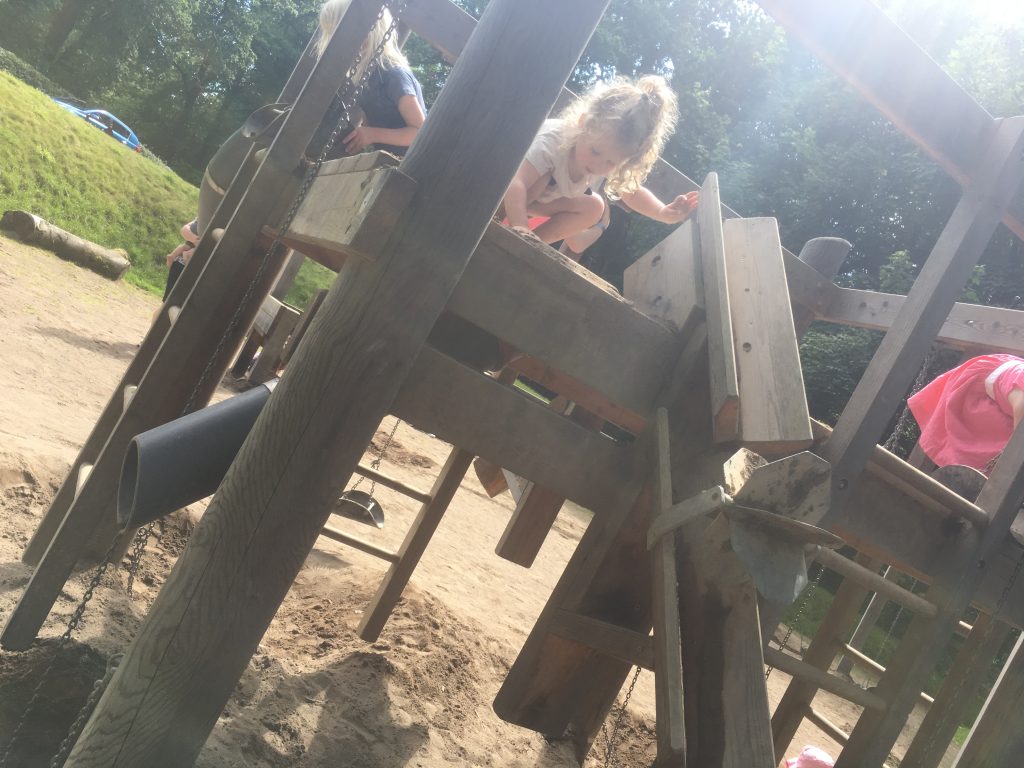 There is also an adventure playpark which we didn’t get along to. It looked like it was suitable for slightly older kids and not for the very little ones, but I’m sure the little man would’ve given it a go as well. He is quite a climber (you may guess that from the many bumps and scrapes he frequently sports, and his twice glued head.)

The only other part we made it along to was the maze. The kids enjoyed it. With 5 kids between 2 of us and a pond in the middle, I think we adults found this slightly more stressful. But we started a game where the kids took turns in choosing the route through the maze and it got significantly more fun for everyone! 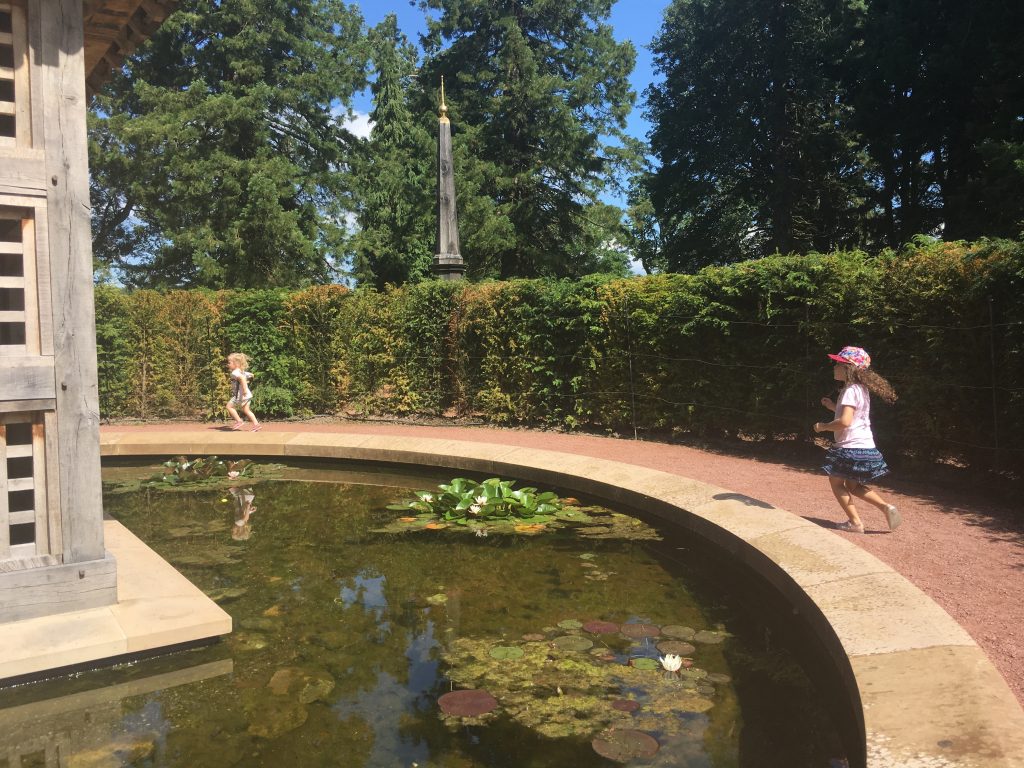 The grounds at Dumfries House are really pretty. There are some lovely walks around the woodland (although we didn’t do too much walking as it was roasting the day we were there). The bits we didn’t make it to were the Chinese Bridge, which looks really pretty from the website, the walled garden, and the education farm which apparently has pigs and chickens and ducks. (Note: the aim of the farm is to provide a “farm-to-fork” experience for kids, just in case that’s not your vibe.) 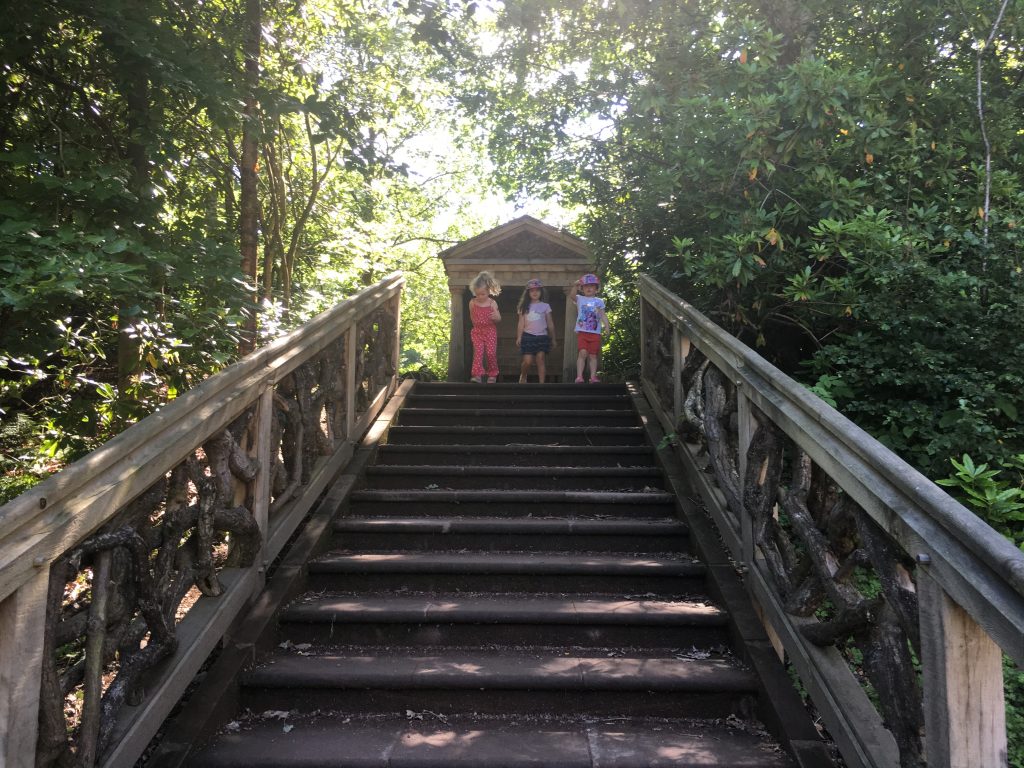 The drive there took me about 40 minutes (with no traffic issues at all on the roads that day). There is a car park on site within the estate grounds. It’s free and it’s pretty big, so you shouldn’t have a problem parking.

Some of the paths around the grounds are stony – tiny little stones. I could get around no problem with the buggy, but the kids all had sandals on, and I swear we had to stop at least 200 times in the 5 hours we were there to get stones out of their shoes. 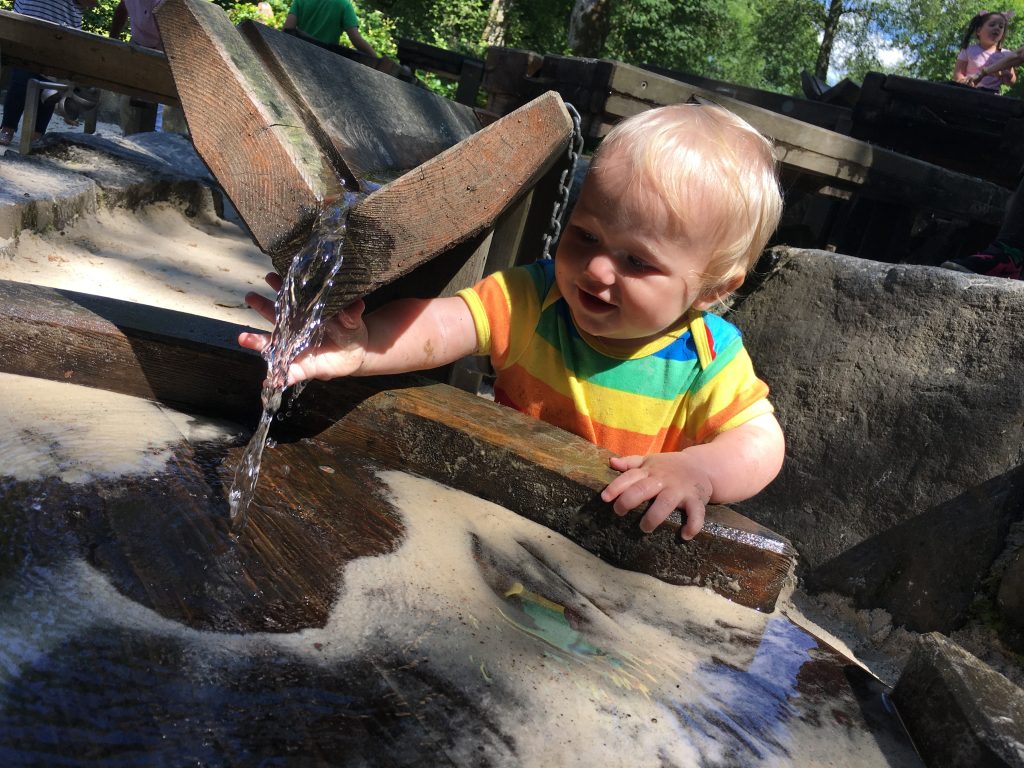 Take spare clothes if you’re heading here. Either that or waterproofs and wellies. All of the kids ended up soaked. None of them were bothered about that as it was such a glorious day when we visited. But your kids will most likely get soaked too.

There is plenty of space for picnics. And if you don’t fancy making all the food before you leave of a morning, you can take sandwiches and kids lunch boxes out of the cafe for your picnic. 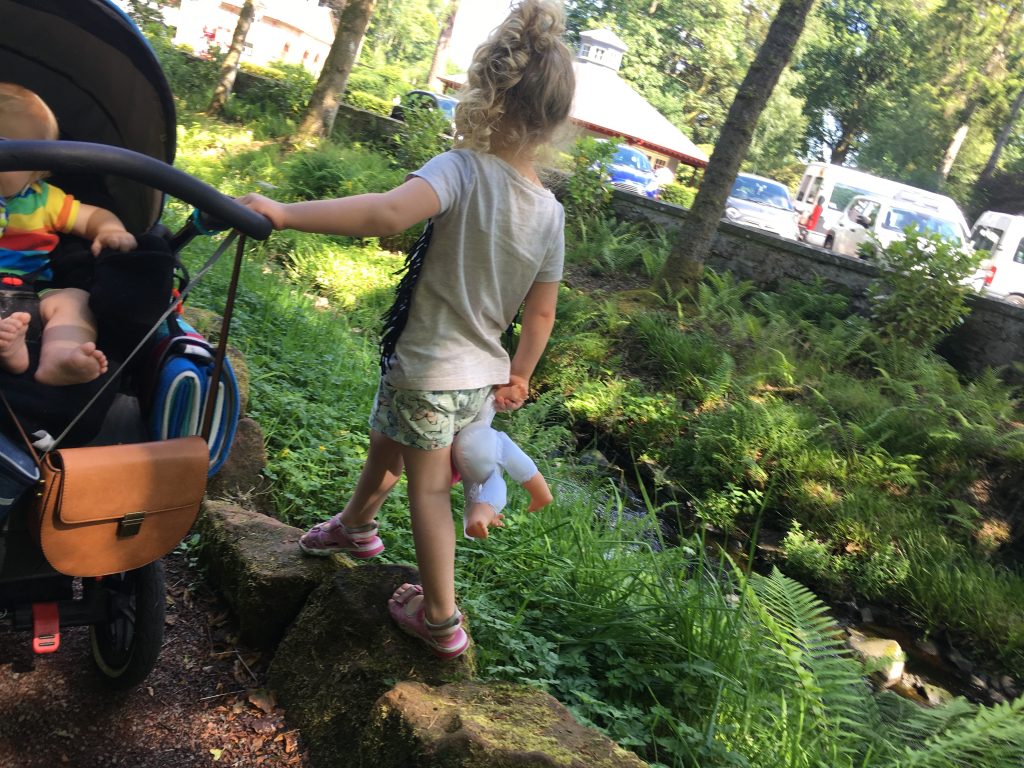 We didn’t eat inside the cafe. We got some takeaway sandwiches for the kids and adults which were really nice, and not extortionate. And later we on got some ice cream which was delicious. The cafe food looked really nice, and the cafe itself looked lovely too. (Though some of the clientele didn’t seem to like kids very much, based on our toilet trips where middle aged ladies appeared to think that children were invisible and attempted to skip the toilet queue in front of a desperate 3 year old – seriously – who does that?!)

I have heard rave reviews about the food in the restaurant too. 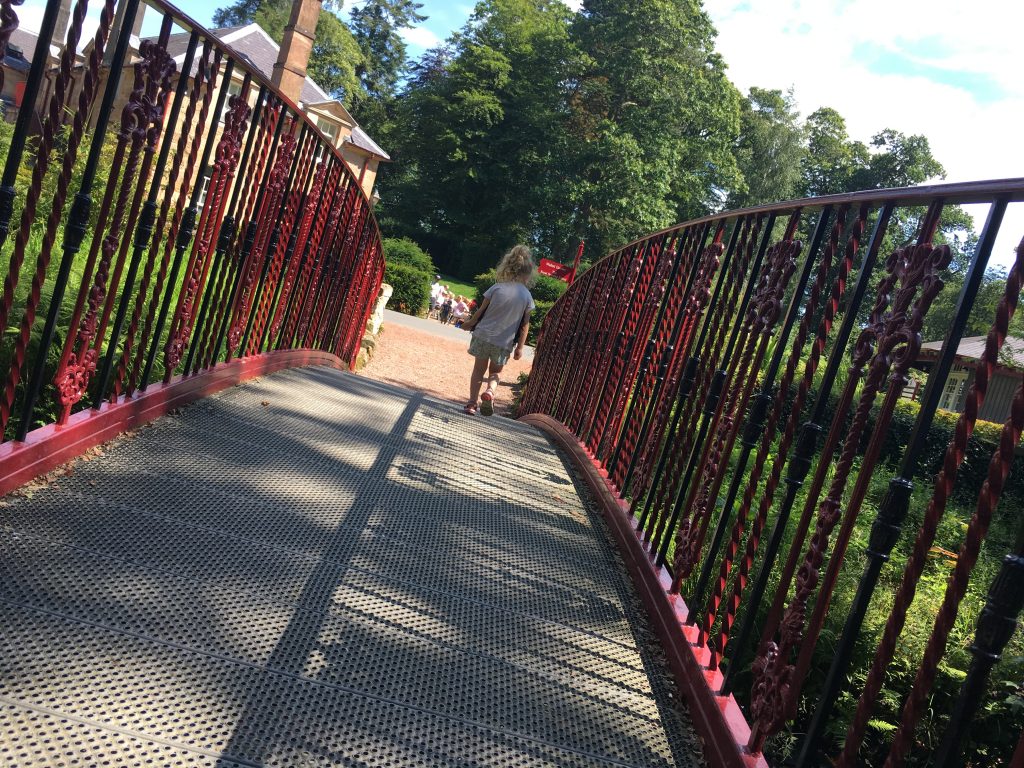 Entry to Dumfries House grounds and playparks are completely free. The maze is £1 for adults, and free for children. Tours of the house are available but I’m not sure how about the cost of those – we were there purely for outdoor play. (And I doubt that a tour of the house would’ve been a stress-free experience with 5 kids under 5 to watch.) 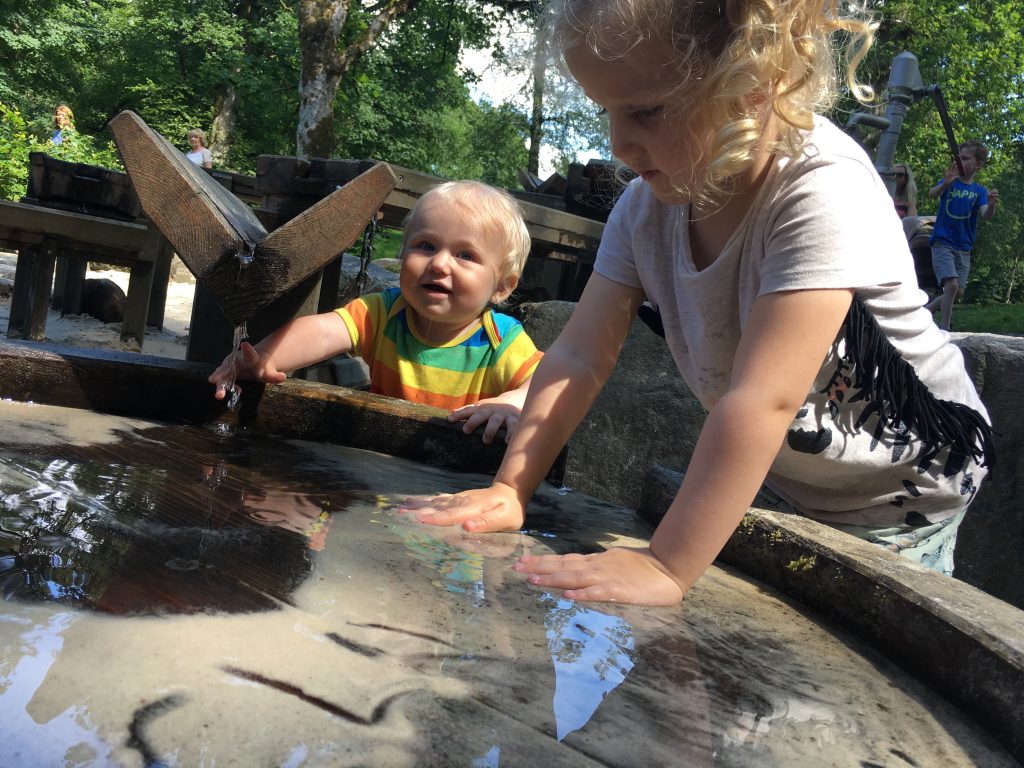 I can’t believe we only heard about this place so recently. It is beautiful and that water play area (Engineering Playpark) at Dumfries House is the best we’ve come across. The kids had an absolute blast playing there, including the littlest one who was very glad he could sofa-surf by that point last year!

It is a little bit of a drive to get there, but you could easily spend a day at Dumfries House just exploring the grounds and playing as you go. There’s so much to do. We will most definitely be back for future visits. 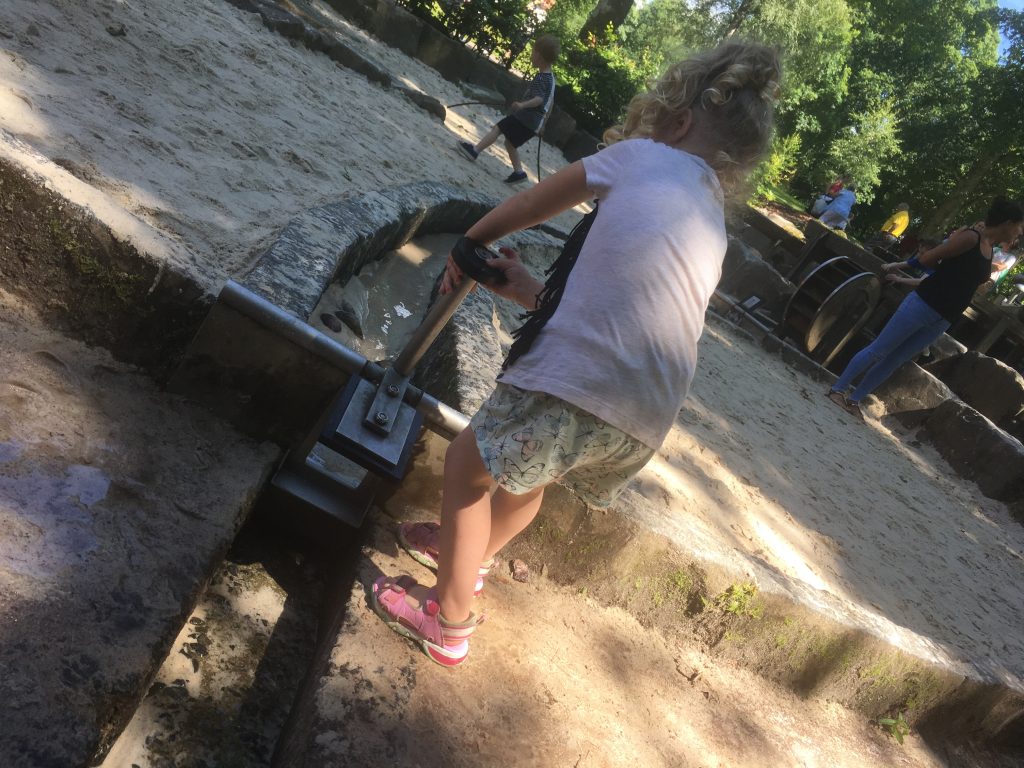