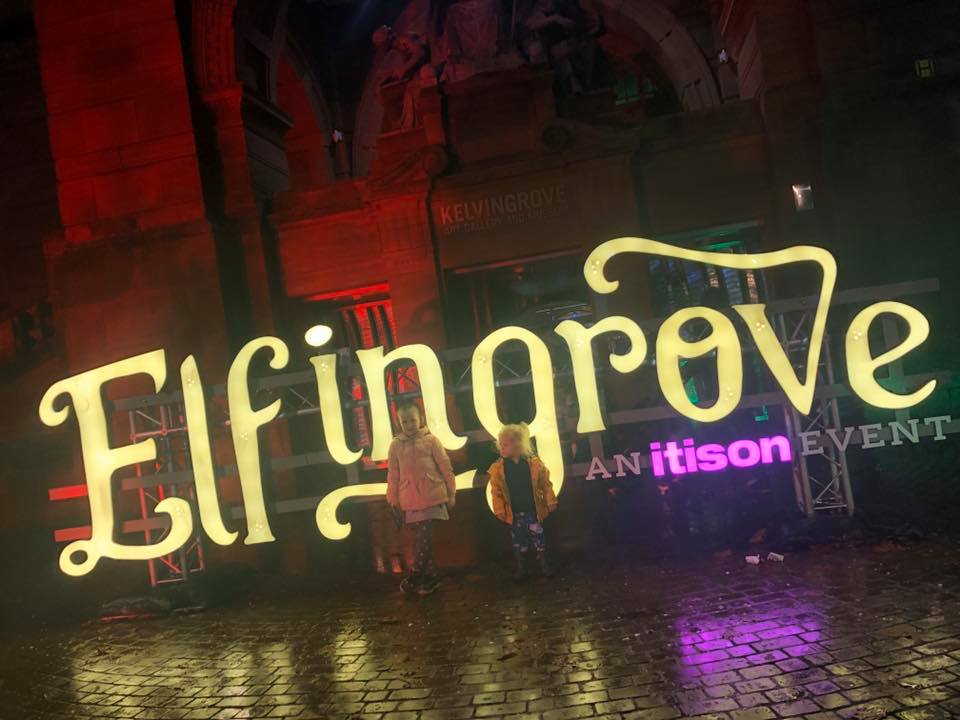 Right. Let’s talk Elfingrove. I don’t want to ruin surprises for anyone, but my guess is if you’ve got tickets you probably already know what you’re going along to. I got so many messages on facebook & instagram asking what I thought of it when I posted on social media, so here goes.

Full disclosure – our tickets were very kindly gifted to us by the lovely folks at Itison so we didn’t pay for it. But all opinions are my own.

The kids were so excited heading in with the dramatic music, all the lights outside and the snow falling. You enter in a big group, and after a wee elf chat you are directed round a barrier to start your tour. We kept to the back, didn’t follow the herd and took our time heading round. Even when the next tour group caught up with us we didn’t find it too busy.It was quieter than the day we went to see Dippy and found that 6 million other people had done the same.

Elfingrove was billed as Night at the Museum meets Elf. There were a lot of elves; 12 different ones you found as you wandered round who all interacted with the kids; rapping, telling jokes, knight out elves with big swords & all the chat. Some bits of the museum were sort of brought to life – the spitfire, the floating heads (we stopped to watch this for a bit and they “sang” some songs, one Christmas one). And of course the dinosaurs.

This however, is definitely not Glasglow. It doesn’t have the wow factor that Glasglow did. It was more about meeting the elves and interacting with them/watching them as you walked round the museum. I do get why people were disappointed but you can’t compare it to Glasglow at all. It’s not the same event. The lights were nice and some parts of the museum looked great, but they weren’t nearly on the scale of Glasglow. However there were other bits that my kids loved.

I mean, we met a dinosaur. The kids spent about 15 minutes following this velociraptor around patting it. They LOVED it. (It wasn’t well behaved. It scared the crap out of the wee man when it had a go at him. Genuinely reminded me of our cat.) The kids loved writing their letter to Santa and posting it in that very unique way… They loved chatting to all the different elves. And the snow globe silent disco was one of our favourite parts, even though it was totally sweating in there. We love a silent disco; they’re so much fun. (I do feel that this could have been included in the ticket price though.)

Then there’s the show at the end. High production value and an ending that gives you all the Christmas spirit if everyone joins in the singing… And it leaves you with a really happy Christmassy vibe before you head outside to the food & disco. I know some people were annoyed about a particular joke and about Santa saying (an endearing – not a nasty) “buggar off” but I found the first funny and the latter is something my wee nana would’ve said to me so I didn’t think anything of it.

Finally, the food out the front at the end is brilliant. Though we bought 2 sticks of marshmallows for £3 each and the kids both refused to heat them on the fire. Absolute heathens.

l really feel that this whole experience is what you make of it. There’s a lot of audience participation. Join in, engage with the elves and spend a bit of time talking to them. The little lady really loved this aspect of it and it made the night for her: the little man less so (he doesn’t like talking to other humans) and the dinosaurs made his night. It all depends on your kids.

My best advice if you’ve got tickets is to go with an open mind. See it through your kids’ eyes. This isn’t Glasglow so don’t even try to compare it. Your expectations are probably low anyway now, but don’t let the bad reviews ruin it for you. Expect to enjoy it and you will.

And seriously, just join in the singing at the very end of the show!