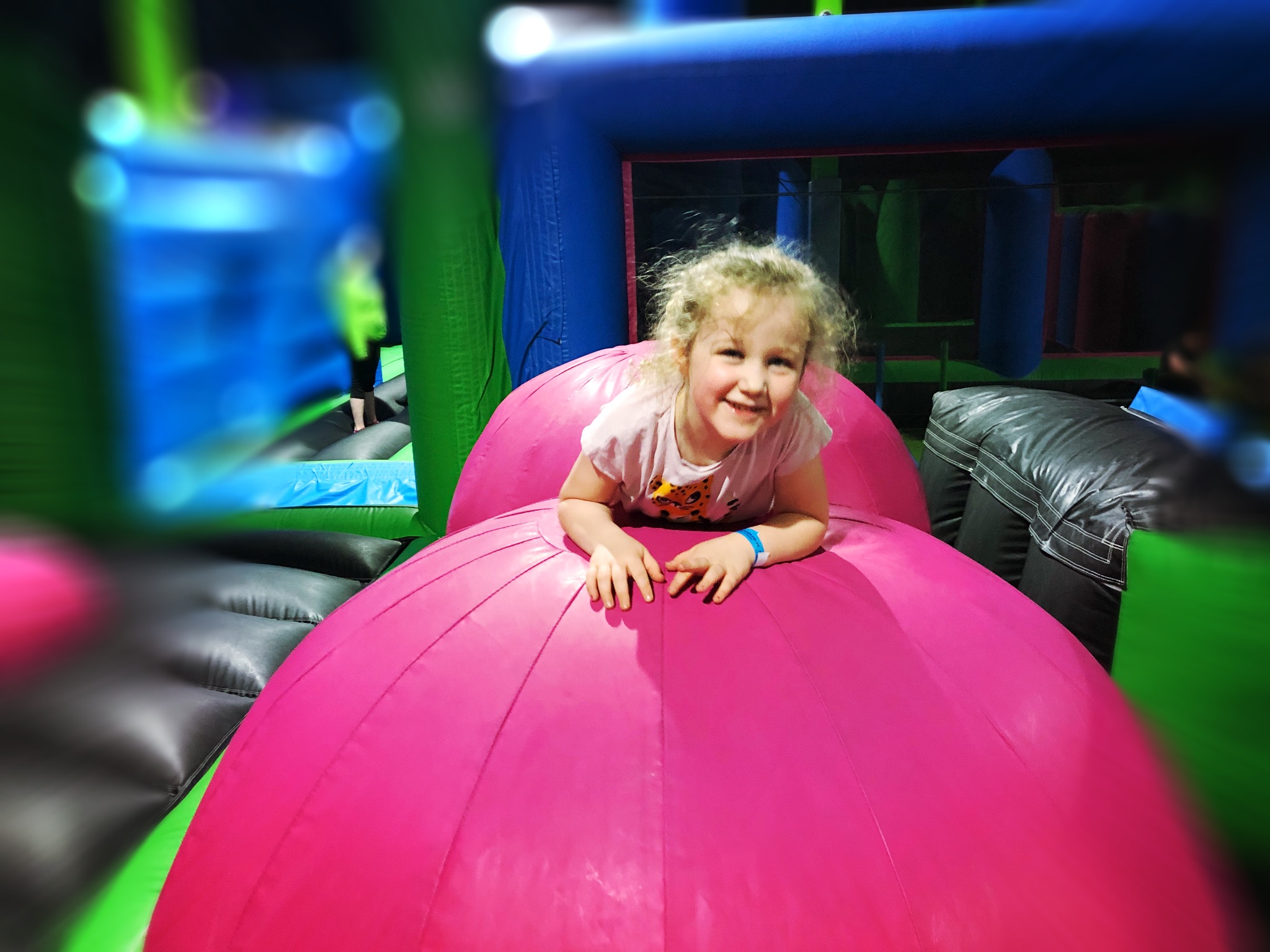 We went along to check out the new inflatable play area at Flip Out Glasgow as a wee after school treat the other day. There are a ridiculous number of things to bounce on and we had so much fun. All of us!

Flip out is now sort of in two halves – one half is inflatables and the other half is trampolines. There are a few other bits as well, like the ninja warrior course (for older kids/adults) and their soft play area and big twisty slide. The trampolines still make up a lot of the space in the arena but the inflatables have taken up a good chunk of it too.

(I have written about Flip Out once before, when we went to check out the Mini Flippers sessions for pre-schoolers. You can check that post out here. They didn’t have the inflatables back then, so this new one is lots more about those!)

There are inflatable slides and an inflatable hill to climb/bounce down. There’s an inflatable maze with bits to climb and bump your way through. And there’s a wee assault course which has bits to climb up and slide down, a ball pool and ends with 3 side by side slides, so you can race down!

There’s also a set of 3 giant balls you can jump along. The kids absolutely loved those. I tried them and they’re slightly more difficult than the little lady made it look… I was knackered by the time we’d played in here a while and we hadn’t even made it into the trampolines yet.

We had jumping basketball competitions. (I won, with a rather large height advantage.) We attempted to jump up a wall and failed miserably. We 90’s Gladiators style fought with some big soft batons, on a plank over a foam pit. I’m the only one tall enough for the ninja warrior courses so we gave those a miss this time.

Their little kids area has been replaced by the inflatables so those are totally gone (as is the football area). However the bit that used to be the dodgeball zone now has a wee foam pit in the corner and seems to be aimed at little kids. Which is good to still have a wee area where they can play without bugging folk trying to do trampoline tricks!

When our time was about up the kids went into the soft play area and had a wee play in there to finish. The soft play is good for little ones and slightly bigger ones as it has a separate area for very little kids with a small slide and some soft blocks etc.

There’s also a bigger play frame that both of mine loved clambering around and heading down the big slide. The only problem was that they were so sweaty by this point that they just kind of stuck to the slide and wouldn’t slide down! It didn’t phase them – they just pulled themselves down anyway and went straight back up again.

Now that the big inflatable bit is up and running there’s absolutely loads to fit into an hour. The only problem was that nobody wanted leave at the end of our hours session! (Fear not, I did manage to bribe them AND avert a tantrum from the littlest. With snacks. They’re both all about the snacks.)

If you go after school with your kid, prices are £7 each for adult and kids for an hour – at least 1 adult has to be jumping. Standard entry is £11 for over 4’s and adults so £7 is a pretty good deal!

Flip Out and their inflatables are much fun! Honestly. Even though a few bits have been taken away to make way for the inflatables, the addition of the big inflatable play area has made Flip Out even better. Between the two different sections there is loads to fit into an hour and we were kept going the entire time. We could easily have spent more time there. If the hanger hadn’t started to set in…

I had a brilliant time jumping about in there. The kids did too. They absolutely loved it! We found it was such a good way to spend an hour after school, burning off all that excess energy that kids always seem to have. We’ll definitely be back.

Flip Out is located at 89a Southcroft Rd, Rutherglen, Glasgow G73 1UG. ﻿