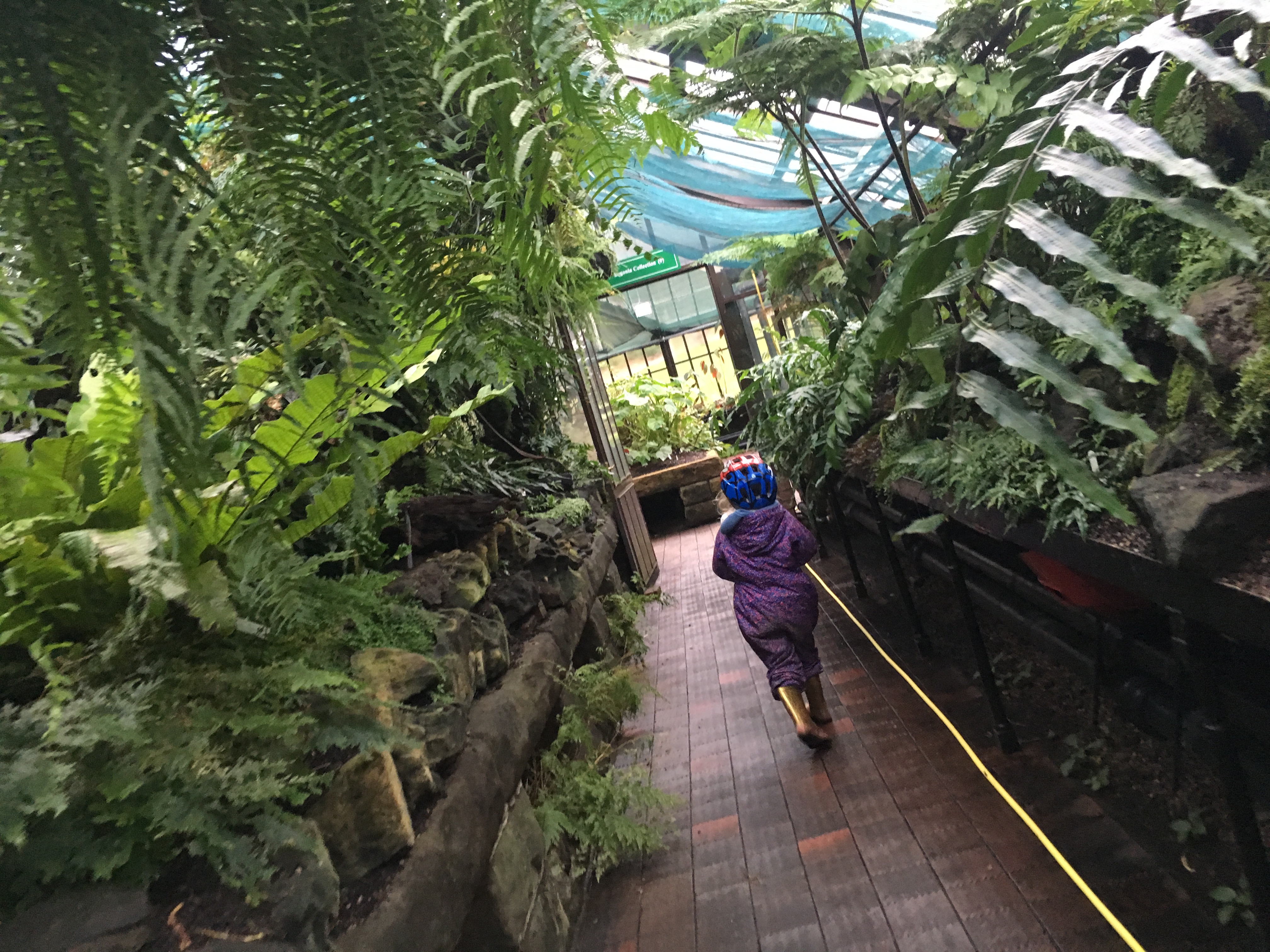 I love a wee trip along to the Glasgow Botanic Gardens; with or without the kids. I’ve taken them for a run/scoot around there a couple of times in the past few months and they both have a great time.

I do too. There’s a playpark, lots of space to run around and if we get too cold, a couple of nice warm glasshouses to explore! 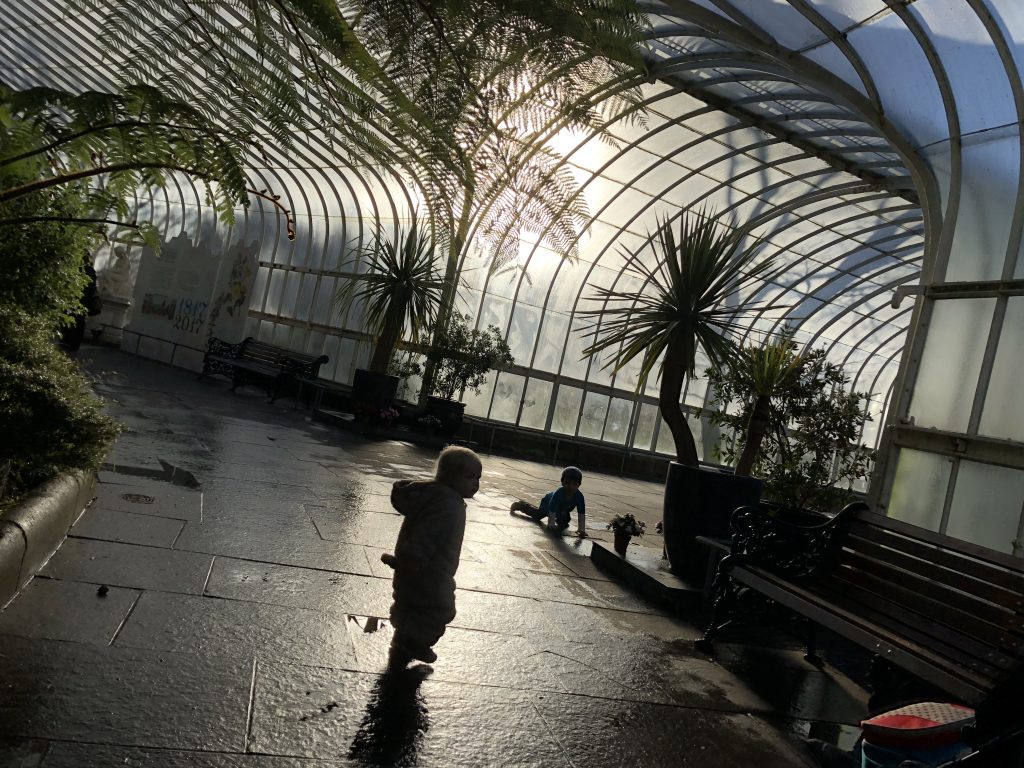 We all really enjoy a wander around the Kibble Palace. It feels a little bit like there could be some dinosaurs in amongst those giant plants (you know, if you use your imagination), so we often go on a hunt to see if we can find any. We haven’t yet, but you never know. 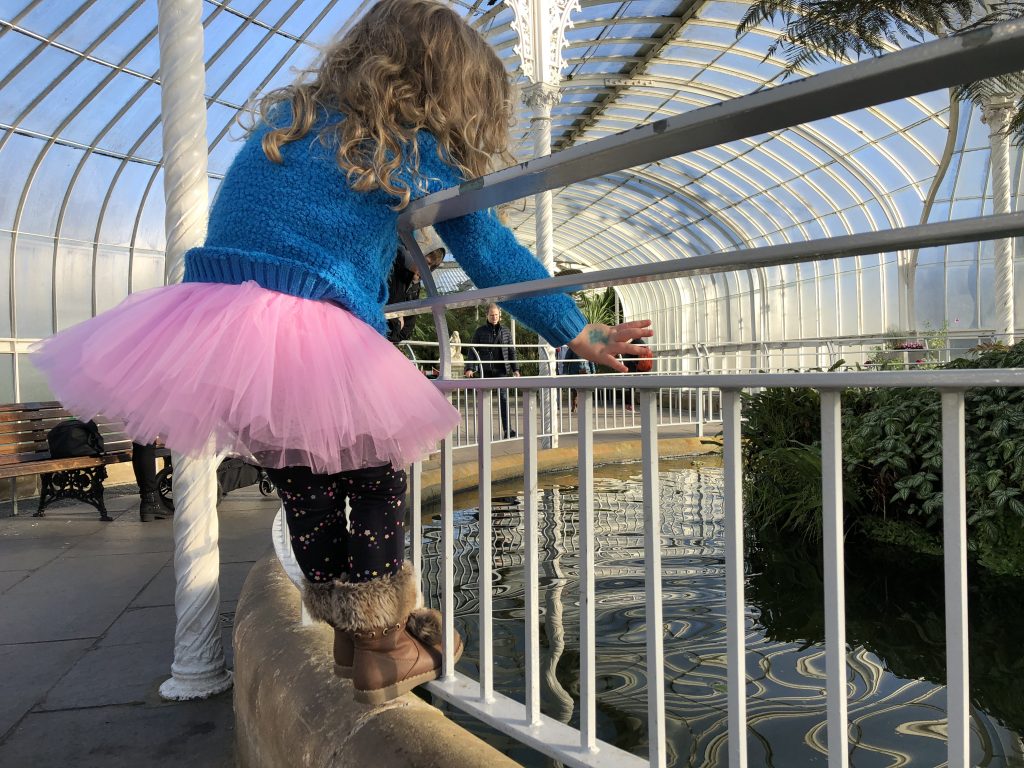 The other greenhouse has a couple of rooms full of cacti. I usually drag them in there to see those as well. Because I have a thing about cacti. Though the little lady does like bit of slapstick comedy – she loves pretending she’s been stabbed in the hand by a plant.

There is a little playpark just up the hill. It has swings and spinny things and a slide and a climbing wall and a few different musical toys. The little lady really likes this playpark. It’s not massive, but it’s perfect for her age. 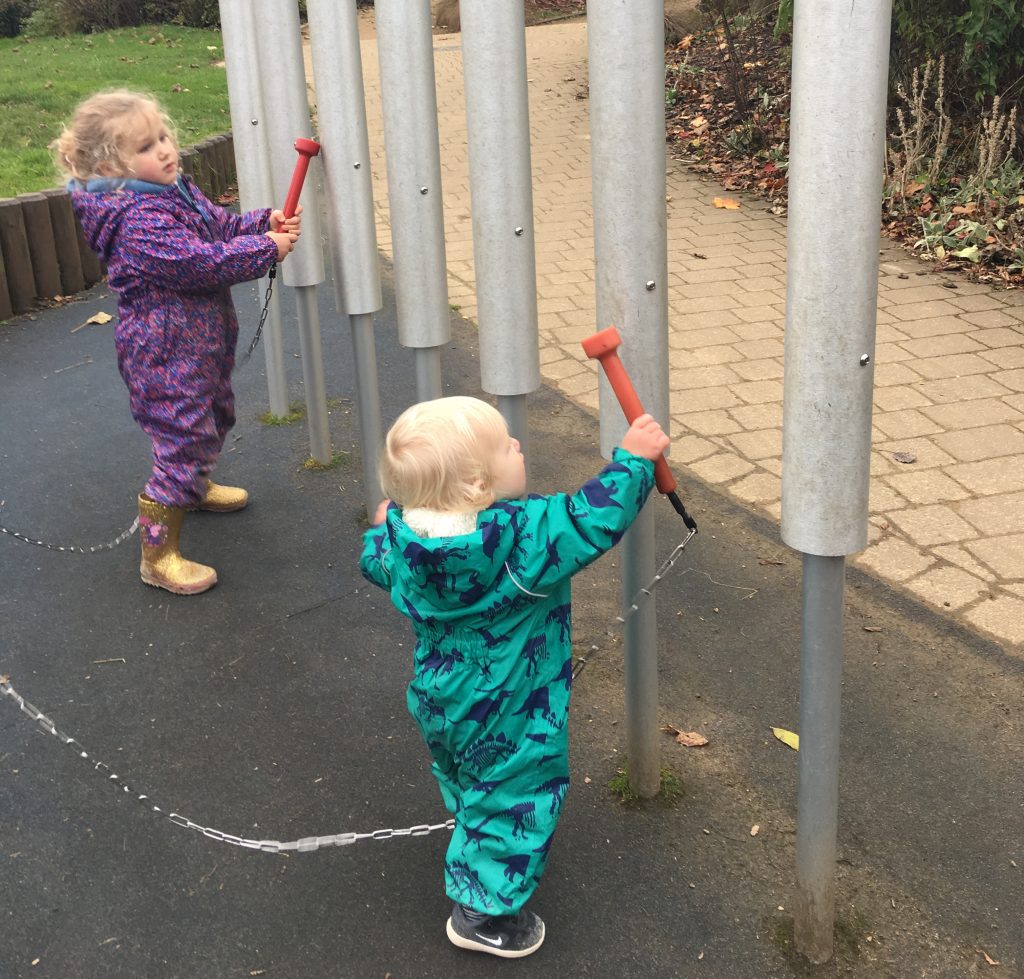 It’s not the best for very little ones though; baby boy wants to go on the slide but he has no common sense at all and isn’t at the stage where he listens to anything I say yet. He can go down the slide himself, but he can also fall off every single side of the platform while he does his excited stampy dance, and my nerves can’t take it.

There is a baby swing though, and there are a couple of musical toys he can use. 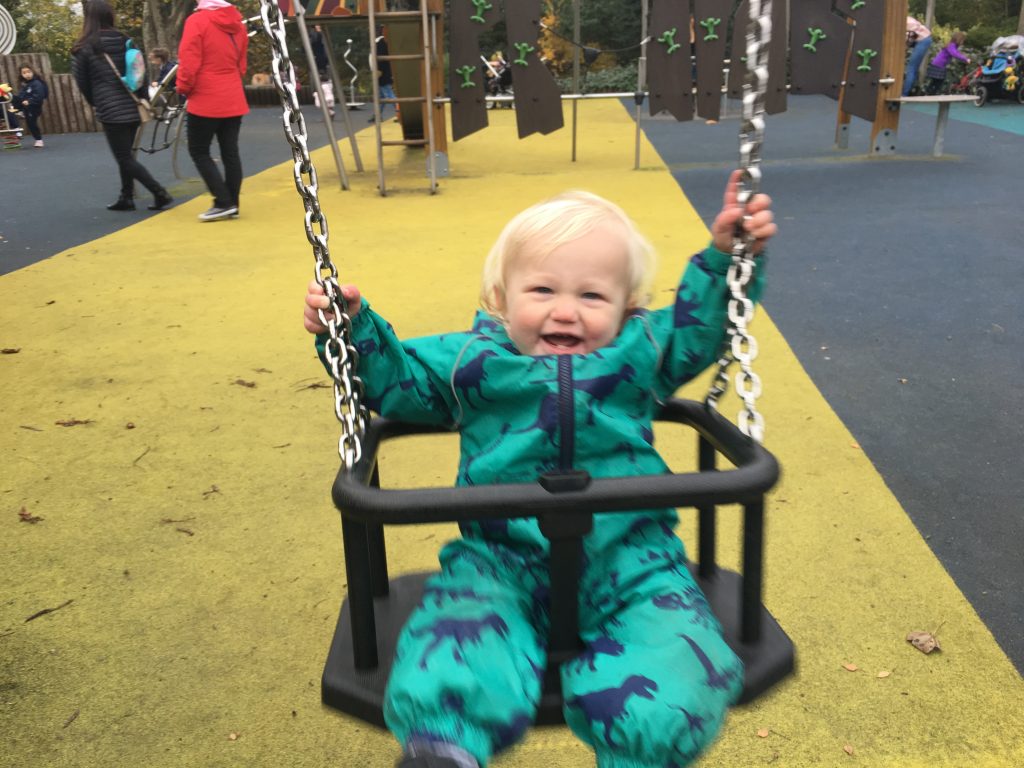 There’s lots of space to just run about in. Or have a picnic in. And the paths are smooth, so they’re great for scooting or cycling on. There are quite a few smooth hills too which the little lady loves. (Those helped her to learn how to brake…!)

The Arboretum is at the back of the botanics, just off Kirklee Rd. It’s nice for a walk around and if your pup likes the water there’s a couple of shallow bits there they can get in. (Warning: the river flows incredibly fast when it’s raining, so be careful!) 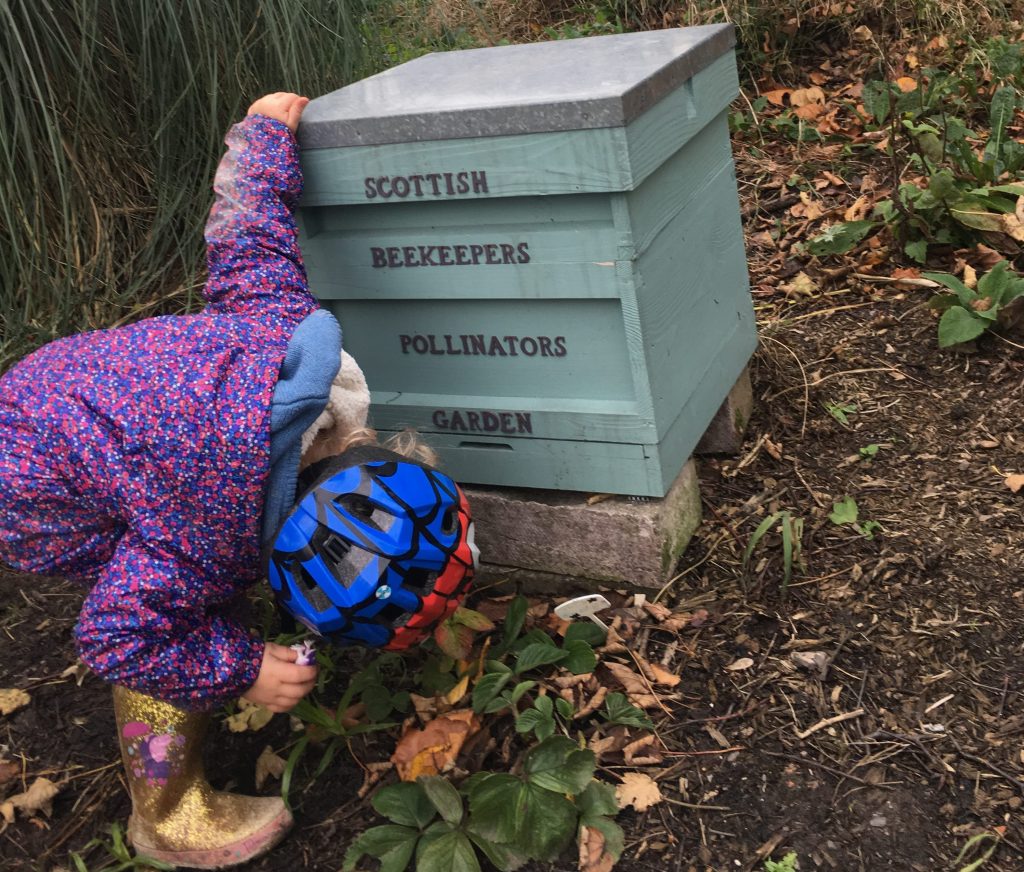 From the Arboretum, (or over the Ha’penny Bridge if you want to miss the Arboretum out), you can walk along the Kelvin Walkway all the way to Kelvingrove Park. It’s a nice walk, but it can get quite busy if it’s a sunny day.

There are a couple of food vans situated inside the main entrance to the Botanics. I’ve never actually bought anything from them so I can’t comment on what they’re like. 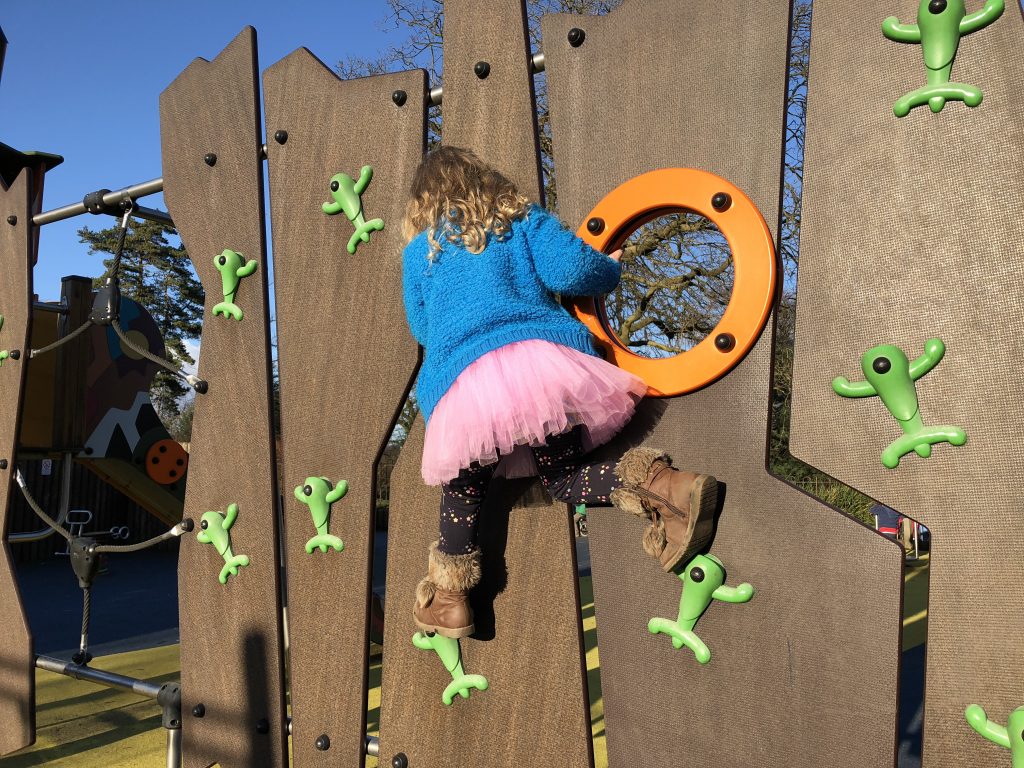 Dogs are allowed into the Botanic Gardens, though they do need to kept on lead. They aren’t allowed into the glasshouses. I usually just pop our pups’ lead around one of the benches outside the main door and she sits on the grass behind them. We’re never inside for that long anyway. Besides, she’s a pretty mellow soul and doesn’t mind having a lie down while she waits on us. 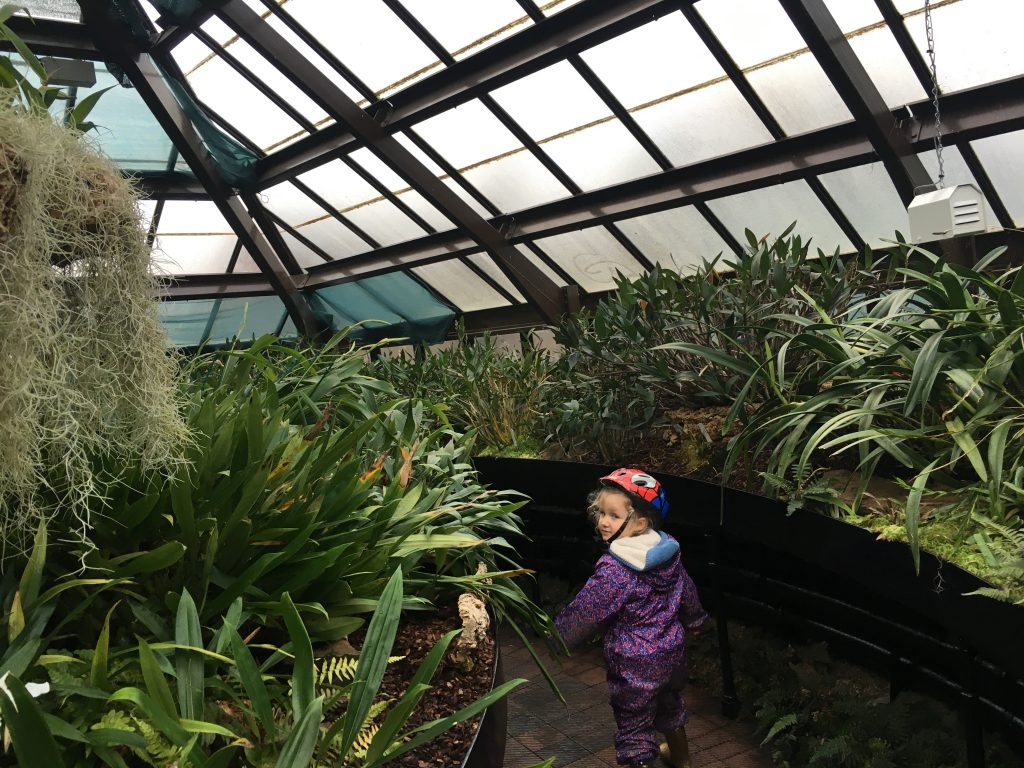 The Glasgow Botanic Gardens are a lovely sanctuary in such a busy corner of the city. The playpark is fun and there is so much space for the kids to run free. The Botanics are the perfect place to let the kids let off steam without travelling too far or spending any money. And as a bonus, I get to go look at gigantic cacti every time too! 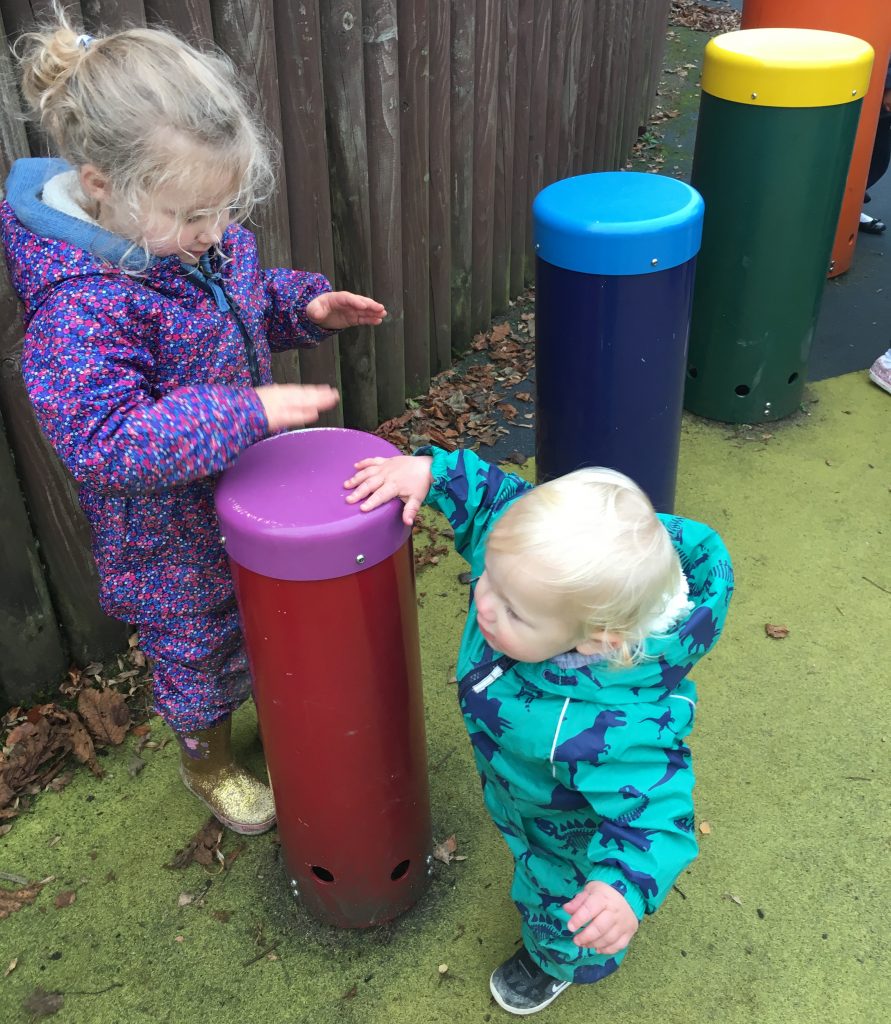 The Glasgow Botanic Gardens are located at the corner of Great Western Road and Queen Margaret Drive in Glasgow’s West End.