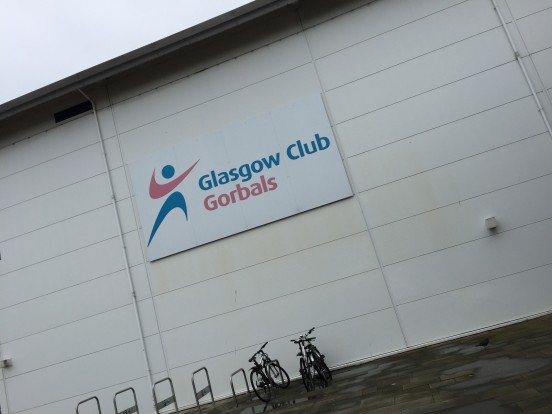 We hadn’t been swimming in ages and we’d heard that the Gorbals pool is good for kids, so we gave it a go.

There are two swimming pools. The main pool is for ‘proper swimming’. It has lanes on one side and a larger unlaned area that’s good for having a wee swim with kids; for example if you’re practising your baby swimming. 🙂 It’s still pretty warm – certainly not cold like Tollcross pool.
The second pool is a zero-entry pool (sloped entrance like a beach). It’s nice and warm, and is shallow enough at the top to let tiny littles sit and get used to the water, or run and leap around in! As it gets deeper it turns into a little lazy river with rapids that go around a little area that appeared to be a jacuzzi that wasn’t on, (which meant it was a great bit for jumping in!) There were a bunch of floats and pool noodles/woggles you could use to go round the rapids.

There’s also a flume, but we didn’t go on it. It was closed when we were there, but I made the assumption it was for quite a bit bigger kids anyway.

It’s a Glasgow Life pool. They’re pretty standard, generally. They are basic and not the loveliest in the world, but not the worst I’ve seen either.

There were quite a few family change rooms (which are a really good size). The family change room we were in had a seat attached to the wall that you can strap your little tearaway into if need be. The straps were broken though, so it didn’t work.

It’s 20p for lockers, and apparently they’re really fun to climb in.

It’s £3.20 for adults if you’re a non-member (free for members) and free for kids under 5. With a YoungScot Kidz Card it’s free until they’re about 19.

It’s a nice, warm pool so it’s great for teeny tinies. We still have a warma on, but the little lady lasted ages in there. With the rapids etc. there’s enough there to entertain the younger and older kids. Excellent.

2 thoughts on “Swimming at the Gorbals Pool”