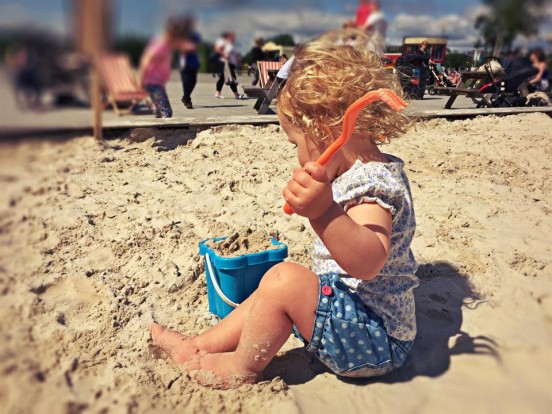 We’re at the beach today! Not in the usual sense though. We’re in a giant sandpit (aka the Beach at Riverside) and it’s really nice.

It’s been here for a few summers now. But I’ve never been before, so I was pleasantly surprised at how big it is, and at how deep the sand is. The sand is really soft and lovely too.

There are some sun loungers dotted around outside the sandpit. A number of them had towels or bags or something on them to signify that they were ‘taken’, even though there were no other adults at all except me in the sand with the kids. Not that I wanted a sun lounger. But that just irritated me and reminded how much I sometimes really hate other people.

Anyway, it’s a really nice little beach for the kids to potter about in, and it’s right at the door of the Riverside Museum if you wanted them to have a play in there too. There is an ice cream van and a hot food van next to it, and a cafe inside the museum.

Just bear in mind that we live in Glasgow, and as such the sand will probably be a little bit damp. I took a picnic blanket just in case, but since I was playing in the sand with the little lady I didn’t use it.

Make sure you remember your buckets and spades! 🙂 It’s great fun!

The Beach at Riverside is located at the Riverside Museum, and it’s here until the 1st of September.