We’ve been going to zoo tots for a few weeks now, and it’s one of the little lady’s favourite classes we’ve been too. It’s totally different from any of the other classes, mainly because there are various live animals there to pet or feed or look at.

The class structure is pretty much the same each week. There is a bit of play time at first until everyone arrives. Then there are 4 different animals for the kids to meet each week; so far we’ve met ducks, chickens, a skink, a pretty big snake, various insects, guinea pigs, teeny tiny mice, and of course Snowball the rabbit. (Snowball is the little lady’s favourite pretty much every week.) The kids then get to feed the animals a few leaves or carrots (usually by poking said food into a cage). Some of the animals eat it, some don’t. And at the end they bring out the parachute to play with before it’s home time.

A couple of the animals have had to stay in their little crates (I wasn’t too bothered about meeting the tarantula anyway…) but the kids get to meet most of the animals. The tots also get to hold some of them, with close supervision. Snowball the lovely white rabbit always comes to say hi at the end. All of the animals are clearly very used to being handled and they are really great with the children.

The staff are great with the kids too; they are very entertaining and somehow manage to keep the attention of about 30 tiny tots when they are introducing the animals. 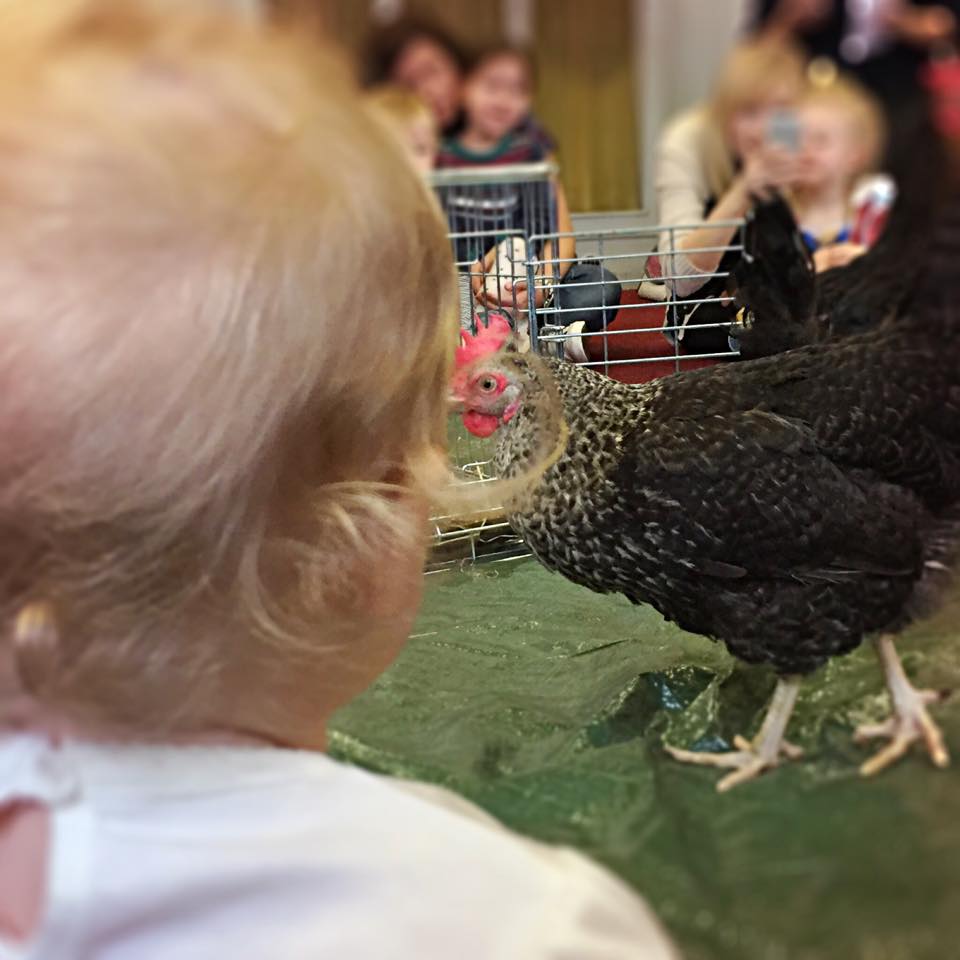 Zoo Tots supply anti-bacterial hand wash for the kids and adults to wash their hands after touching the animals. Thinking about it, this actually may have been the little lady’s favourite part of the class and not Snowball the rabbit. Snowball definitely came a very close second though.

They also have a table set out with teas and coffees for the adults. All free.

The biggest problem I have with the class is that it’s completely manic at some points. So much so that it stresses me out. I feel that in our class (we’ve been going to Zoo Tots in Giffnock) they have too many children; I’ve counted 30 children each week, and along with their adults that’s at least 60 people in a room. Don’t get me wrong, I don’t think it was unsafe or anything like that. It was just really hot and quite intimidating for the younger kids. With fewer children it would be more comfortable for everyone.

Not only that, but because it’s so busy, some weeks the kids hardly get any time with the animals (which is kinda the entire point of the class). With a couple of fewer children in the class there would be more time for the kids with each animal which I personally think would be much better for everyone.

I also think that it might be better if there were separate classes for the teeny tiny tots and the bigger pre-schoolers. Two reasons. Firstly, the little lady and the other smaller toddlers tend to get shoved out of the way by the bigger kids. They’ll stand there waiting patiently with their hand out for a bit of carrot for ages whilst the bigger kids get to the front. Secondly, the babies and tiny tots are obviously quite different from the older pre-schoolers and I do think that a separate class tailored to each of those groups separately might work better.

Edit: Class sizes have been reduced in Giffnock and are far less crazy now.

If you want to book a single class it is a bit pricey at £8.50 per class. However you can do a block booking of 4 classes for £26.

The class is pretty crazy, but really good fun for the tiny tots. With the exception of the chickens, the little lady has loved every single animal that she’s met. And there’s no way she would have met most of those animals had we not gone to Zoo Tots. It is really exciting for her to meet them and feed them, and it’s lovely to see her interacting with the different animals. She really really enjoys it. I just wish I could say the same.