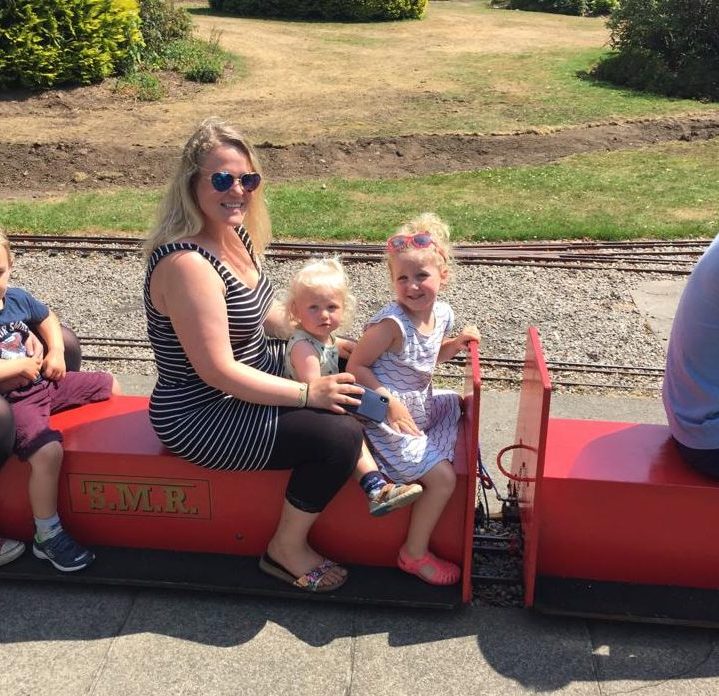 This was a spur of the moment, late summer trip that we took one morning when we had a few hours just the four of us. Strathaven Park and their model railway was one of the places on my summer bucket list – in fact it’s been on it for a few years. But I’d just never managed to get us there until we had the longest summer ever and could spend almost every day exploring outdoors.

Strathaven Park is located in South Lanarkshire in the small town of Strathaven. I remember it from when I was a kid. Especially their wonderful miniature railway. I remember asking to go here every time we were having a day out! The park was exactly how I remember it, and just as much fun.

[Note: We went on a weekend when we knew that the model railway and all the other activities would be open. If you’re planning a trip, check online to see if the railway is open.]

Strathaven Park seems to be in two different parts; there’s a big grassy hill with a bigger playpark up the top, trees dotted around and a bandstand near the bottom. There’s a little burn at the bottom of the hill and across the bridge is the model railway, while over to the right is a smaller playpark and the boating pond and then some other activities just past the pond. (I looked the park up for some info and it turns out it is two different parks; the John Hastie Park and the George Allan Park!)

Anyway, there are two playparks. The big playpark at the top of the hill is aimed at slightly older kids. It has a zip slide, some big climbing frames, spinny things, swings and a slide. Baby boy couldn’t do too much in here as he was too wee, but the little lady absolutely loved it. The small playpark down next to the pond is for toddlers/pre-school kids. It has some baby swings, a little slide, spinny thing and see saw. Both the kids liked this one.

The boating pond has a bunch of pedal boats in it. You need to pay for these in the bowling green office but if it’s not busy you can pretty much spend as long as you like on them. The little lady and her daddy went on together and spent a while pedalling round and round the island.

There was also a bouncy castle and some cars when we were there. I’m not sure if these were temporary though; just at the weekend during the nice weather. We didn’t do any of the other activities but the putting green is down here as are the tennis courts and bowling green.

The burn was quite low when we were there so we could hop down onto the gravel next to it and have a splash. There were quite a few families with nets & glass jars for checking out whatever bugs and beasties and fish were in the pond. The little lady was happy splashing stones into the water.

The model railway is run by volunteers from the local model railway society. You pay your pound and get a little ticket from the conductor and when the train is ready you go and take your seat. The train driver gives a little spiel about keeping your arms and legs in at all times and then you get a wee toot toot as you set off. It’s a little model steam train so it puffs it’s way around the track and is honestly one of the cutest things I’ve ever seen.

The staff manning the railway are so lovely and if you have any questions at all they are more than happy to answer them. I can’t tell you how much I loved this! (My kids also liked it.)

Strathaven’s miniature railway is such a great little attraction. I remember it from when I was a kid and, as far as I can recall, it hasn’t changed too much at all. Which gives it even greater appeal to be honest. I’m not sure if it’s changed all that much from when it opened in 1949!

Strathaven Model Railway is open seasonally from Easter until the end of September and is usually only open at weekends.

Park entry is free. The railway costs £1 per person. The rest of the activities (the pedal boats, bouncy castle, mini golf, etc) vary, but start at £1 per person.

Strathaven Park and their model railway is one of my favourite memories from last year. I went on that wee train (with the kids) about 4 times and I loved it every time. (So did the kids!) It’s such a fun activity, not just because its so nostalgic for me. Along with the playparks and having our picnic we had a fantastic afternoon out here. Really great fun.

Strathaven Park is located at Strathaven, ML10 6EF, just over a half hour drive from Glasgow.