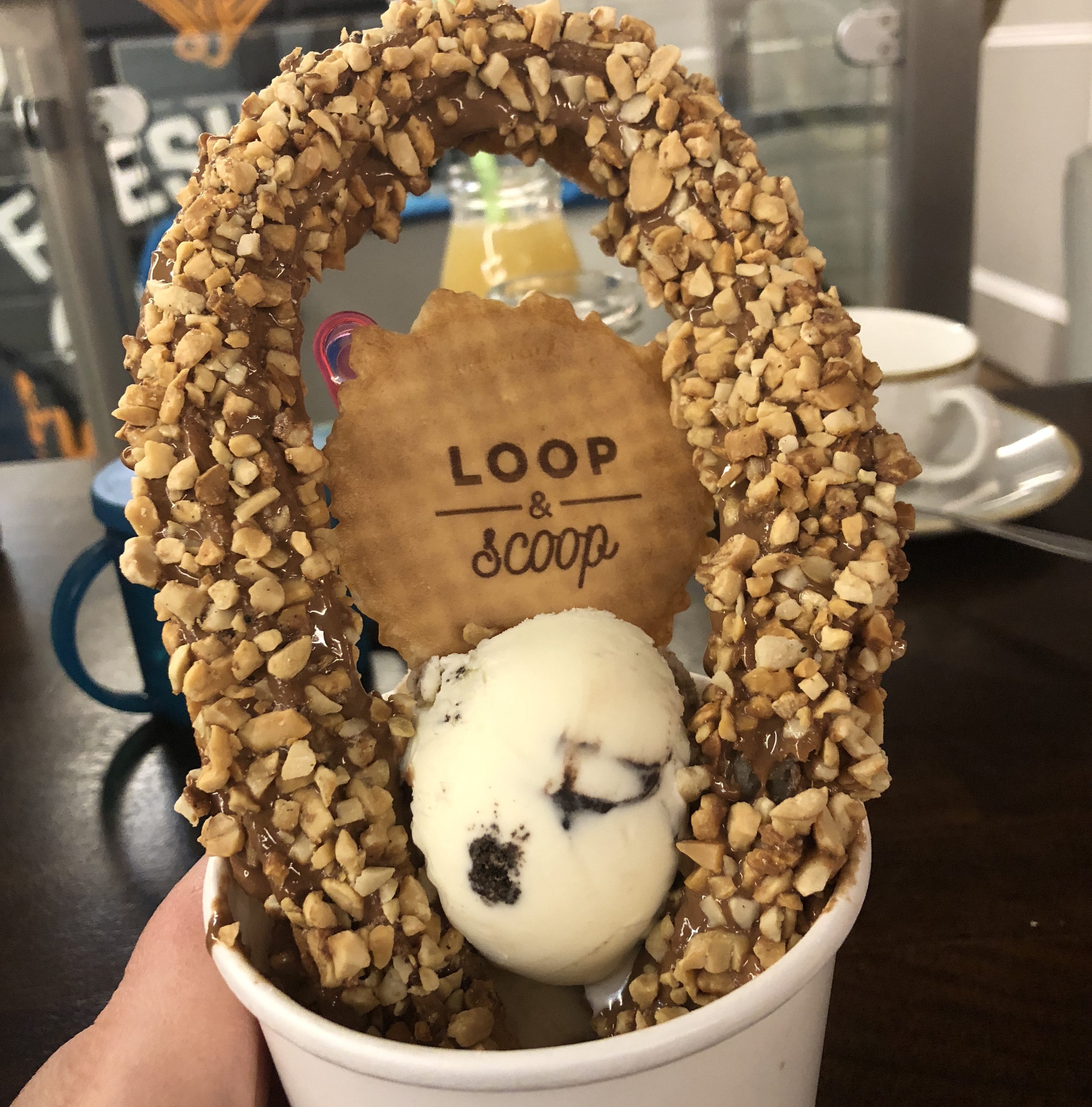 I don’t often take the kids out for ice cream in the middle of winter. But we’d been at the Botanics with some friends on a chilly afternoon and we were pretty freezing. And I really wanted some churros and a cup of tea. So we headed across the road to Loop and Scoop for some tasty treats.

I’d heard about Loop and Scoop from a few friends and had been planning on checking it out for a while. So everyone being freezing just a few blocks away was the perfect excuse to head along. 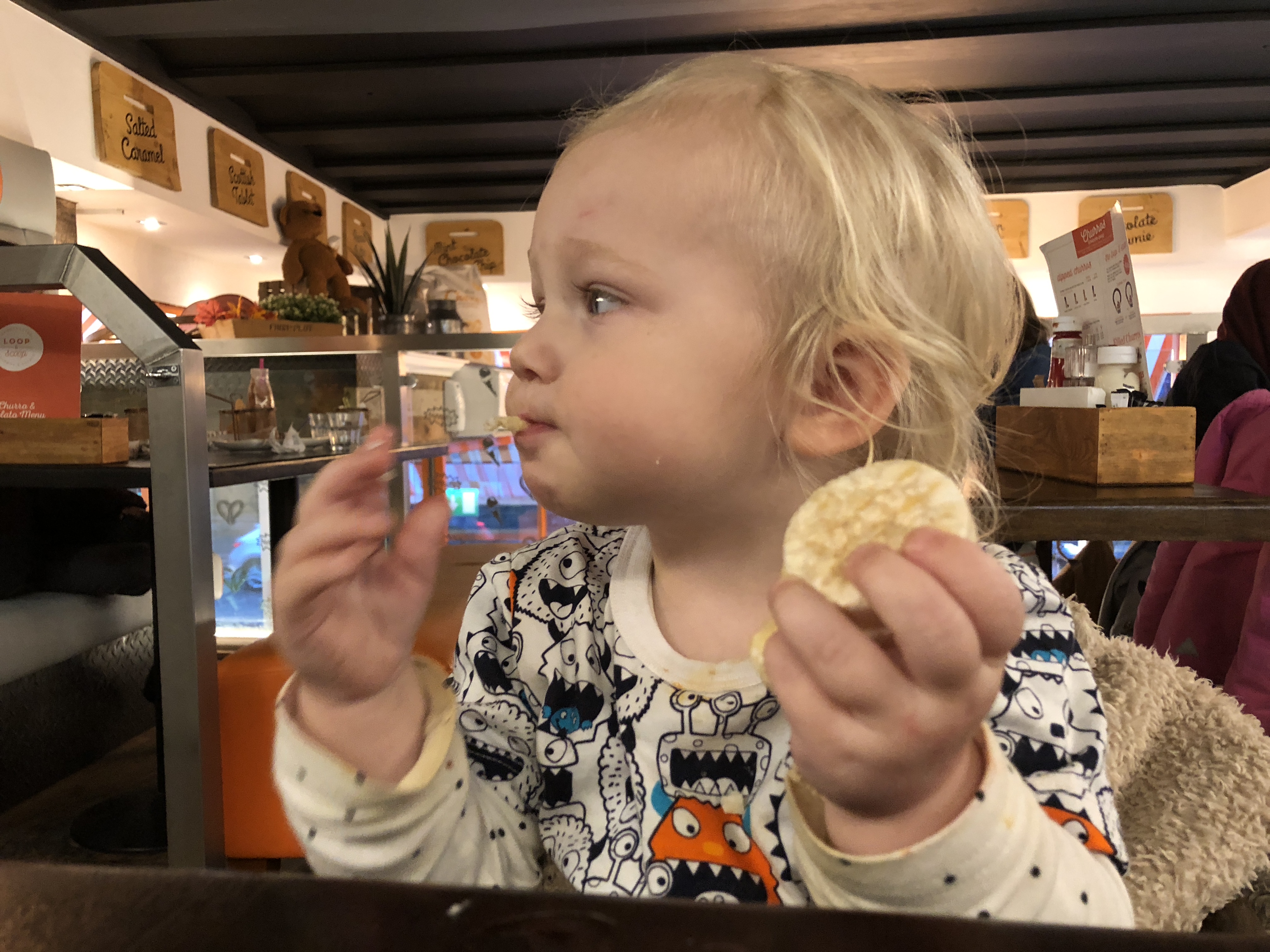 It was that time of day where the little man wants nothing other than to run round and round whatever piece of furniture is available to him, so when we got our table we headed straight back downstairs to order.

I knew I was having a churro of some sort and the little lady knew she was having a tub of ice cream; she wanted to see them so she could choose which ‘colour’ (flavour) to have. 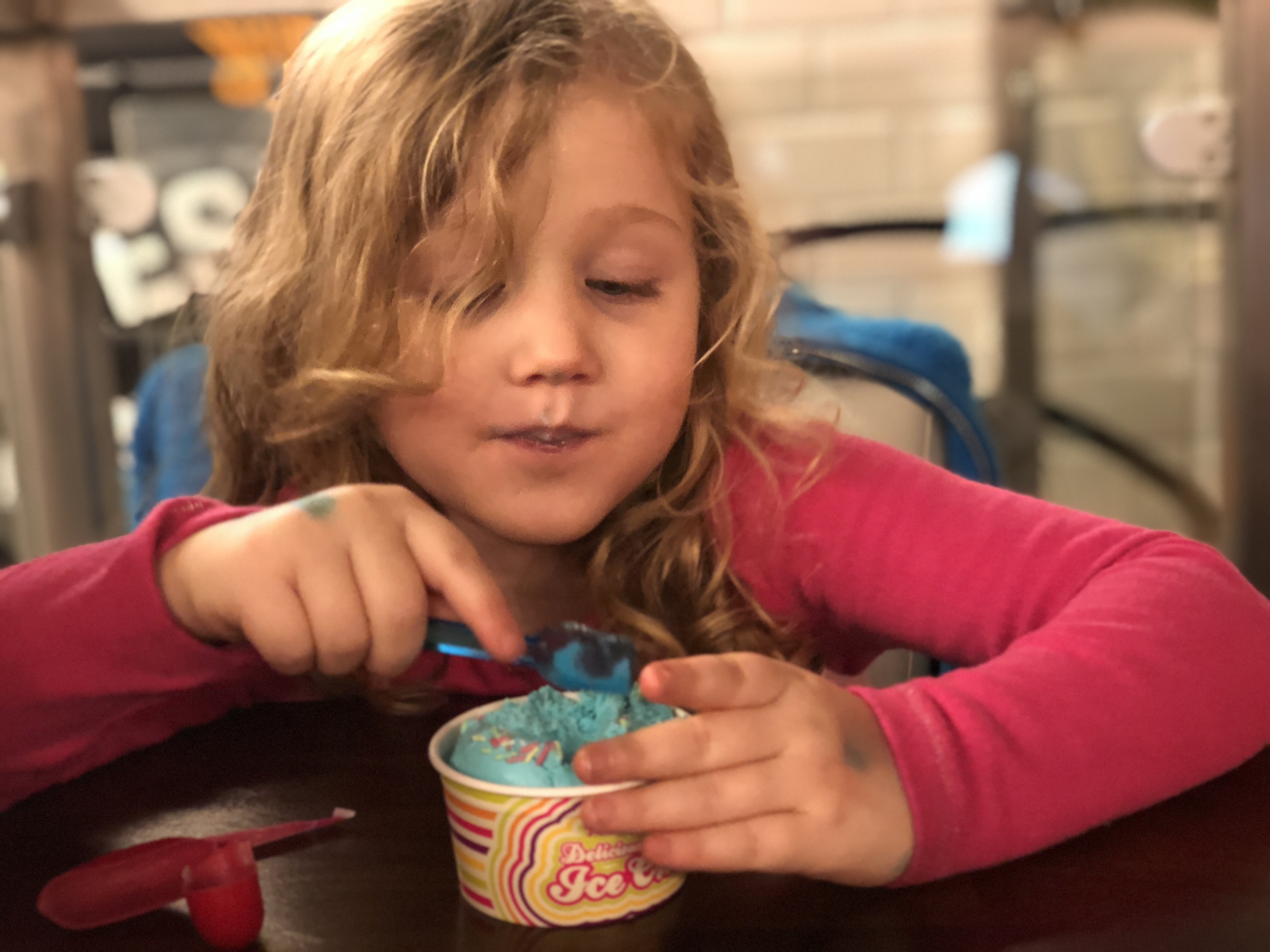 She obviously went for the bright blue one – bubblegum. With multicoloured sprinkles. I landed on one of their signature Loop & Scoops. It’s in the name after all; what else was I going to have?

I had the Choconut loop & scoop: a big churro loop drizzled with chocolate and sprinkled with nuts, along with two scoops of ice cream. (Looking back, it does sound pretty colossal, but it was totally worth it.) It was as delicious as it looks.

I did try the little lady’s bubblegum ice cream and it was… bubblegummy. I’m not a huge fan of bubblegum flavoured anything, but she absolutely loved it. She rarely eats a whole ice cream (meaning myself or her daddy usually get some) but not this time. This was wolfed down. 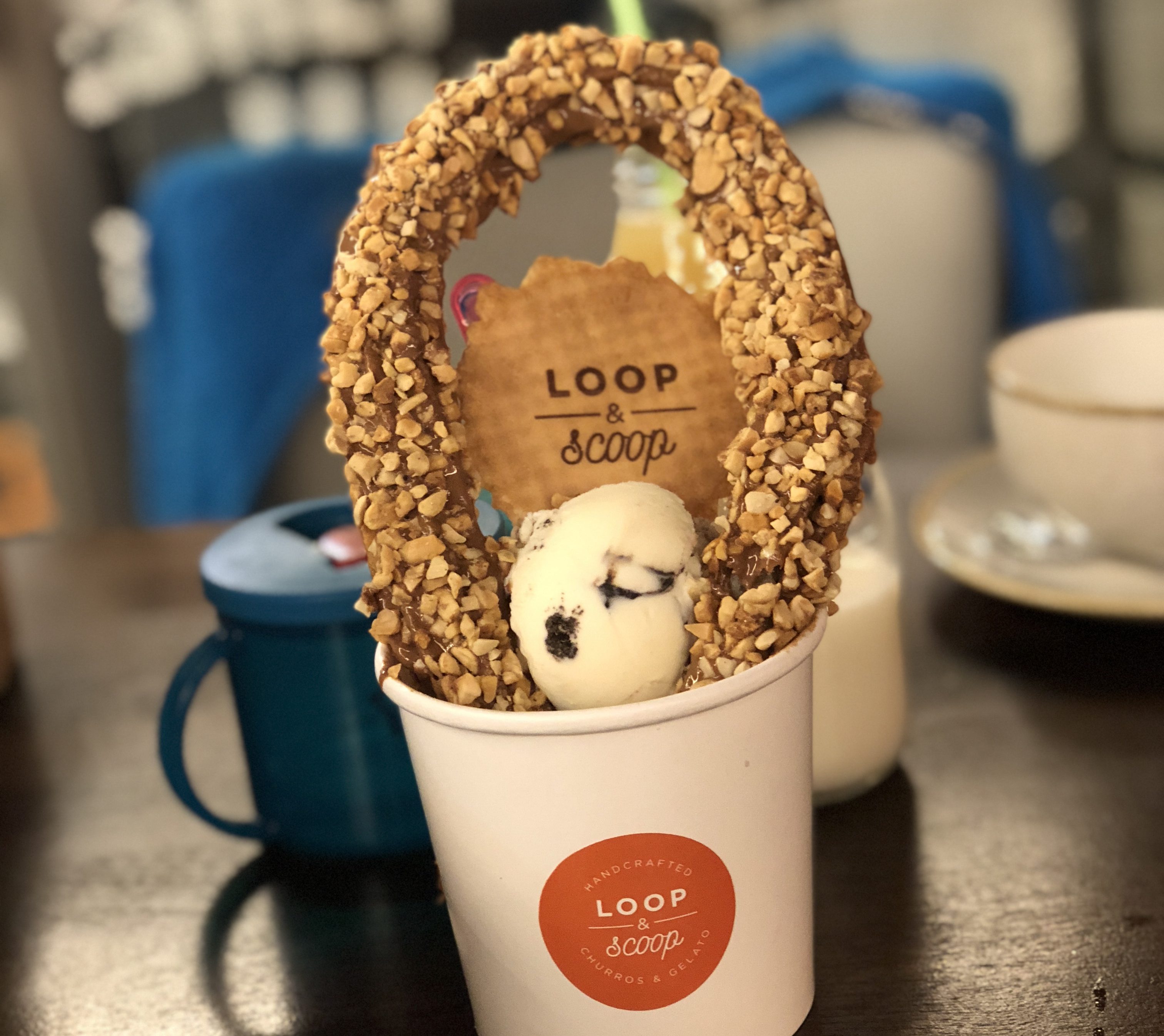 I love a churro. You don’t often get very good ones around these parts, but this one was hot and crispy at the ends and soft the rest of the way through and utterly delicious. The chocolate and nut toppings were perfect with it too.

The little man was quite happy munching his own snacks until he got wind that there was something much sweeter on the go. Turns out he really likes a nice chocolatey, nutty churro. Who’d have thought…

He really liked playing with the empty tub (I’m sure he thought he was getting something good). Next time he’ll probably expect something left in it for him though. 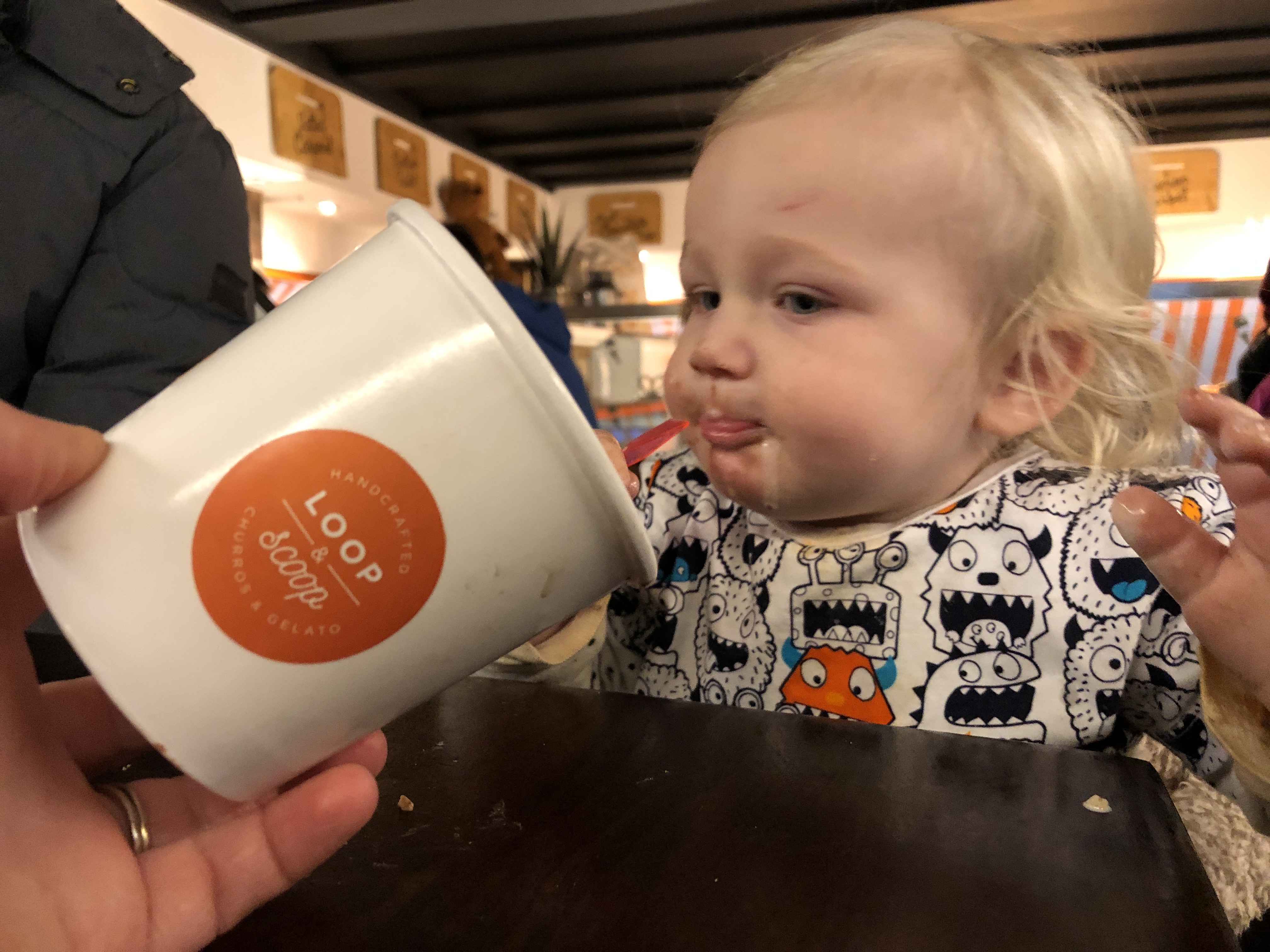 It’s a great little place to drop in for a treat. Even in the middle of winter. The staff were incredibly helpful and the ice cream and churros were absolutely delicious. We all loved it!

Loop and Scoop is located at 665 Great Western Road, Glasgow, G12 8RE.