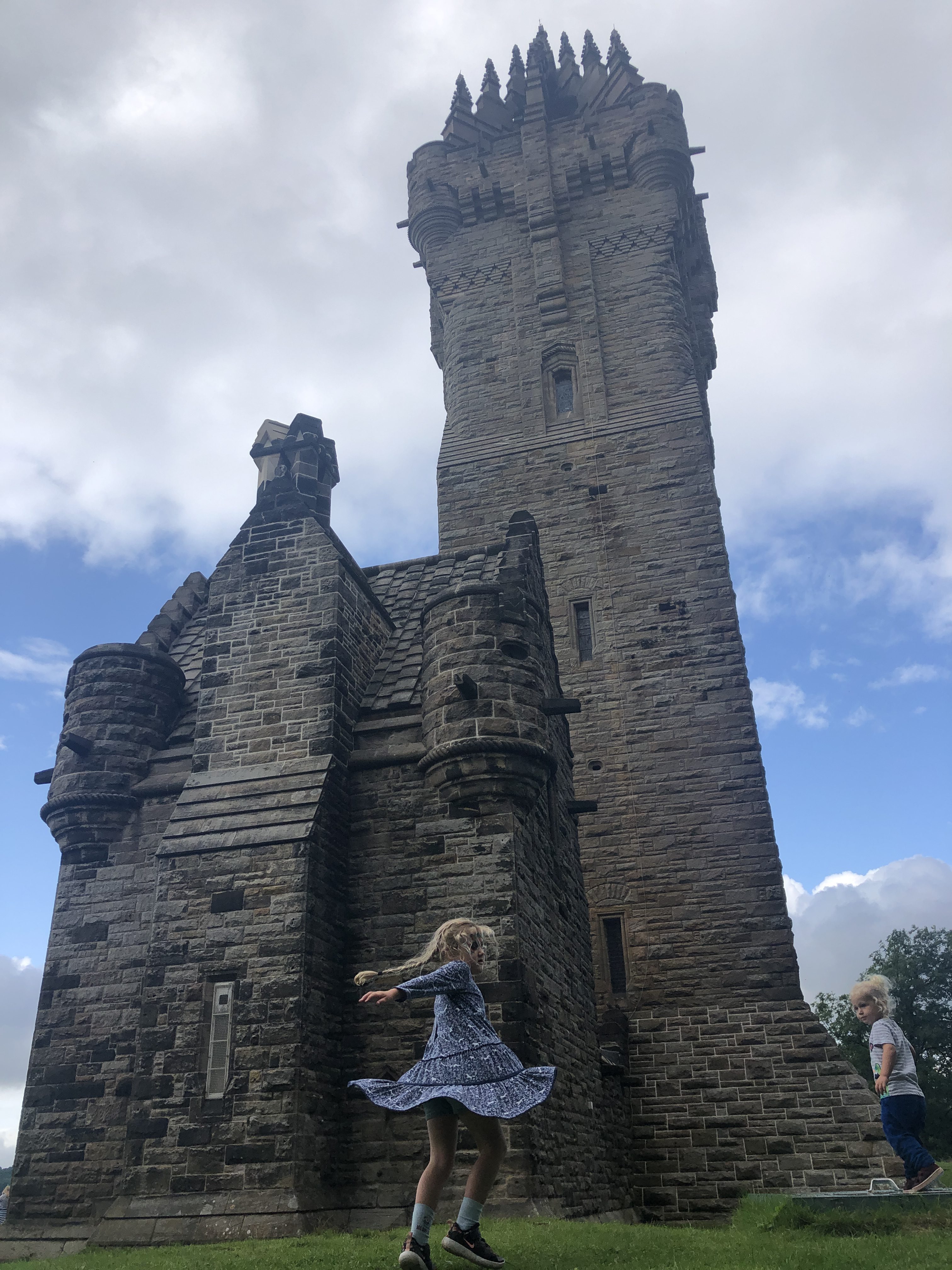 Built in the 1860’s, the Wallace Monument is that iconic gothic tower standing on top of Abbey Craig, overlooking Stirling and the scene of Wallace’s greatest victory at the Battle of Stirling Bridge.

It’s a nice wee walk up from the visitor centre to the top of Abbey Craig. There are a whole bunch of carvings along the way which tell you a bit about the history of Stirling.

The kids both loved finding these as we went up the trail (it wasn’t difficult – they were everywhere). The wooden train was a big favourite and we ended up staying and playing at that one for a while!

There are a couple of woodland walks up the crag but we just stuck to the main route up and down.

You’re already pretty high when you reach the base of the monument – before you head inside and start climbing the 246 stairs to the top. It’s a truly impressive structure, towering about you as you make your way up the hill and out of the woods.

When you reach the monument you just head inside, show your ticket if you bought it down at the visitor centre and start your 220 ft ascent to the top. (This one is not for the acrophobics!) You can also buy a ticket at this point if you’re not sure about it before you see it.

You’ll find 3 floors of exhibits on your way up towards the top of the monument. There’s lots of buttons in them & screens to play with which the kids loved. Especially the small one. He’s a big fan of buttons.

The first floor showed a video about the Battle of Stirling Bridge (which the kids sat and watched – it surprised me that I got to actually enjoy some history for once!) William Wallace’s sword is located in here too. An impressive sight in itself.

Their favourite was the second hall you come to en route up, where you can design a coat of arms on a screen. Your design is then projected onto a shield that you can stand beside. Both of them loved doing this. The enjoyed it so much that at one point all the coats of arms on the wall were ones they’d designed.

The final hall is a room full of information about famous Scots. I remember it being all about a lot of dead guys before, not to minimise history. It had some info about Robert the Bruce, William Wallace, this Marquis, that Duke… But now there is the addition of an exhibit in this hall with the works and achievements of some Scottish women as well which was really great to see.

The view from the top of the Wallace Monument is just stunning. You can see for miles from up there. A beautiful view is not something I’ve found my kids appreciate yet though, so they mostly played copycat at the top. (Don’t ask.)

It is pretty windy up here, so take jackets. The kids had a good moan about it being cold before they decided they liked it.

Back down at the bottom, once you’ve navigated the 246 stairs and each of the halls again on the way down, there’s a wee room with some vending machines where you’ll find a bunch of colouring sheets, word searches and kids activity booklets.

There’s one for young kids and a different, slightly more tricky one for bigger kids. The little lady is super keen on puzzles and colouring at the moment, so she really enjoyed filling out her booklet.

The cafe in the visitor centre is pretty good. They serve up all the usual suspects like sandwiches, soup, baked potatoes etc. Their cakes are pretty good. It’s definitely tourist prices but the food is nice.

They are currently offering free annual membership when you pay once, so I guess we’re definitely going back sometime in the next year!

I really enjoy the Wallace Monument. It’s got beautiful views, height, stairs to climb, interesting exhibits on the way up, lots of history and a really nice wee walk to get there and back. The kids had a great time too, with all of the above.