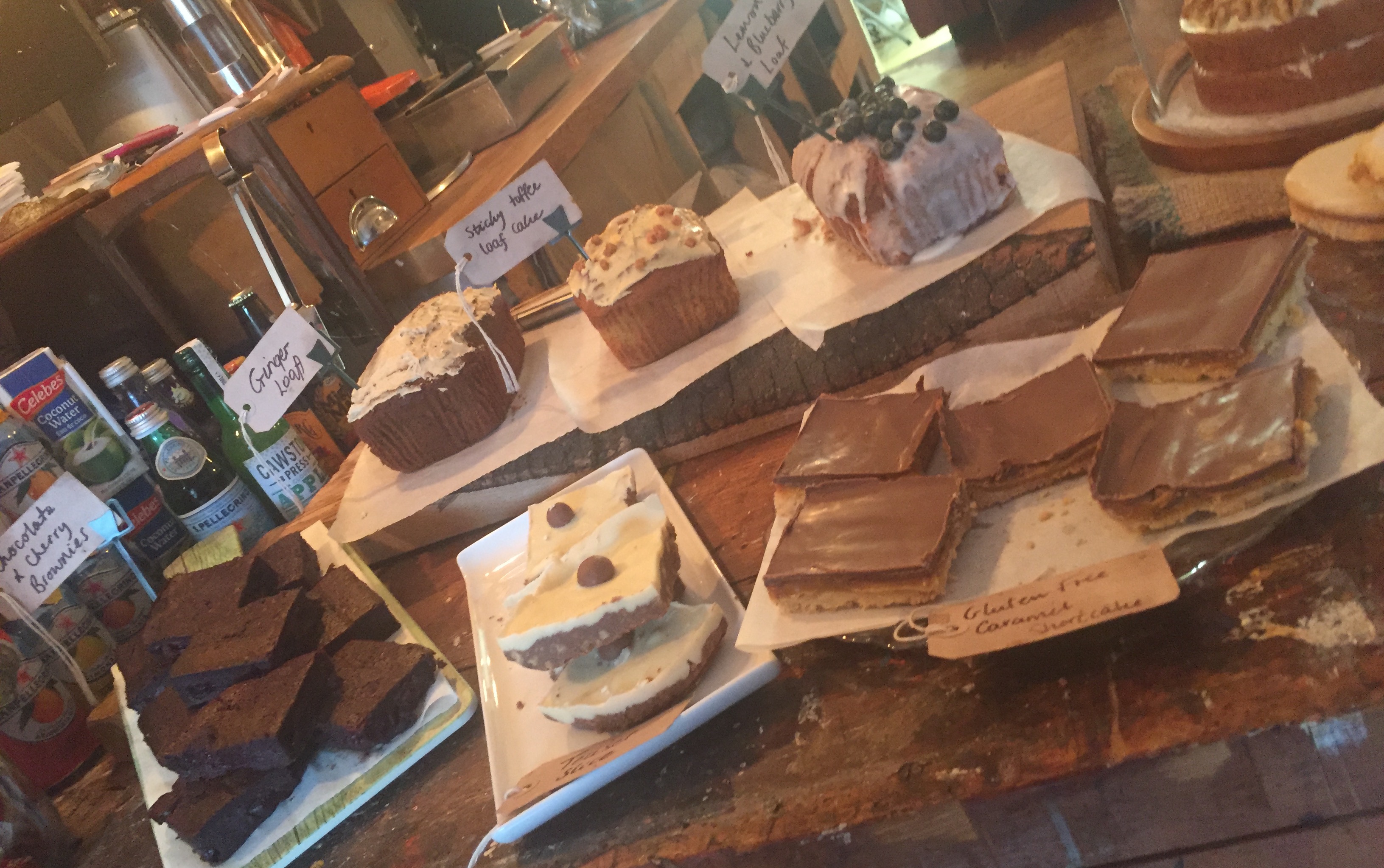 Glasgow is a brilliant city to live in and a really wonderful city in which to be a new parent. It’s big enough that you can always find something to do, and compact enough that it’s easy to get pretty much anywhere.

When the little lady was tiny I had to get out of the house or I’d have lost whatever sanity I had left after the sleepless nights and the hours spent sitting breastfeeding. It wasn’t until she was born that I fully appreciated how much there is to explore and do in Glasgow.

I was lucky enough to have a full year of maternity leave. I went to loads of museums and wandered around so many beautiful parks and drank an insurmountable amount of tea and ate way too much cake. I’d recommend that anyone does the same, because it’s not long before your tiny tot wants to experience it all too, and when they do you don’t quite get the chance to appreciate it in the same way!

But anyway, here are my favourite things that I did as a new mum in Glasgow. You could do most of them anywhere, but I have put some Glasgow specifics in there too!

Most of the things I did as a new mum were so that I could meet people: human adults preferably, but really anyone who would listen to me talk about the feeding and pooping and puking and sleeping (or not sleeping) habits of a new squishy baby, and make me feel like I was ‘normal’. And I met loads of people. Mostly new mums (but also a few new dads) and their teeny tinies too.

It was, and still is, the best thing I did as a new mum. If nothing else, it would’ve been a lonely year without them! But they had all gone or were going through the same things as we were, and it was so relieving to talk to other people with babies the same age as mine.

I honestly don’t know how I would’ve gotten through those first months in particular without having my mummy and baby friends to talk to. I met some of them beforehand at a pregnancy yoga class, but most of them I met and started talking to afterwards at various parent and baby classes and groups, in cafes and even in the John Lewis feeding room! The best way to meet people is just to get out and talk to them. The NCT West End Coffee Group was one of our favourite, chilled out groups to go along to, and meet and chat with other parents and their babies. (It’s still around – you should be able to find it on facebook.)

I’m sure there are people who survive perfectly well without all the ‘parent and baby crap’ as one friend once called it (and I’m sure that pre-little-lady I used to call it something similar) , but I would have lost my mind without other people to meet up with and just talk to about whatever stage we happened to be going through. I’m still friends with lots of them and we still do it (albeit not as frequently) with or without our little ladies and lads. And it still makes me feel ‘normal’ every time we do.

Obviously coffee works too. Just do it. It’s only a few months before you won’t want to eat cake (or anything more sugary than a stick of celery) in front of your baby, because they’ll sit open-mouthed, impatiently and loudly grunting at you for their bit, so you might as well enjoy it while you can.

But seriously, when your baby wants some milk, there’s nothing better than sitting in a nice cafe and chilling out. Especially if you have some friends to sit and talk with about how little sleep you’ve had or how vile that most recent explosive poop was. (You might think that those are the most inane conversations ever but when that’s your life, that’s what you talk about. And it doesn’t feel inane at the time!) There were so many times that I felt dreadful, and sitting down for a cuppa made me feel human again.

Glasgow has an unfathomable number of cafes, and I’ve not found many that aren’t baby friendly (by that I mean that they don’t have baby change facilities). I am currently writing a little list of some of our favourite pram friendly cafes and multi-baby friendly places that I’ve been to. It’ll be up shortly.

I didn’t get out of the house for about a month when the little lady was first born, apart from a trip back to maternity assessment (c-section issues). But once I was able to walk down the stairs from our flat I used to be out the entire day with the little lady in her pram, just wandering around.

I used to walk everywhere; I explored so much of the West End and the city centre and anywhere my feet took me in those first few months – cafes, parks, museums, shops… She’d sleep really well in her pram, so it worked perfectly for me. Now that she’s older and wants to walk all the time I don’t get the chance to just wander very much. I do miss that a little bit.

Having a couple of dogs meant that I had to get out into the park with them. The little lady and I used to get wrapped up (literally, in our boba wrap) in the mornings and walk the dogs. She’d invariably nap and I’d have a lovely walk with my fluffs. 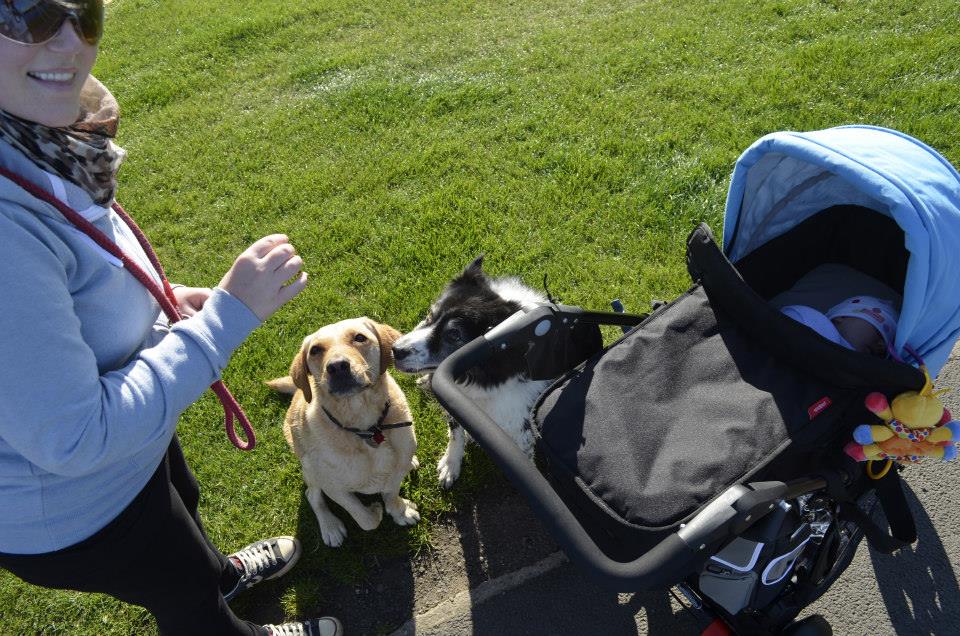 Admittedly there were some days where I wished I could just lie down and nap too. But that’s something I do miss a bit. I don’t get the same exercise from our walks in the park now that I’m also walking a 2 year old with the dogs!

Some of my favourite places for wandering are Kelvingrove Art Gallery and around Byres Rd (and into Waitrose where the only thing I ever bought is their sweet potato falafel – so tasty), into town down to Glasgow Green, sometimes via the shops and sometimes along by the Clyde. I used to do a bit of shopping in Finniestion and grab a cuppa somewhere there too. Our favourite (reasonably nearby) parks for wandering in are Kelvingrove Park, along the Kelvin Walkway, the Botanics, Glasgow Green, Pollock Park and Victoria Park.

I went to bunch of different parent and baby classes and groups when the little lady was tiny. I met so many lovely mummies and daddies at these groups and am still in touch with lots of them. (Don’t worry, I won’t gush about how important all these people are to me.)

We went to some really relaxing classes like baby massage and baby yoga; some more energetic classes like the Post-Natal Exercise Class, Buggy Buddies or BuggyFit; classes for the little lady like Baby Sensory and Tiny Talk and Turtle Tots; free groups like Bounce & Rhyme; and groups like breastfeeding support where I invariably learned something helpful every week.

There are loads of options for classes and groups in Glasgow; we are really spoiled. If you’re wondering what to go along to, just choose something that you like the sound of. It doesn’t really matter much to your baby at first what you take them to so do something you think you’ll enjoy. I’ve written about lots of the things we did when the little lady was tiny on the website, so have a look around if you’re looking for ideas – particularly at the ‘infant’ category.

Go to the cinema

Yes, you can take your baby to the cinema. So if you like going to the cinema, don’t chuck out your unlimited card yet. I’d advise going to an early screening as they will probably be less busy but apart from that just go for it!

I love the cinema. I only went a very small handful of times to baby cinema and I really wish I’d gone more frequently. Make the most of it in those first few months. Go and see whatever movie takes your fancy because once they start moving around you won’t be able to anymore. Well you could, but you’d spend the entire time chasing them around a darkened room; not the best fun, and you don’t really get the full cinematic effect when you miss half of the movie.

Not only can you take your baby to the cinema, but there are also specific movie screenings for parents and babies. The Grosvenor on Ashton Lane have regular parent and baby screenings, as do a few of the bigger chain cinemas. Check your local movie theatre for listings.

And take your other half with you if you can. Because once your baby is around 10-11 months a cinema trip will require a babysitter and far more organisation!