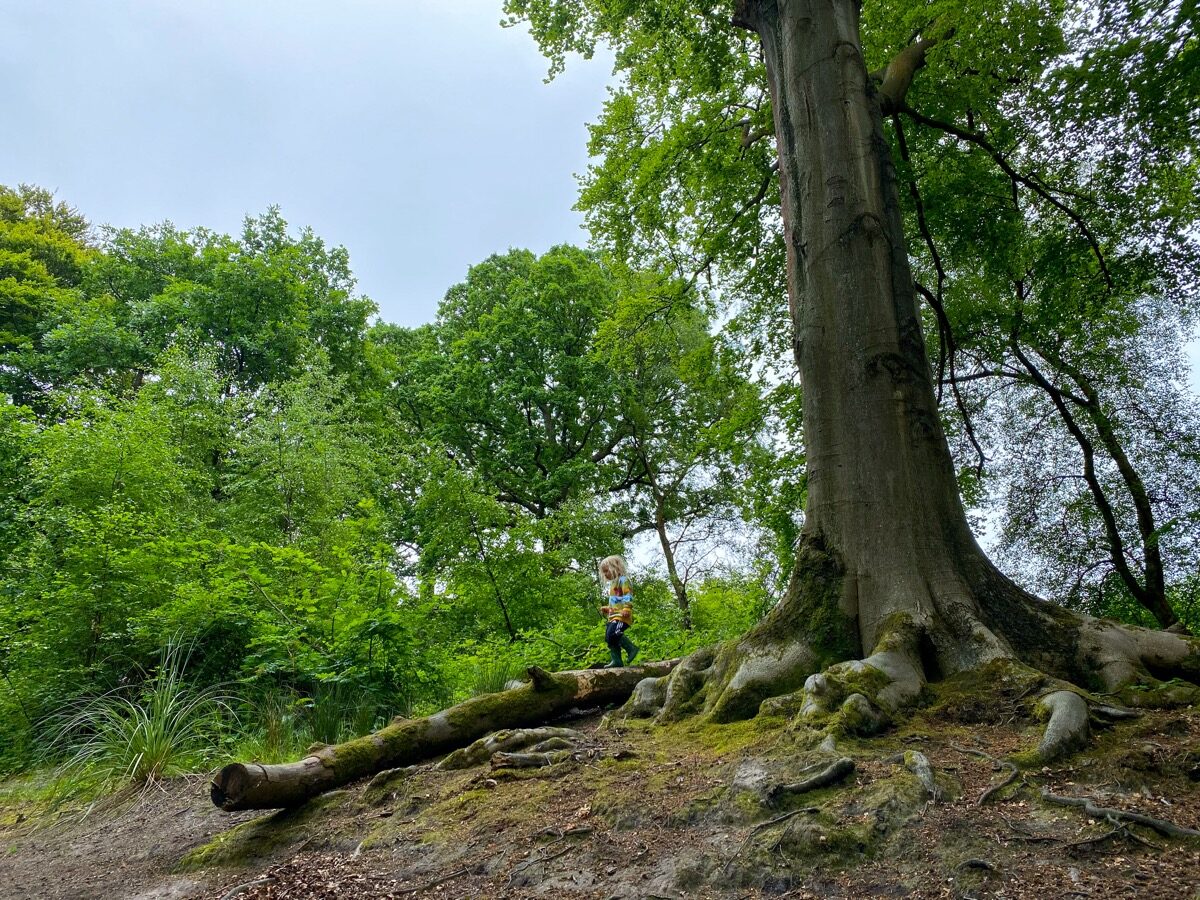 For the past 14 years I have had a wee dog walking business in Glasgow, and when I used to walk the dogs myself (my mum walks them now) Dawsholm Park is where I spent most of my days. We’ve enjoyed it a few times recently, because it’s a park not far away from home and it has lots of big trees providing some shade from the sun or shelter from the rain.

I’ve always thought it felt like a forgotten wild place; it’s very much more a nature park than anything else. The only people I ever saw there were other dog walkers. I rarely used to see any families out walks there, which is quite different during lockdown now that people have been out exploring their local areas.

If you enter Dawsholm Park via the entrance next to the recycling centre you’ll come across a big open meadow with a path leading round and through to the woods. The kids (much like the dogs) love running through the long grass here. And exploring in the trees off to the side.

If you follow that path round you’ll come to a gate in a wall and the woods beyond. Straight along that wide path through the wood will take you to the entrance at the other side. If you head up the hill along any of the paths on your left, you’ll eventually find a big field.

This is where the council’s highland cattle herd live when they’re not at Pollok Park. Head down the hill on any of the paths on your right and you’ll eventually get to the river Kelvin. (The Kelvin walkway is along the other side of the river).

Some of the trees in here are huge. The kids love going off-path and clambering up the hills or climbing along the fallen logs. There’s a pond at the bottom of a wee gully where we found a duck family a while back. If you walk alongside the river you’ll eventually come to a little beach by a bridge where, if you have some wellies you can have a wee splash.

There are so many walks in here and so much for kids (or dogs or adults) to explore. If you walk alongside the river you can even walk right along to the vet school. Cross the river at the bridge at the vet school and you can do a loop, heading back along the Kelvin Walkway, back to the bridge and up the hill towards the recycling centre.

It’s a much bigger and much more beautiful park than you think it’s going to be when you walk in that entrance beside the dump! Until recently it hadn’t been touched in years. However some more recent developments have made big improvements in the paths and walks around the park, including access to the little stony beach area.

You will still need wellies though if it’s been wet; a lot of the paths can get really muddy and very puddly. Excellent for any little puddle jumpers out there.

Wheels: The wheel friendliness of Dawsholm very much depends on which part you go to. The paths through the woods are mostly muddy tracks so are definitely better if you have a buggy with tyres. The bottom half near the river has some big stairs on the paths, though these can be avoided.

Dawsholm is situated on the outskirts of the West End after Anniesland Cross, just before Bearsden. There are a few entrances to Dawsholm Park. The best places for parking are by the entrance next to Dawsholm Recycling Centre on Dalsholm Rd. You can also park down the very end of that road (it’s a dead end) leading on a path down to the river. And you can park round the other side of Dawsholm just off Bearsden Rd.

If you are near the Kelvin Walkway you can get to Dawsholm easily by cycling or walking along there as they link up really nicely together.

The nearest train station is Kelvindale Train Station. NOTE: this is not Kelvindale underground station. It’s a 5 minute walk to the nearest entrance from there. (This is an entrance just before you arrive at the recycling centre.)

We have just started coming back to Dawsholm Park in the past weeks as lockdown has eased a bit, and we all absolutely love this park. It has open meadow spaces, massive trees, a bit of river to splash in and lots of little hidden bits to explore. It’s such an underrated park and the kids really feel like they’re on an adventure here. Great fun!

Dawsholm is situated just past Anniesland Cross on the road out to Bearsden. According to google maps the postcode is G20 0TF.