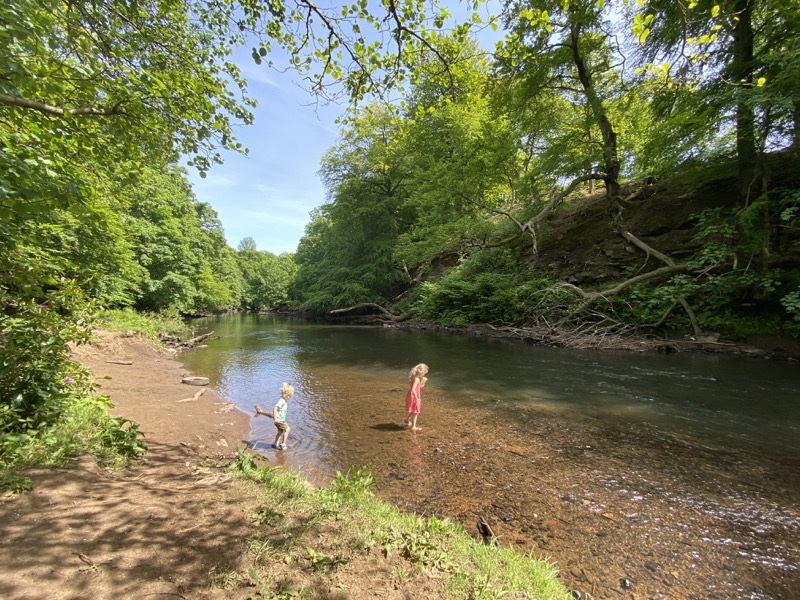 The Kelvin Walkway is a beautiful walk, stretching 10 miles along the banks of the River Kelvin from Kelvinhaugh all the way out to Milngavie. It’s pretty much in the middle of Glasgow but it’s one of those places where you really don’t feel like you’re in the middle of a big city.

It has big trees, wee stony beachy bits you can get to and have a wee splash or throw some sticks in the river and loads of space for running around.

The kids love all the bridges, tunnels, hills, finding wee waterfalls & splashing when we can get to the water at the wee beachy bits.

In non-COVID times you can also have a play in Riverside or Kelvingrove Museums as the walkway runs between the two.

Places you can get down to the water along the Kelvin Walkway are in the botanic gardens arboretum, and there’s a nice wee beach further along the other end just before you get to the West of Scotland Science Park. We call this one our wee “secret beach” because there’s hardly ever anyone else there. It’s right along near the West of Scotland Science Park.

It’s a 10 mile walkway in total, with very few roads to cross so it’s perfect for cycling/scooting along with kids, or heading for a walk with the fam. It stretches through a huge section of the west end, alongside the River Kelvin, all the way from the Riverside Museum to Kelvingrove Park to the vet school out in Bearsden.

When you get past Dawsholm Park & cross the road over through Maryhill Park, the Kelvin Walkway eventually turns into the Allander Walkway which takes you all the way out to Milngavie, where the West Highland Way starts.

(We’ve never gone that far so I only know what the section out to the vet school in Bearsden is like.)

The Kelvin Walkway is totally free, and when they’re open both the museums are also free!

There are access points all along the walkway, and from all the parks. I made a map in Google Maps which you can find here. You can toggle parts on and off within the map, and just select the section you’d like to do.

Our favourite part to cycle is from Kelvingrove Park, doing the loop around the Botanic Gardens Arboretum & back to Kelvingrove again. We also really like to walk out to the part near Dawsholm where we can get down to our wee secret beach.

If you check the map to see where the path runs & you’ll find there are access points all along it. I’ve even marked points of interest along the route. You’re welcome. 🙂