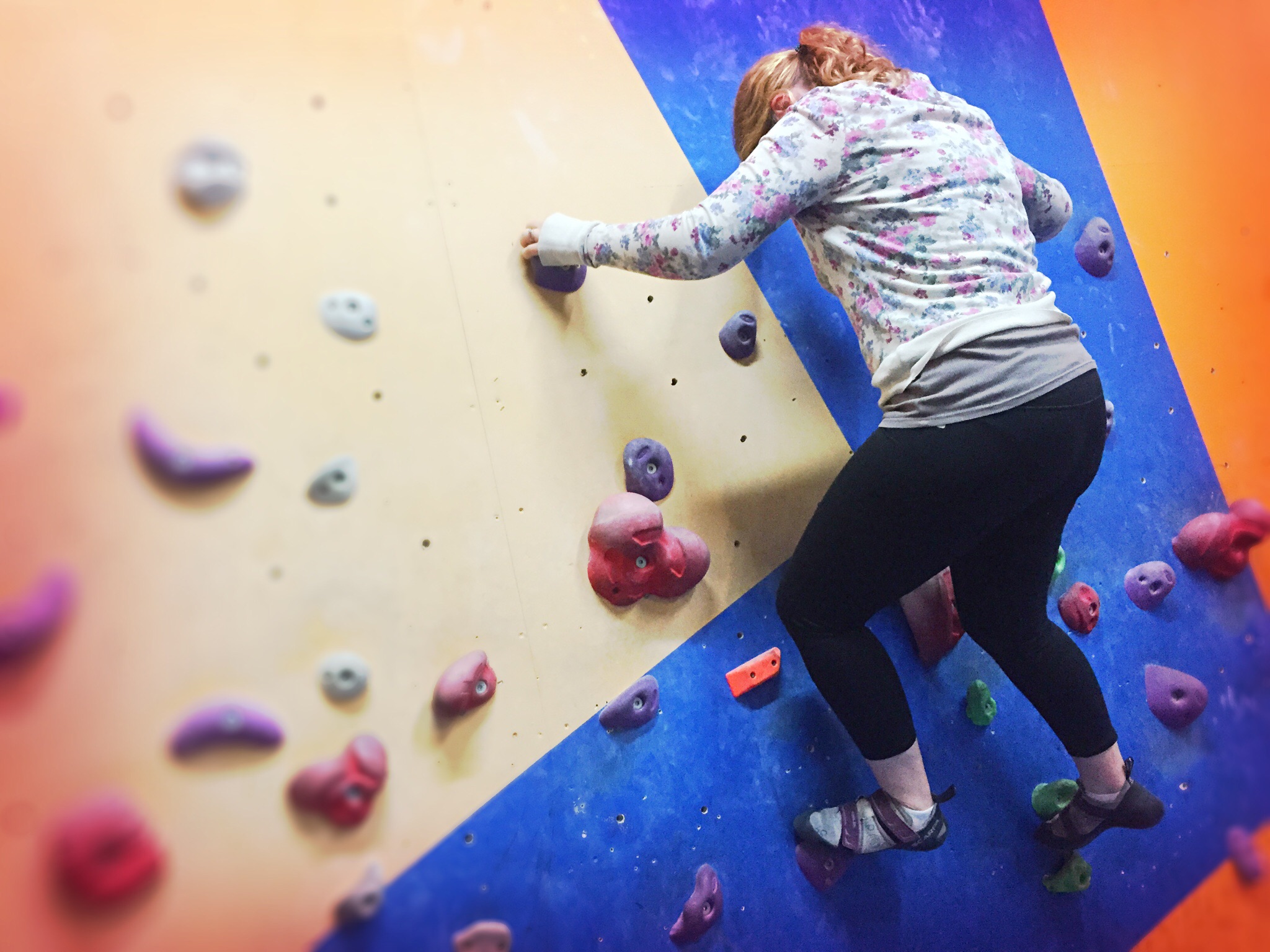 Like pretty much every other toddler on the planet, the little lady absolutely loves to climb. Everything. She’s a maniac. And she clearly has no understanding (not even a tiny inkling) of what it might feel like to fall off that fence or that table or that window ledge. I should probably stop her from climbing everything, but she enjoys it. (I must say at this point that I don’t let her climb on tables – I draw the line somewhere before that – but she does it anyway whilst I’m not watching and then yells “Mummy help!” until I rescue her.)

I quite like climbing too, on actual climbing walls. I’ve never been good at it; I don’t think I’ve ever had the best strength : body weight ratio. But it’s fun, and as an added bonus it’s really good for your upper body!

I rang around the climbing places in Glasgow to see if anyone allows young children in, and although they all have a minimum age limit of 3 to do some climbing, I came across the Tiny Academy at The Climbing Academy in Kinning Park; a group for babies and toddlers aged 0-4 and their parents.

The group takes place within a huge bouldering hall in The Climbing Academy. A section is cordoned off to prevent escapees getting into the general climbing area with folk who might not be watching out for a tiny person. Obviously the little lady made an escape attempt at one point (I wouldn’t expect anything less of her) and found herself utterly hilarious, but all the parents there are pretty vigilant and one of them noticed before I did (oops). 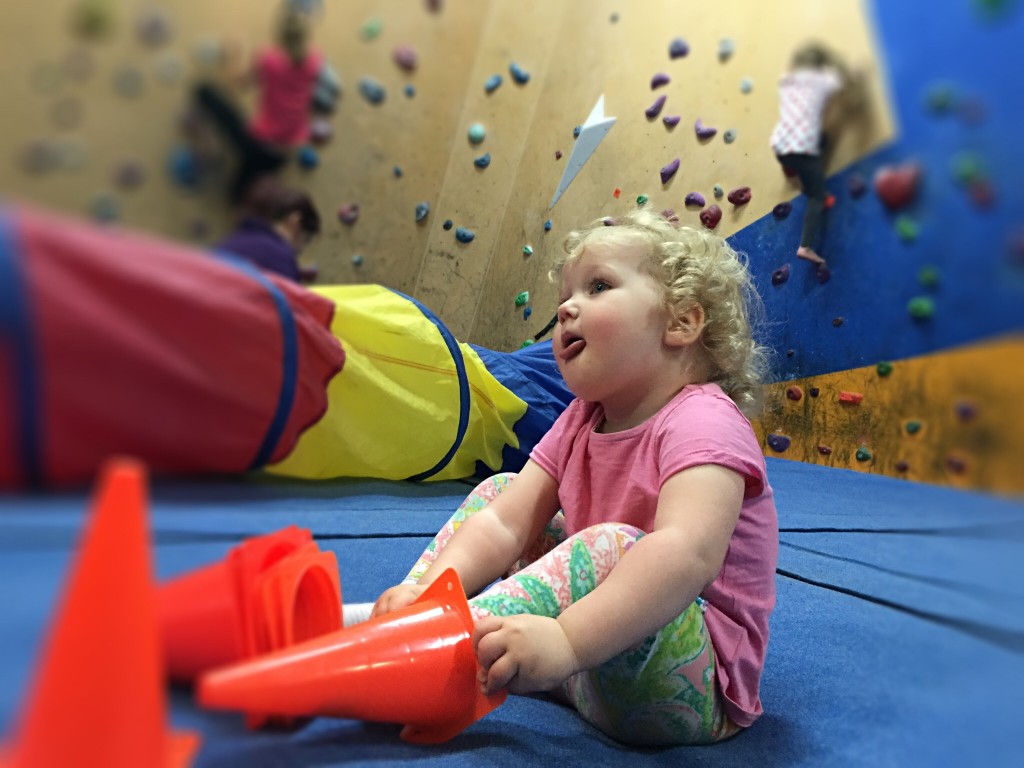 There are toys and books and a few soft blocks out for the kids to play with. And some small orange cones which totally fascinated the little lady. The flooring is made entirely of crash mats, so running around and falling/jumping onto your bum is quite fun for them too!

It’s really designed so that parents can have a climb whilst the kids play. The only thing you need to watch out for is that you don’t fall and land on a child. Again the other parents there are pretty good at herding them away from anyone who happens to be up on the wall. The kids can obviously have a climb if they want to, and the older ones did. The little lady wasn’t interested, but it was the first time she’d ever seen a climbing wall before so she had no clue what it’s for. I’m sure she’ll decide to have a go one day.

The area that we were in had for the most part, really quite difficult climbs. They were pretty much all negative inclines, so probably not the best for beginners. In saying that, it’s still fun. The friend I was with has never climbed or bouldered before and she enjoyed it. I managed three climbs (and by that I mean three tries) and my arms were killing me the following day. I was told that it’s not always in that same area, so hopefully next time we manage along they’ll have it in a slightly easier spot!

The little lady got a little bit upset when I was on the wall, and my friends little boy was the same when she was on. I’m not sure what upset them, but we each lifted the others little for a hug and when they were up higher they were fine. I don’t know what was going on in their little heads but it’s worth bearing in mind that your toddler might be a bit upset on your first go.

They have a cafe selling sandwiches, teas, coffees etc. Unfortunately I forgot to look at it (I’m on a stupid diet right now so I probably subconsciously didn’t want to see cake, or bread, or anything that tastes nice) so I’ll need to report back next time. They also have a climbing shop should you need to buy anything! 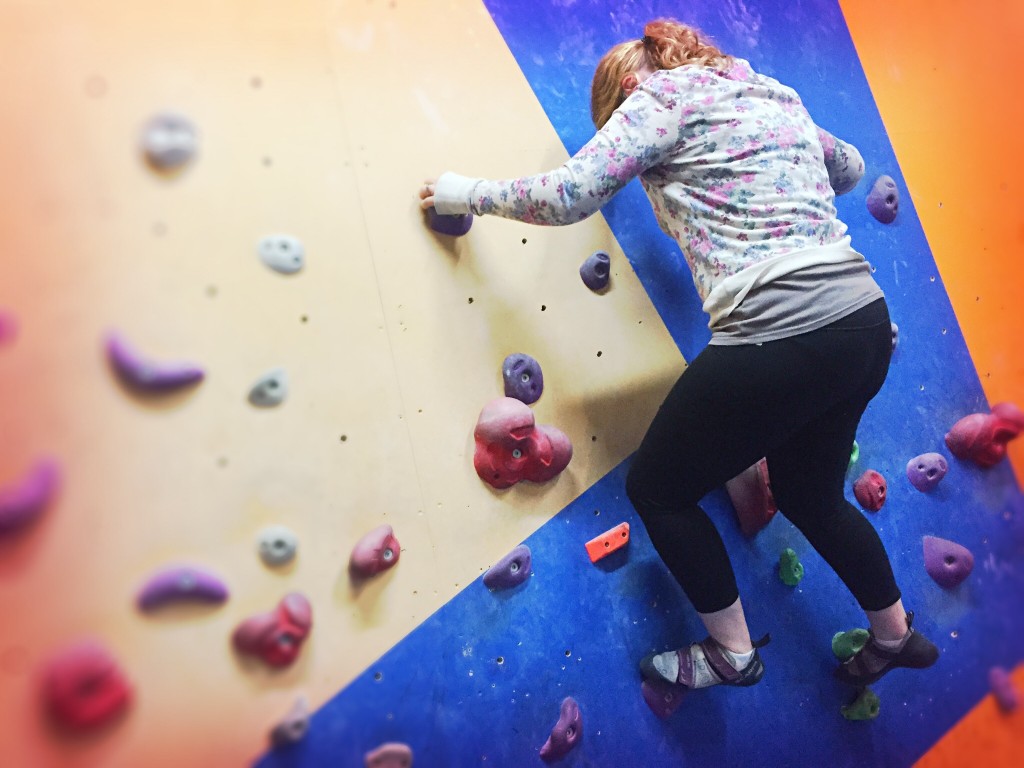 The Tiny Academy is on Tuesdays and Thursdays from 11 am until 12 noon in The Climbing Academy. It’s for babies and toddlers aged 0-4 and their adults. (As I mentioned, it’s more for the adult to do some climbing than the kids, although the kids can absolutely join in).

It is £6 for the session. That’s their standard off-peak entry fee, but you don’t need to pay the joining fee if you’re going to the Tiny Academy group. Shoe hire is included.

How much climbing you get done really depends on your little, but I really enjoyed it. I’ve been thinking about going for a climb for a while but just haven’t gotten round to it, so this is a great way to do a little bit with the toddler in tow. The little lady had a great time too, on the ground, playing with the toys!