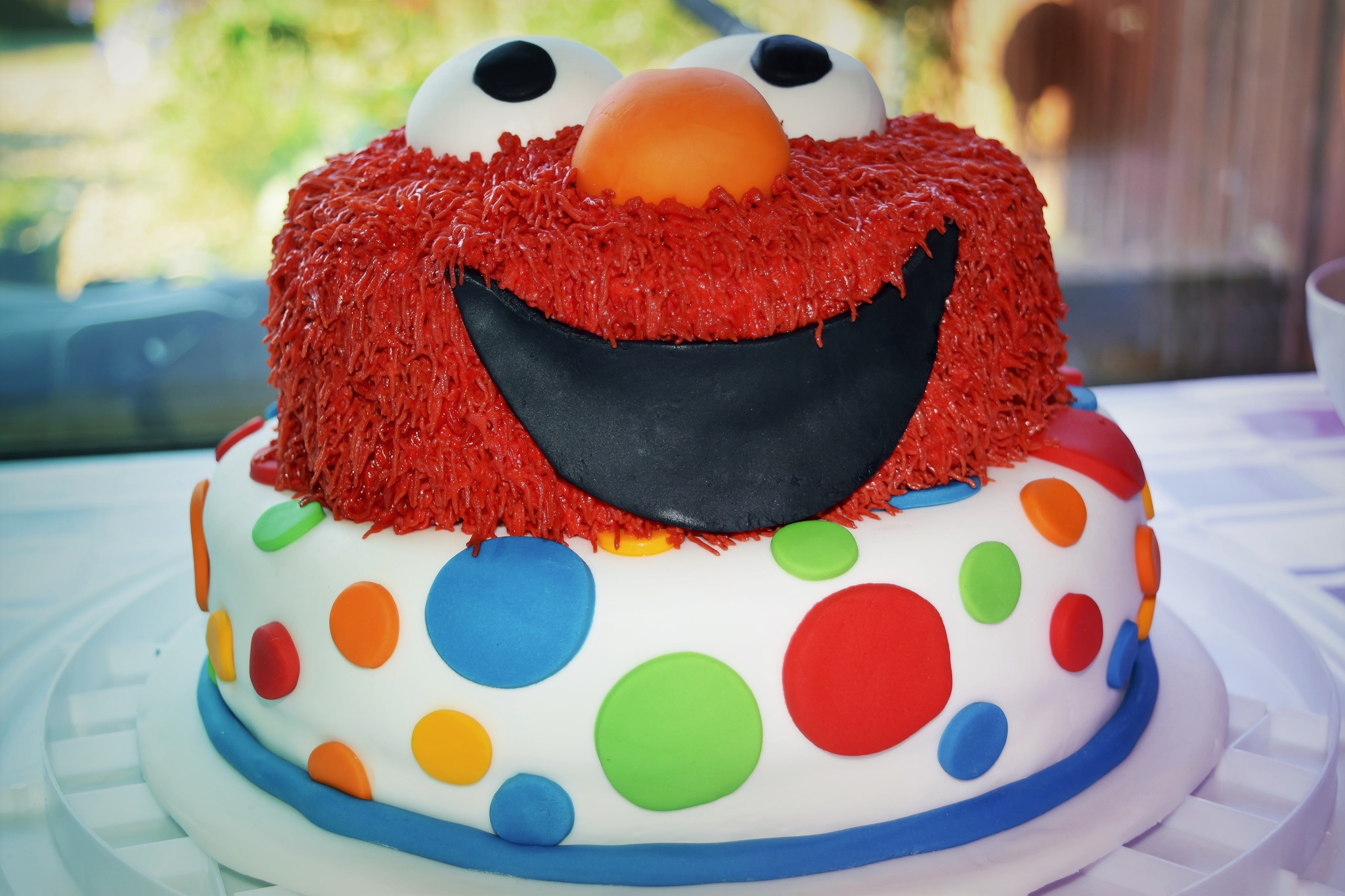 I got a bit crafty this year for the little lady’s birthday and delved back into the world of cake decorating by making her an Elmo birthday cake. I used to dabble in cake decoration now and then for special birthdays and family celebrations, and I always enjoyed it (and found piping buttercream icing quite cathartic).

But I hadn’t done any at all since the little was born (mostly because who the hell has time for cake decorating?) so it was a slightly scary prospect this time. The one thing I knew was that it would take a while. So I started 2 days in advance!

Elmo is her favourite – he has been ever since the first time we let her watch ‘Elmo had 4 ducks’ on youtube a long time ago. (Good song btw, you should totally look it up if you haven’t come across it!) So I did a Pinteresting for some Elmo cake ideas, did a bit of a mash up in my head and came up with this! 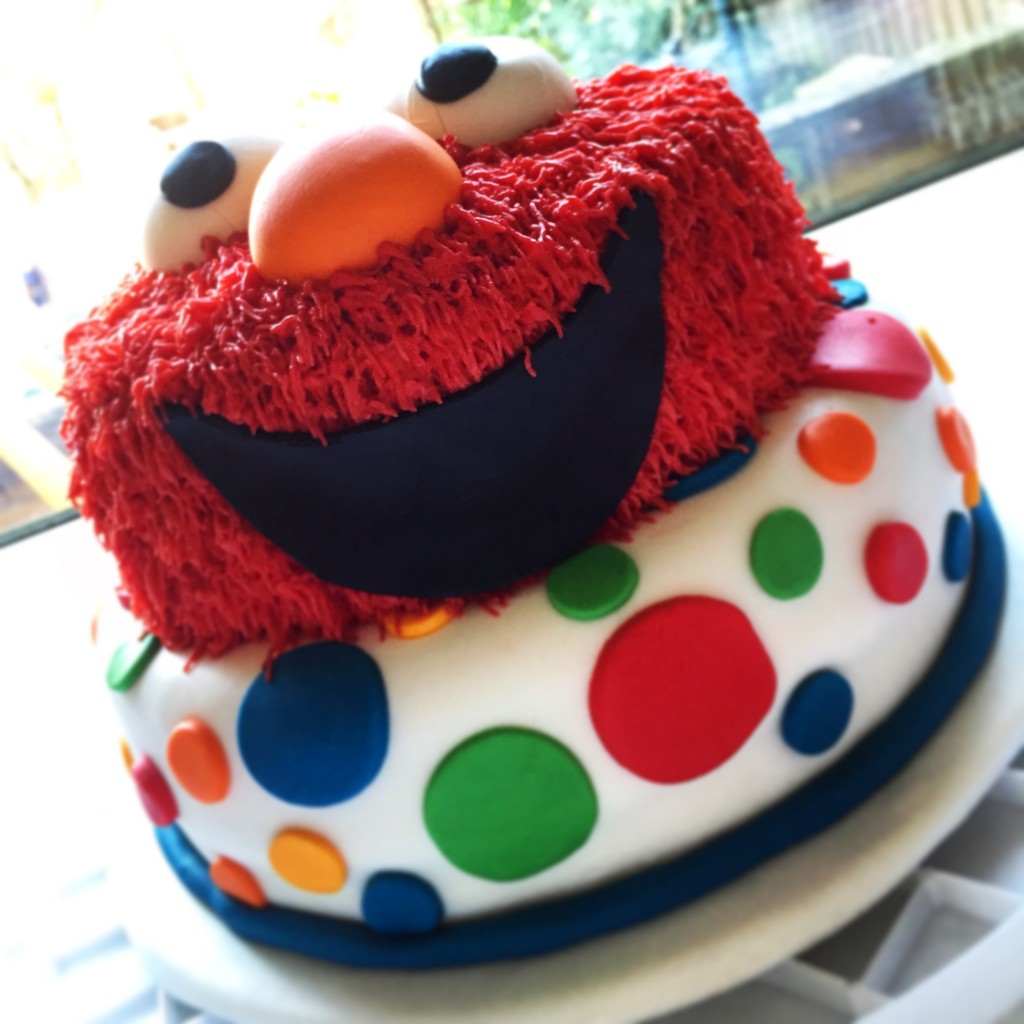 These are 3 main parts you need:

I always find baking the cake to be the most difficult part to get right. I wanted a simple sponge recipe for the cake, so I used this Mary Berry Victoria sponge recipe. The only thing I changed was the cake filling; I still used a spreading of raspberry jam, but instead of a layer of cream on top I filled it with buttercream icing. The buttercream is a bit more solid than cream, and gives the cake more height. Also, it’s yum.

The were quite a few people coming along to the little family party we were having, so I decided to do 2 tiers on the cake. The bottom tier was a 9 inch round, and the top tier was a 7 inch round. I simply doubled the Victoria sponge recipe and divided it up between two 9 inch tins and two 7 inch cake tins.

Now you need your buttercream icing and fondant icing. The buttercream is easy to make (and if your toddler is like mine they will find any possible way to get up to the work surface to get a lick of the spoon/hand in the cake). I like this buttercream recipe. It’s easy and it tastes good. You can add a teaspoon or 2 of vanilla essence instead of the milk if you want – I like the taste better with a bit of vanilla in there!

I find fondant icing quite difficult to make, but this is the recipe I used from Deliaonline.com and it worked well. You can also buy fondant icing pre-made in most cake shops. This is my plan for future because it’s a real pain in the bum to get exactly right.

To cover the cake, basically you cover the cake first with a layer of buttercream icing and then cover it with the fondant. I watched a few videos before my first time covering a cake. This is one of the best ones I’ve found – it shows you, step by step, how to cover a cake with fondant icing.

Some tips I’d give before you try to put the fondant icing on the cake are:

I covered the bottom round with white fondant icing and then separated the spare fondant into a few different balls. Each of these were dyed different colours with a bit of food colouring, then they were rolled out and some small and large circles cut out. I didn’t have a proper circle cookie cutter so I just used a couple of bottle lids! These were stuck to the cake using a little bit of water; I mean a tiny bit – just brush a little drip of water onto one side of the the circles. It’ll stick. Promise!

The best thing about the circle cut outs was that they hid some of my mistakes – I’m not that good at covering cakes! To finish off the bottom tier and make it look a bit neater, I make a gigantic sausage out of some blue fondant and wrapped it round the base of the cake. Et voila!

The top round of the cake was going to be Elmo’s face. Firstly I covered it with a bit of leftover fondant icing which I dyed red. Then came the fun part: piping. It took far less time than I expected actually.

I found a ‘grass’ piping nozzle which I figured would look quite like Elmo’s fur when red buttercream icing was piped on. I tried to make some bits of his fur short and some long, and to have it going in various directions to make it reasonably realistic looking.

I’m not an experienced icing piper and expected it to take ages. But to pipe the whole thing it took about 45 minutes, even with a toddler in one arm trying to stick her finger in it for half the time.

My main tip for piping is not to put too much buttercream in the piping bag. If it’s in your hands too long it gets warmer and runnier than you want it to be. I also kept the buttercream I wasn’t using in the fridge until I was ready to put the next scoop in the piping bag just to make sure it didn’t go all melty!

Elmo’s eyeballs and nose are just balls of fondant icing (coloured orange for the nose) which were placed on there during piping, with a little black circle stuck on with water for each of the pupils. The piped on buttercream icing makes the eyes and nose stick in place.

The mouth was just cut by hand, and again it was just stuck straight onto the buttercream icing. To finish it off, I piped a few bits of ‘fur’ around the top of the mouth so it didn’t look as if it had been just plonked on there.

And that’s really it. I was ever so slightly pleased with the finished result. It tasted really good too, even if I do say so myself! 🙂 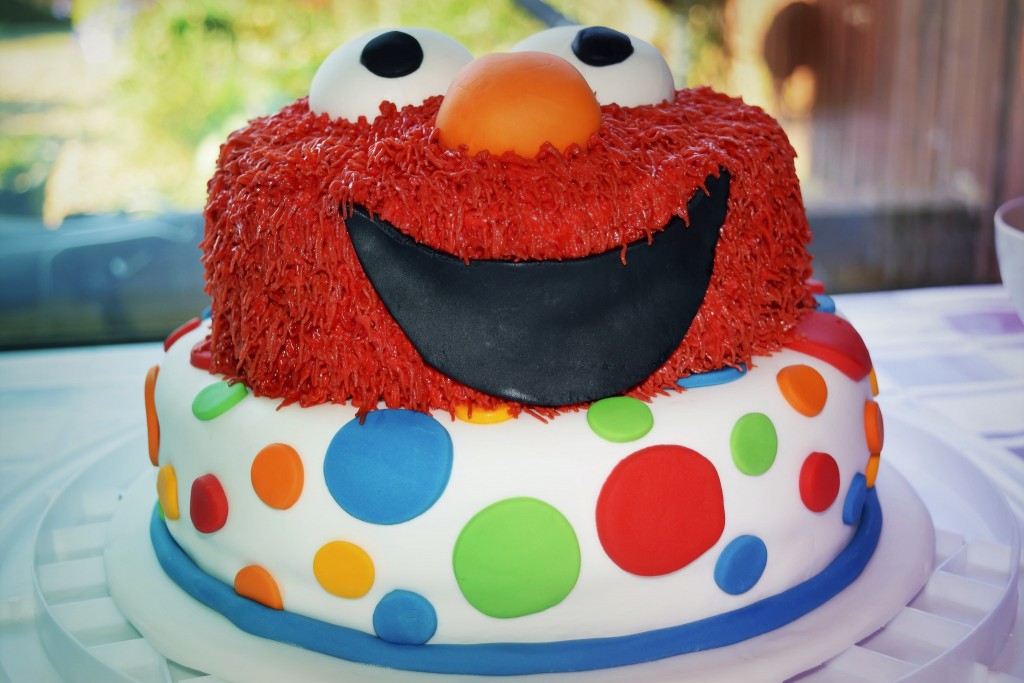