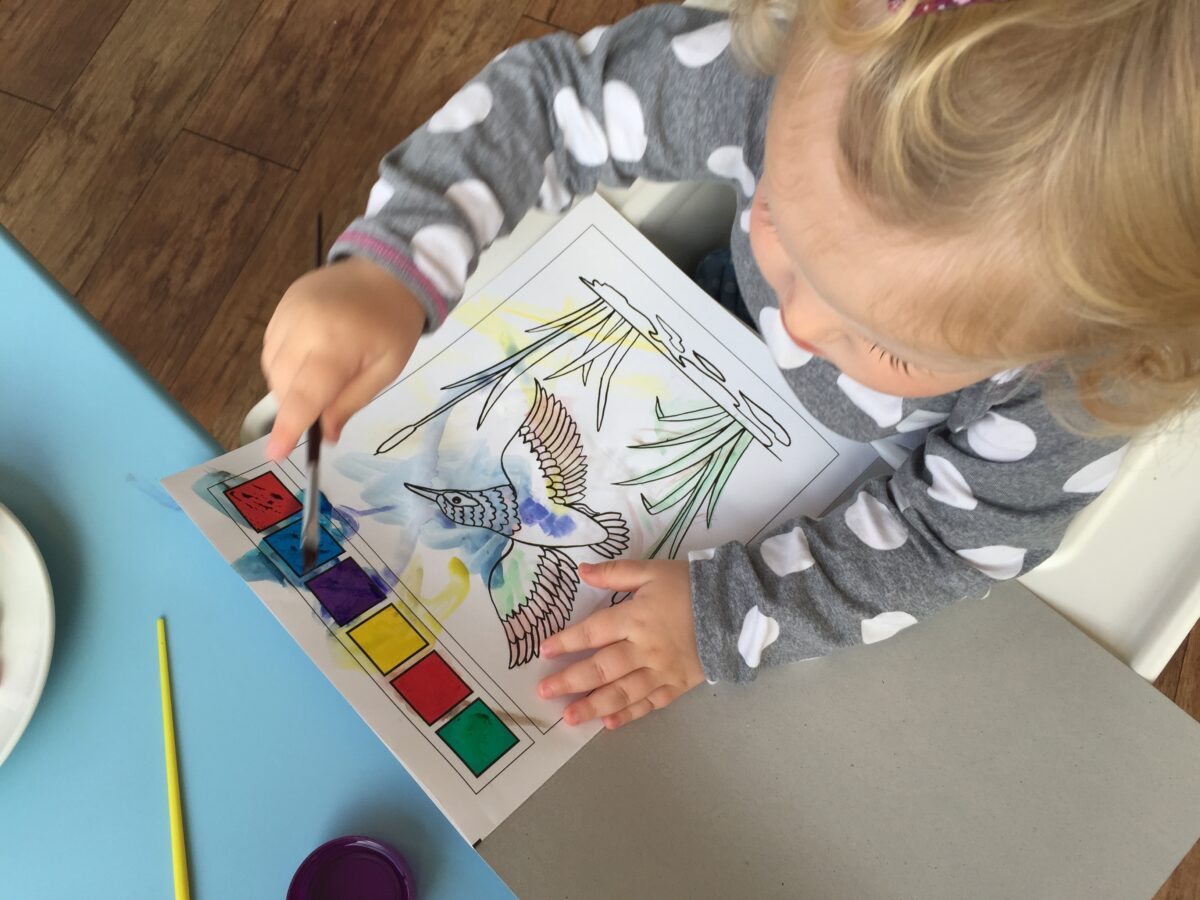 We’ve travelled a couple of times now with the little lady; by plane, train and a couple of reasonably long car trips. As a now 2 and a half year old who always wants to run and jump and explore, it can be quite difficult getting her to sit for any length of time let alone be strapped to a seat. So finding things that will entertain her at a table (that aren’t always a screen or hideously noisy) can be a challenge.

Over the past year or so we’ve managed to accumulate some really great travel toys; some home made and some bought/acquired. They are usually kept separate from the rest of the little lady’s toys so that they are a bit special when we bring them out. But we actually use some of them whenever we eat out in cafes or restaurants, if we’re visiting someone and she has to be on her best behaviour, if she has to sit in a shopping trolley, or if she just makes a request for one of them!

As a bit of a Pinterest fanatic I spent ages before our first trip away finding different things I could make that might entertain her for 10 minutes. We’ve tried and tested quite a few of these creations. Some have stayed the distance. Others were destroyed or rejected almost immediately. Most of them you can make quickly and easily, and if you have a stupid amount of crafty items, stickers and random finger puppets lying around you’ve pretty much got everything you need.

The Bag of Tiny Things

(Free – made out of things we already had)

This began as a little bag of little trinkets when the little lady was a baby. It contained some finger puppets (Ikea do some nice reasonably priced animal finger puppets), small rattles or other noisemakers, things with different textures like wooden curtain rings and a fluffy pom pom, amongst others. 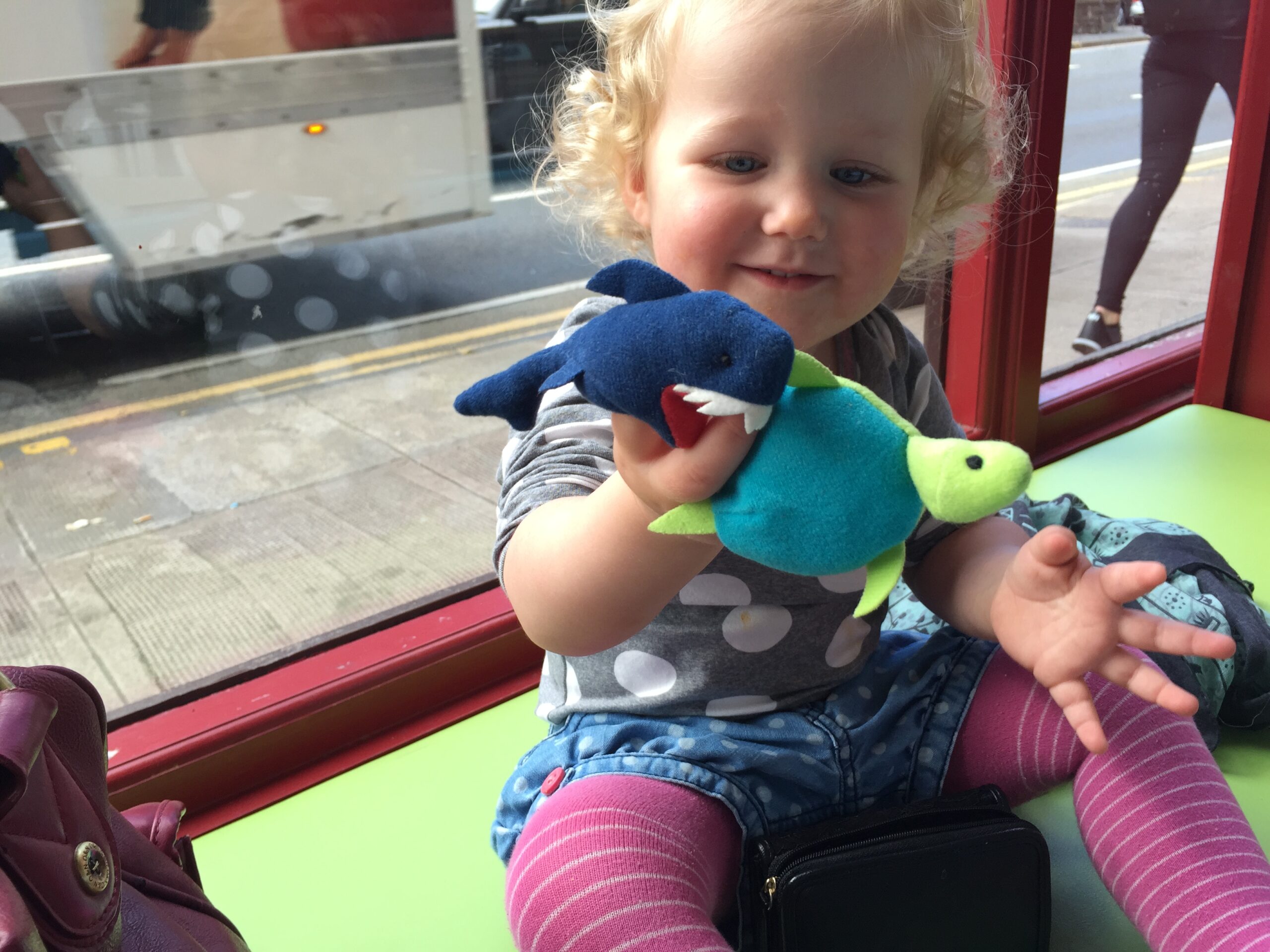 It actually still contains many of the same items, but also has cars, hair bobbles, a wrist sweat band (an old one I used to use for running; washed, obviously), tiny dinosaur/animal figures/puppets, and mini musical instruments like a gazoo or Indian drum.

I switch various things in and out now so that it’s not the same every time. This is the one I usually keep in my handbag so I have it wherever we are!

(Free – made it out of bits and bobs I already had)

This was an idea I got from a friend’s Instagram feed. All it is, is a box with some craft supplies in it, but it has entertained the little lady at so many lunches and dinners and in hotel rooms and even on the train. 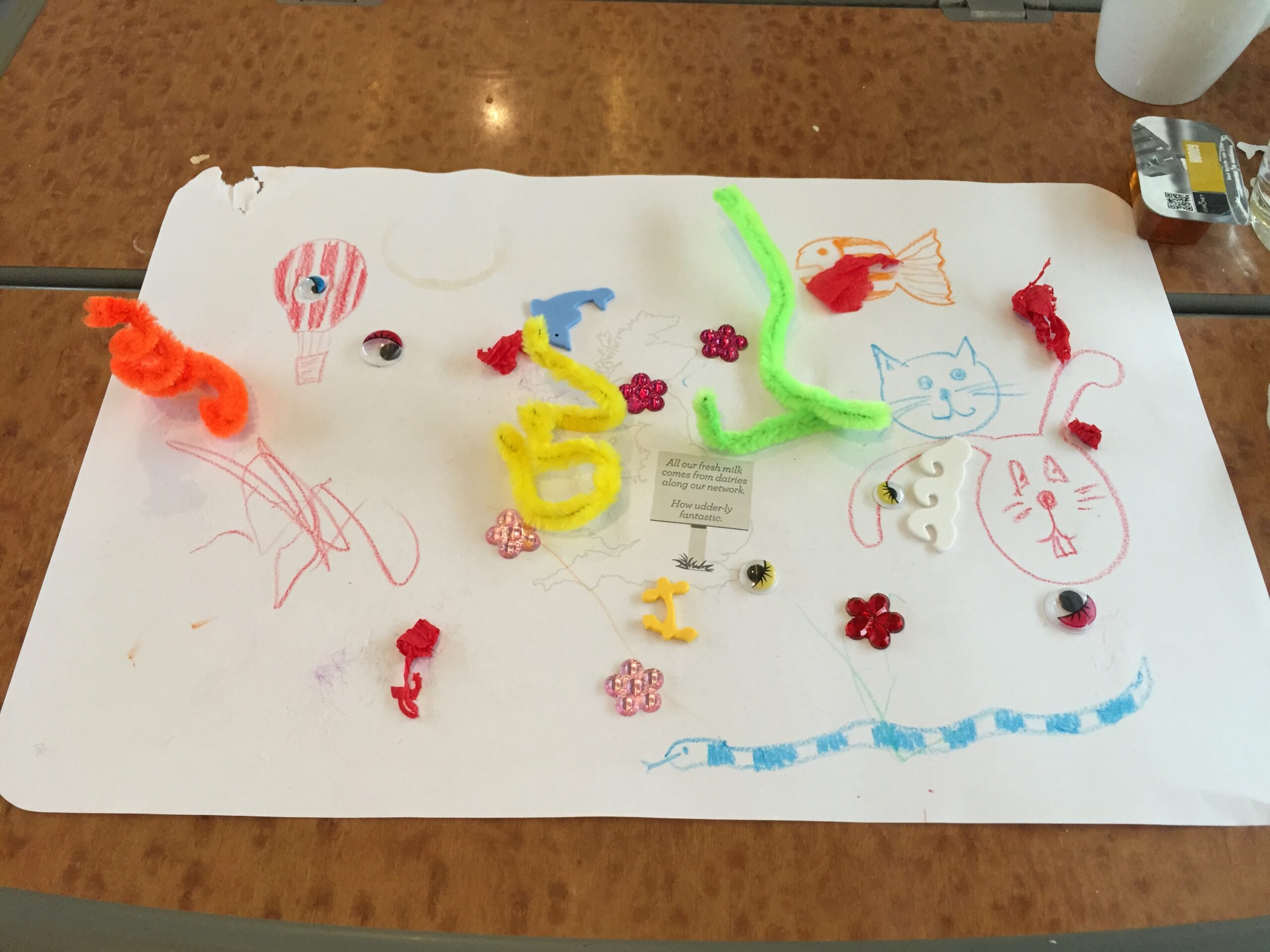 The box is a repurposed box from Ikea that I think once contained curtain hooks, screws and various other bits and bobs. It now contains googley eyes, crayons, foam stickers, glitter stickers, some pom poms, a roll of crepe paper, pipe cleaners, a glue stick, and a few bits of paper. Basically whatever crafty things we have that I can cram in it. It’s amazing what you can fit in a tiny box!

(Free – made it out of things I already had)

An idea I got from one of those web lists – you know the ones that everyone shares and that although most of the time are slightly inane, are actually sometimes quite useful! 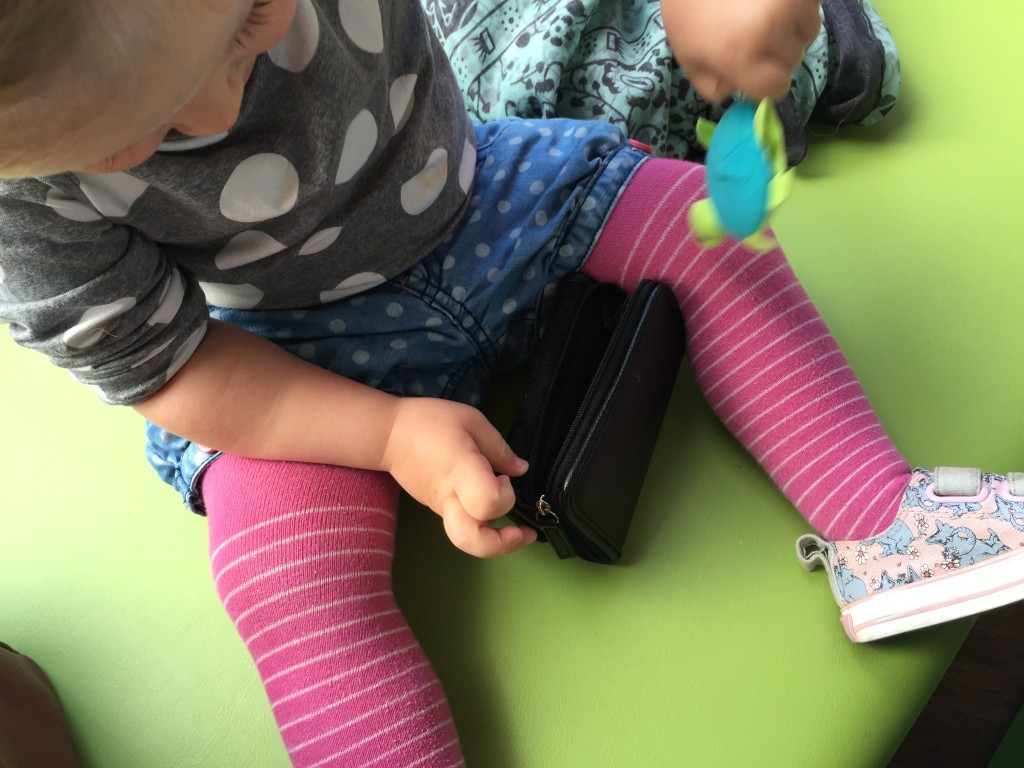 I used an old purse with a zip, magnetic button and various bits for storing cards and cash. In each of the bits I put some stickers, finger puppets, old store cards, photos of family etc. We used to go to a little music class which I wrote about a while ago called First Steps to Music – and we sung a song there that went “Knock knock knock, Who’s in the box? Knock knock knock, Who’s in the box?” She sings this pretty much every time prior to opening it to see which finger puppet is inside the zippy bit!

The little lady adores this toy. Seriously. It’s the best boredom buster ever.

The Little Box of Lego

(Free – made out various bits we have lying around the house)

This is a very new addition to our travel toy arsenal.

The little lady is super into building castles and houses and reeeeaaally tall buses with her duplo. We were going out to a nice restaurant for dinner just a few weeks ago and I needed something that would entertain her for a while. She’d gotten this cute little Frozen tin lunch box as part of a Christmas gift, and when I saw it sitting in front of me I thought – how about I fill it with some lego?! 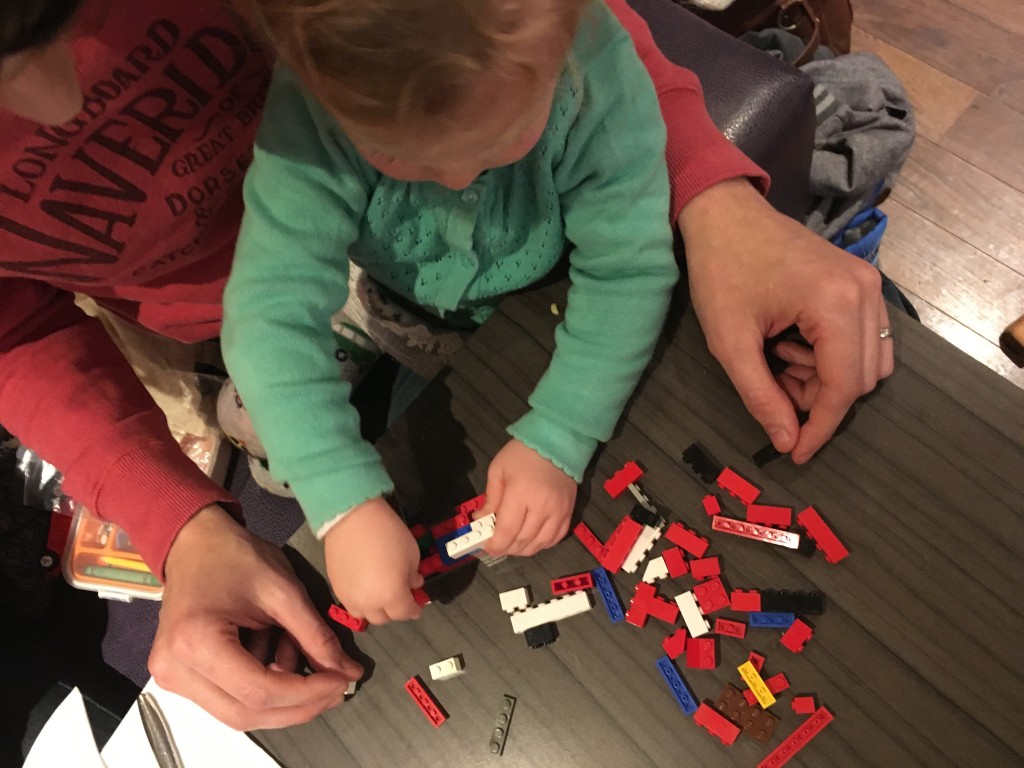 You wouldn’t get much duplo in there because those blocks are pretty big. And they’d be incredibly noisy if she dropped them on the floor. However her daddy is also a lego fan and has a ton of the stuff lying around. So I asked for a few handfuls of his, plus a slightly bigger bit that could be a base for her castles and hey presto, we had a new toy. The little lady was delighted with it, and she lasted a good while building and playing with it.

Most of these are toys we’ve been given as gifts at some point or I’ve picked them up cheaply somewhere thinking “oooh, she’ll like that”. As you do. I don’t think any of them were bought deliberately as ‘travel toys’ but they’ve ended up coming in really handy, many times!

This was something I came across by accident, and I’m absolutely delighted that I did. All it is, is a material balloon cover. You stuff a balloon inside and then blow it up so it becomes a fun ball type toy. It’s such a simple concept though, and both the little lady and I think it is absolutely brilliant.

From the info on the website it seems to have been designed so that young children can play safely with a balloon, giving you peace of mind that they won’t burst, eat and choke on said balloon. That’s a fine idea by itself, but I also think that it makes a fantastic travel toy. It folds up teeny tiny and weighs practically nothing (super important for packing when you’ve got kids). All you need is a balloon to go with it which also weighs practically nothing (and costs very little too). It is a perfect toy for taking away with you. And they’re really pretty to boot!

On those days when we’ve been in the hotel room for a little while, perhaps busy getting ready or packing (or in our case when Daddy has had to do a quick bit of work) it’s been really useful to whip it out and play with the little lady either in the hotel room or down in the hotel lobby. She has had so much fun with ours.

The only (obvious) thing is that you can’t really play with them outside. It is a balloon and you will have a wailing tiny tot if it flies away on a gust of wind. 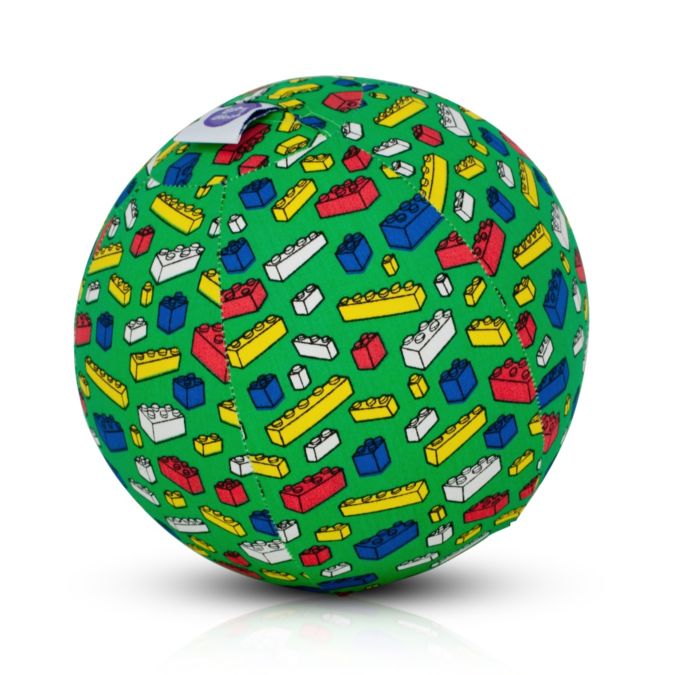 (It has been pointed out to me that a beachball would do a similar job. This is very true.).

I picked this up in the supermarket for about £4 when I saw it was reduced. I didn’t really know what it was but I figured it had pens and the little lady loves drawing, so I went with it. Basically it’s a white board that unfolds with a few pens, a water cleaner and a wipe.

It’s actually not so much the drawing part that she loves. It’s the drawing and then cleaning off and wiping that she really likes. As well as taking all the pens and extra bits out and putting them away again. Those extra bits have made many a meal easier both at home and on holiday.

The only thing with these is that the pens are pretty rubbish. They weren’t too bad to begin with but they’ve never drawn particularly vibrant colours. And within a shorter period of time than I’d expect they had faded to almost invisible. She still uses them as she always has so it doesn’t bother the little lady, but it bothers me.

The blackboard cost £1 from one of the pound shops. It would’ve been the best buy ever had the chalks that came with it not been so crappy that they refused to make marks on the board. If you were feeling crafty you could make your own board with a small bit of wood or strong card and a tin of blackboard spray paint. But for £1 you might as well buy it!

We also have a small whiteboard (actually an orangeboard) that she loves. However the pen can be quite dangerous as it doesn’t come out of furniture particularly well! It’s fine under strict supervision…

We were given a couple of these by an auntie for the little lady’s second birthday. I’d never come across them before, but they are excellent for entertaining both out in restaurants, and on airplanes/trains etc. Anywhere there’s a table (or a floor). 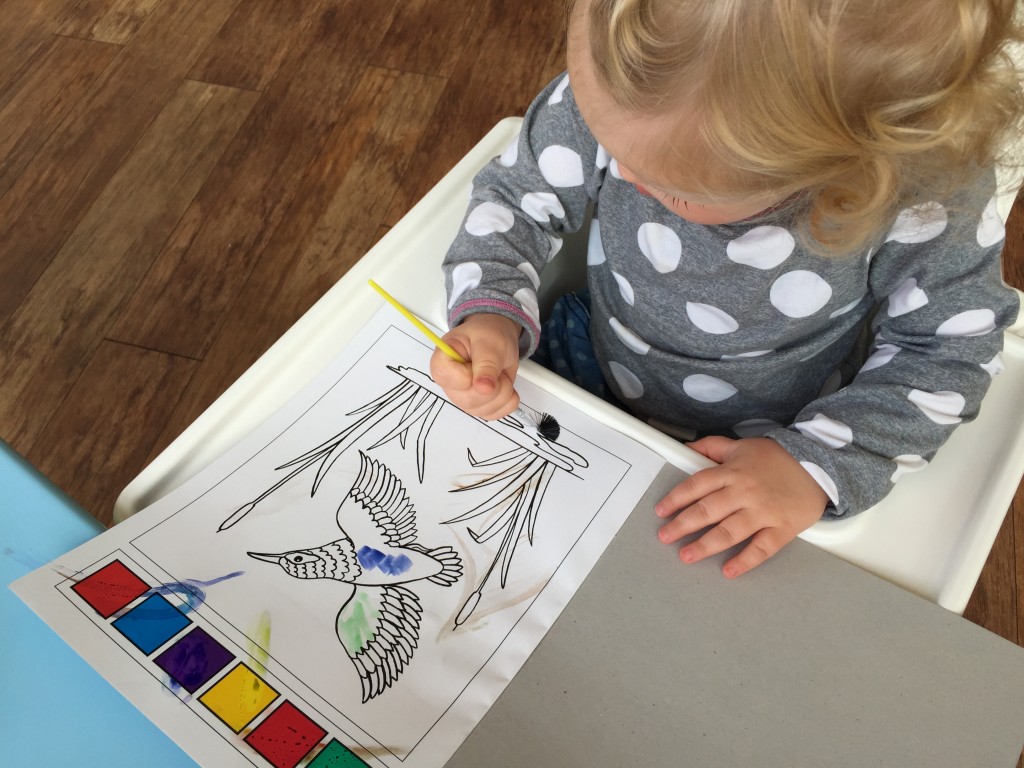 All you need to use magic paint books is a bit of water and a paintbrush. If I know we’re going to use them I usually take along a little paintbrush and an old bottle lid for filling with a bit of water. The screw top Hipp follow on milk lids are perfect. I kept a load of them for using when painting at home and just shove them in the dishwasher after!

The books we were given have 8 pages in them so they lasted us a few meals out and various trips. They keep the little lady occupied for a good while. I’m not sure exactly what it is about these, but she really loves them.

These have always been a favourite toy with the little lady. They stack up really neatly for travelling and are pretty small and lightweight. They make great bath toys as well for when you’re away. Or at home.

The Last Resort: The iPad

(Way too expensive to buy specifically for a kid)

Ok, before anyone starts with the “Wait – what? She bought her 2 year old an iPad?!” I’d like to just say that no. I didn’t. We have an old first generation iPad that a lot of apps don’t even work with anymore. It was going to charity, but we thought we’d keep it and put a few games, some Elmo videos and episodes of Baby Jake on there and use it for times of need. (These times range from long journeys in the car when my singing will no longer suffice. Or on planes and trains when my singing would annoy everyone within a 5 seat range, to that point during a meal in a restaurant when nothing but a screen will stop a complete meltdown.)

The iPad comes out once we’ve gone through all the other options and it has made many trips and meals much easier than they otherwise might have been. If we forget to bring it my phone can also work as an emergency aid – but on guided access mode. If you haven’t ever heard of guided access mode it’s intended so that your child can only access the app you let them. You can set it up on apple devices so that they can’t switch between apps. This means they can’t go deleting everything or facetiming/texting random people. You set it up in settings and once it’s set up you turn it on by triple clicking the home button. It turns off by doing the same thing and entering a passcode – it’s really easy and really useful.