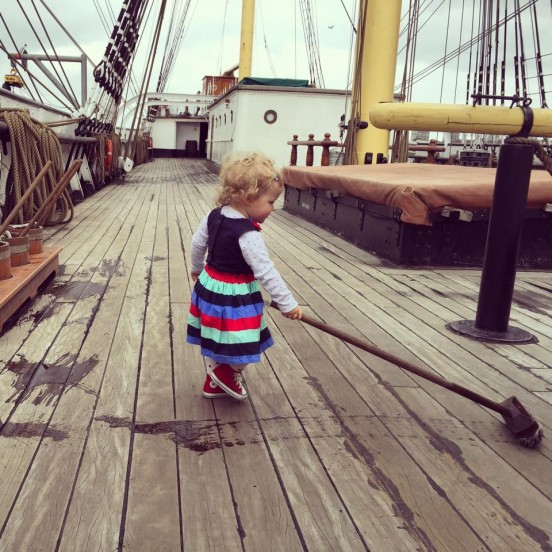 We took a wee trip to The Tall Ship a few days ago. I’d been planning on going for ages, so when we had nothing to do one dry morning I thought we’d check it out. 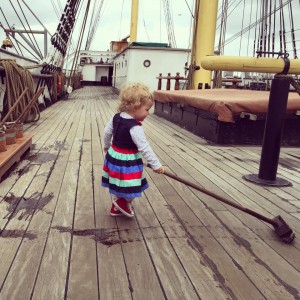 It’s a lot bigger than I thought. Not being much of a seaman (with the exception of a few dinghy sailing lessons years ago) I wasn’t quite aware of how far under the water large boats actually go! There’s at least 3 levels to it (I got slightly lost at one point so there could be 4!) with different exhibits about the workings of a tall ship & how people lived & worked on one in the early 20th century throughout. There is a lift to get to pretty much everywhere (except the upper level of the top deck) so it has good pram access.

There are buttons to press, ropes to pull, videos to watch, bells to toll, stairs to climb, decks to scrub and plenty of space to run around in. My little lady’s favourite things were climbing oh so many stairs, and scrubbing the deck, which she did for about 15 minutes. Thinking about it now, the tall ship is a toddlers dream… 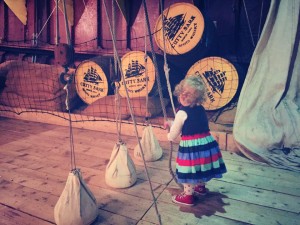 There is a (very) small soft play area for toddlers on the bottom level (sorry, the cargo hold) with a tunnel, some soft blocks & a mini-drawbridge to play on. It could definitely do with a bit of updating, but my little lady was perfectly happy to crawl/run around in it. It would entertain young toddlers for a while, but it’s not for kids older than about 4. There’s also a basket of dress up clothes here which are quite fun.

We only got tea and a scone which cost us £2.50. Good tea, and the scone was nice. They do have a decent selection of hot & cold food, but I can’t comment on how nice it might be! It all smelled nice though. 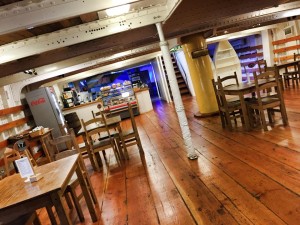 It’s free. They ask on the way in if you’d like to buy a guidebook, but you don’t have to.

As with all of Glasgow’s museums, the Tall Ship doesn’t specifically cater to young children too much, but it does so (I think accidentally) better than a lot of the others. The little soft play area they have needs a bit of a facelift, but since it’s part of the whole experience you’re not going to spend too much time in it anyway.

From a toddler’s perspective, it’s absolutely worth a run around. And with it being right next to the Riverside Museum, you could make almost a whole day of it.

Opening hours are from 10am – 5pm, Monday to Sunday. And the Riverside Museum is right next to it if you’ve got some extra time to fill.

The top deck (with the deck scrubbers) is outdoors, so make sure you have weather appropriate clothing because your little ones will probably like this deck best.

The Tall Ship at Riverside is located at 150 Pointhouse Place, Glasgow, G3 8RS