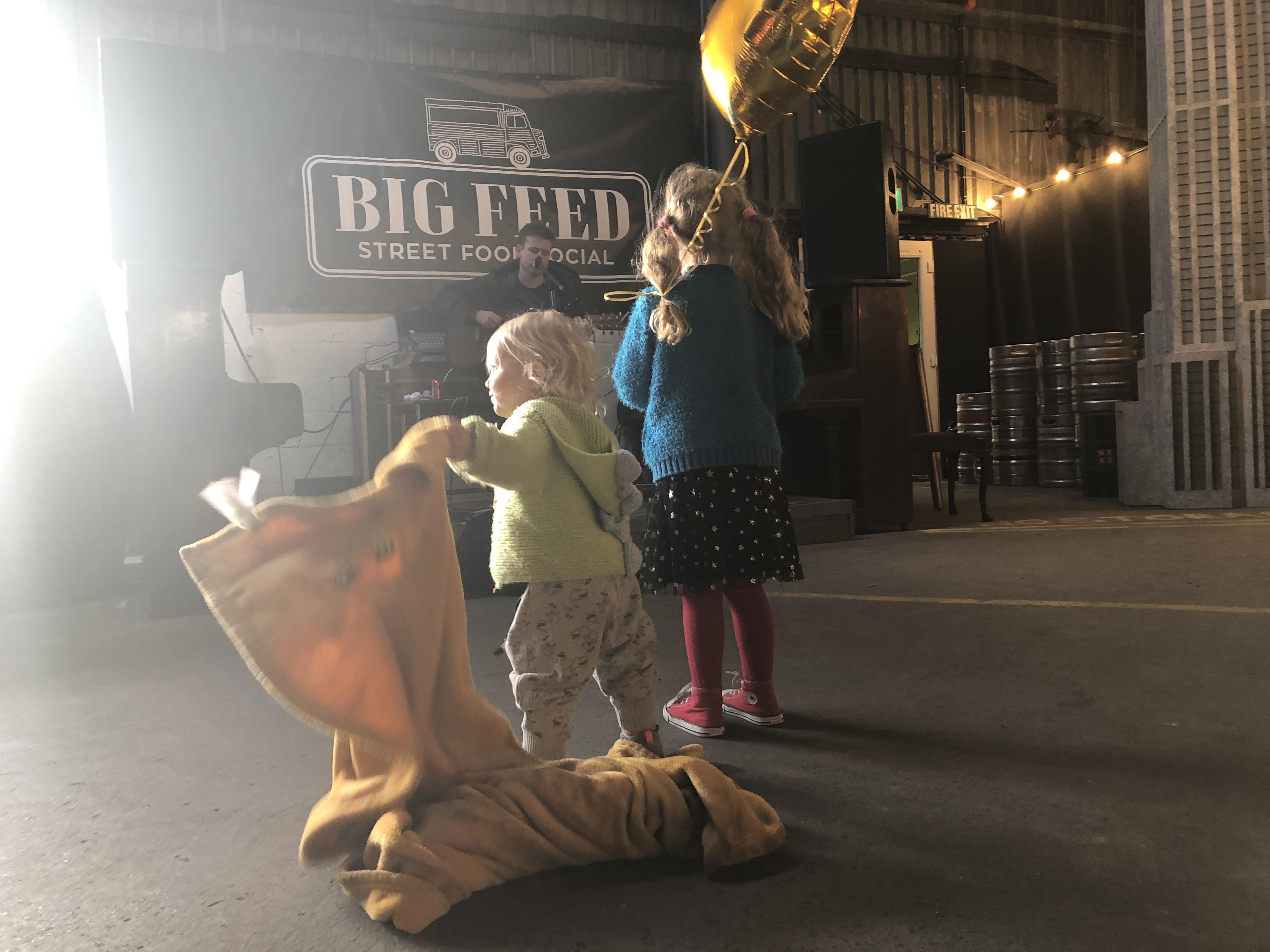 Anyone who’s ever known me will know that eating nice grub is one of my favourite things to do. Especially with family and friends. Unfortunately, baby boy is at that stage where eating out is an absolute nightmare. He hates sitting. Anywhere. Ever. All he wants to do is run and climb and play. ALL the time.

In most eating places that’s not really appropriate and his daddy and I had a discussion recently about curbing our weekend brunching or lunching or basically all eating out. (Probably good for the waistline anyway, right?)

Then we met some of our family at The Big Feed. We’ve been along a couple of times before, normally late on a Sunday when the food is running low and half the carts have shut up shop.

Last weekend we went for lunch and we all had a great time. Including baby boy, who got to run around in this new space and let off some of that steam he needs to release before sitting becomes even remotely appealing.

The Big Feed takes place over a weekend once a fortnight in a big warehouse in Govan. The warehouse is filled with picnic benches, a bit of mood lighting and delicious food & drink carts. One of which is normally prosecco on tap. 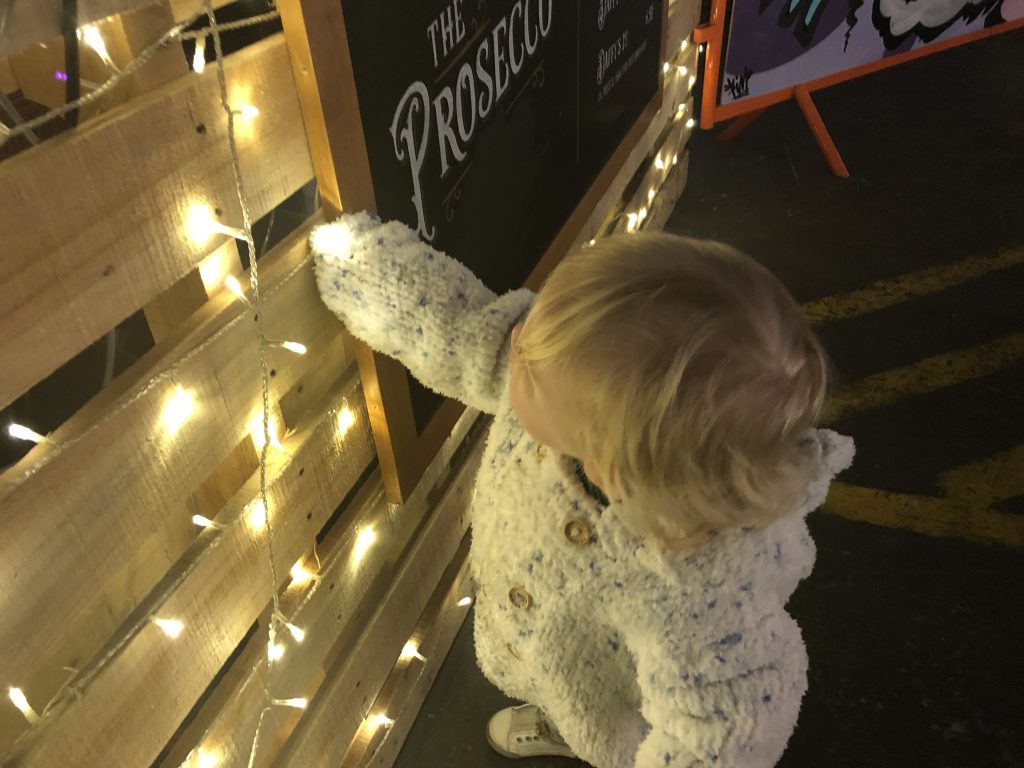 There’s live music throughout the day. There’s plenty of parking in the car park. There’s stuff to entertain the kids. 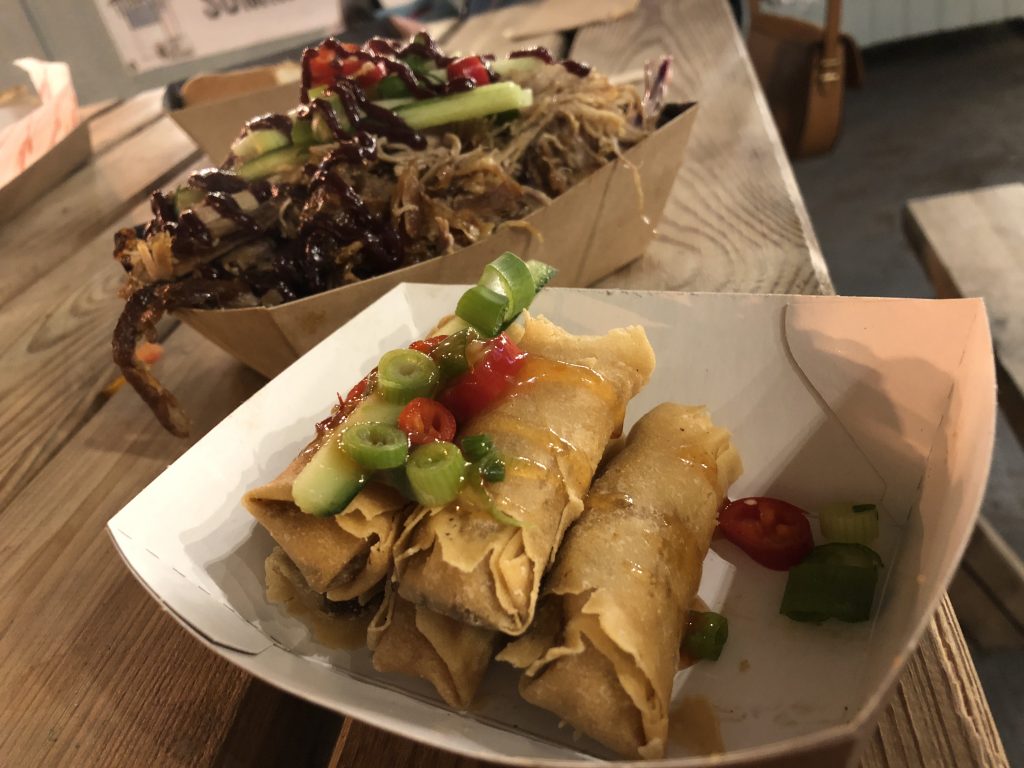 There are normally loads of gluten free and veggie options, plus some vegan options too.

I can honestly say that I liked everything I put in my mouth. If, like baby boy, your kids will give anything a go, they will love eating here. It’s a veritable smorgasbord of deliciousness. His favourite things were the butternut bites from Street Food Putter Club; I barely got a look in once he’d discovered them. He stuffed his face with vegan mac and cheese, pizza, and had a go at everything else in front of him.

If, like the little lady, your kid is fully offended by any form of green/garnish and is going through a phase where she’s utterly offended by food that she isn’t familiar with, there’s usually pizza. (Good woodfired pizza.)

And the first time we went there was a gourmet toastie vendor that she loved too. (I promise she does eat more than bread and cheese based foods at home but when we’re out, we’re out.) 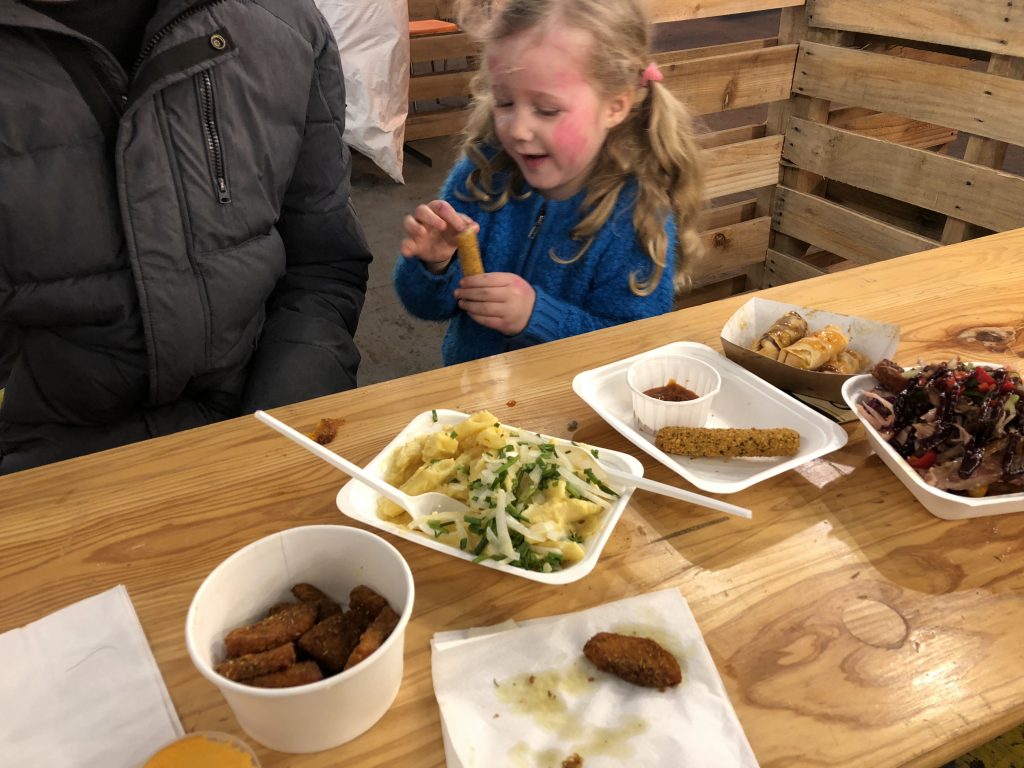 The place is incredibly family friendly and very casual. There were a bunch of families, and a bunch of kids running around playing. There is a lot of space for a toddler to cruise around in, and a lot of background noise for their screeches to get lost in.

The little man could roam around (while one of us followed him to stop him going into a kitchen or out the door). There are board games and retro video games for the bigger ones. And there are a lot of high chairs.

The nice folks from Balloon Twisters were there the past few weekends it’s been on, doing face painting and making animal balloons. The little lady got herself a pinky pie balloon (she’s a big MLP fan) with which she was utterly delighted. 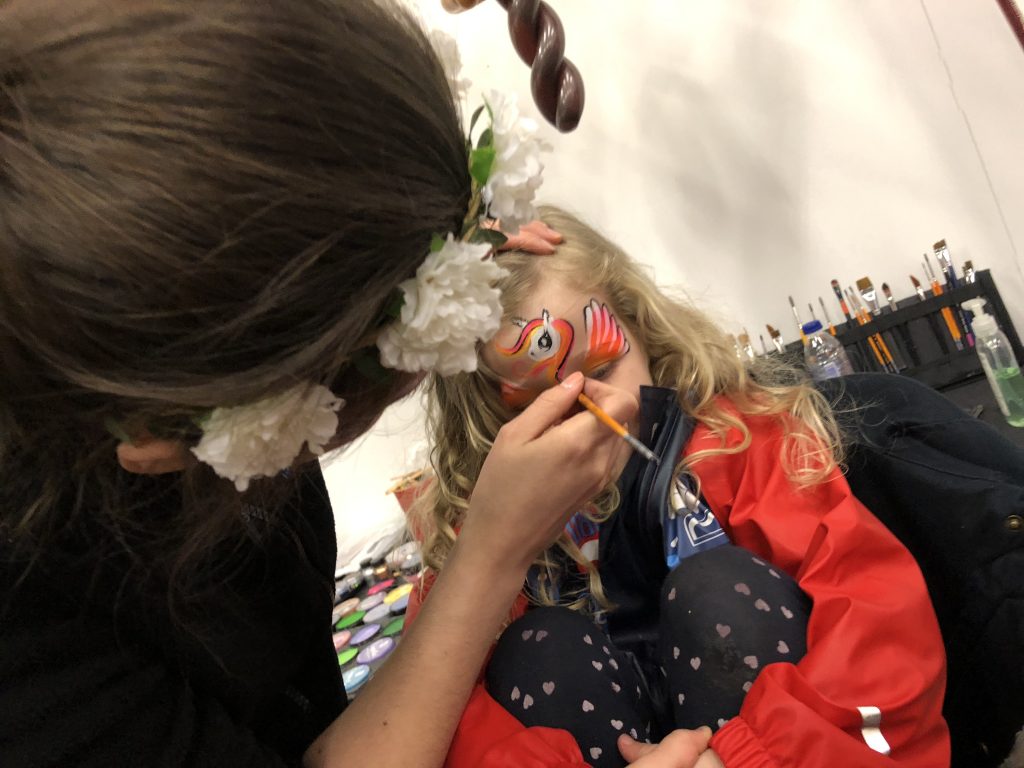 It’s dog friendly too. Which also delighted the little man. He’s a fan. Especially of fluffy ones.

It is £2 per person to get in and under 10’s are free. Food dishes are priced individually. Some dishes are big, some aren’t. A pizza was £6, a big dish of vegan mac & cheese was £5, some of the side dishes were £4. I never felt ripped off with any of the dishes we bought. (And we pretty much tried everything this time!) 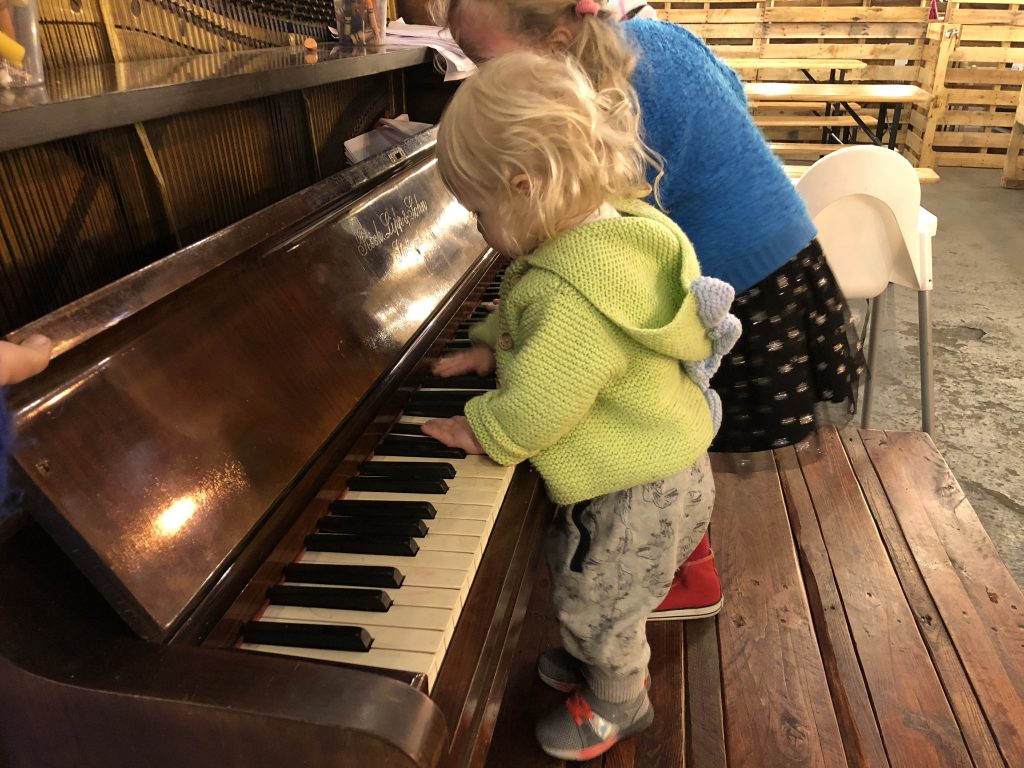 Don’t go too late in the day. Obviously it depends on how busy it’s been during the day, but quite a few times we’ve been along late on Sunday and at least half the food trucks have run out of food and shut up shop.

If it’s cold outside, it will be cold inside the warehouse. Wrap up accordingly!

You do need to allow time to get your food. You’ll need to go to each food truck separately to order so don’t expect to get everything all at once, plus your drinks and then sit down and eat everything while it’s hot. This isn’t like a restaurant. It’s like 14 restaurants, and you need to order at each of them separately. You get some food, sit down and eat it whilst it’s hot and then go fill your boots as many times as you want. So expect your eating to be  intermittent. Especially if it’s busy. 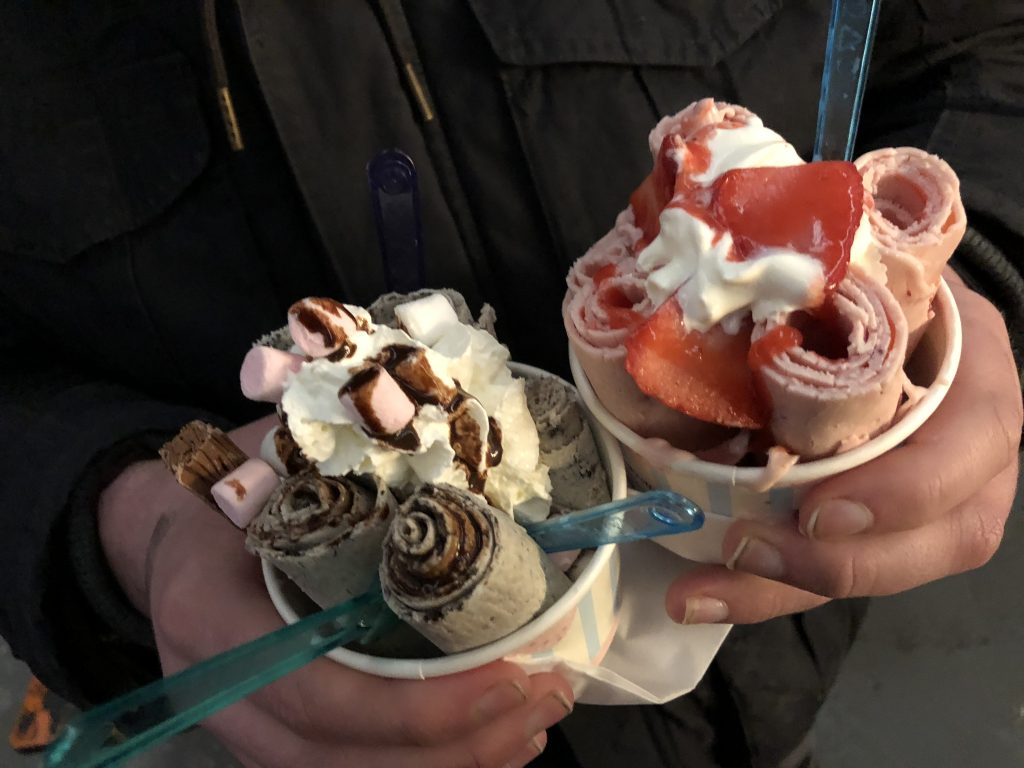 The Big Feed is a brilliant place to eat out is a casual, family friendly setting. There’s lots going, lots of background noise, and it’s no problem if you have a roamer child like we do. The food is also casual, but really yummy.

It’s probably one of the few places we’ll be eating dinner out with the little man for a while. At least until he learns to sit still for longer than 20 seconds before screeching at us, Nazgûl style, until we set him free.

The Big Feed is on every second fortnight. It takes place in a big warehouse at 249 Govan Road, Glasgow. 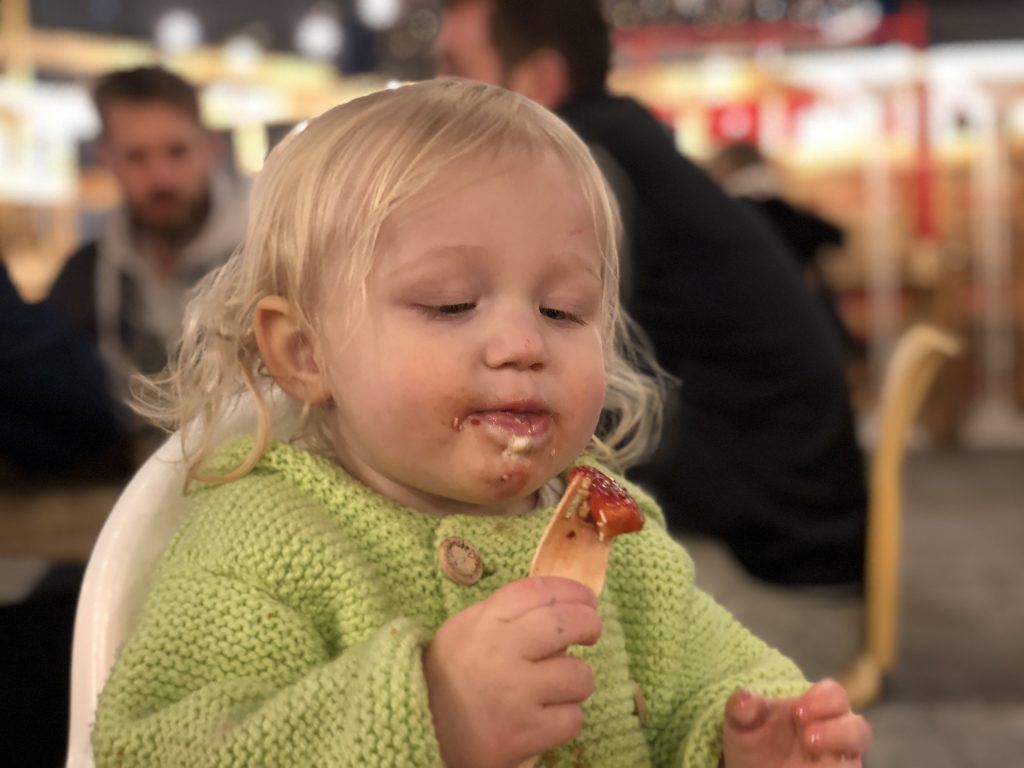