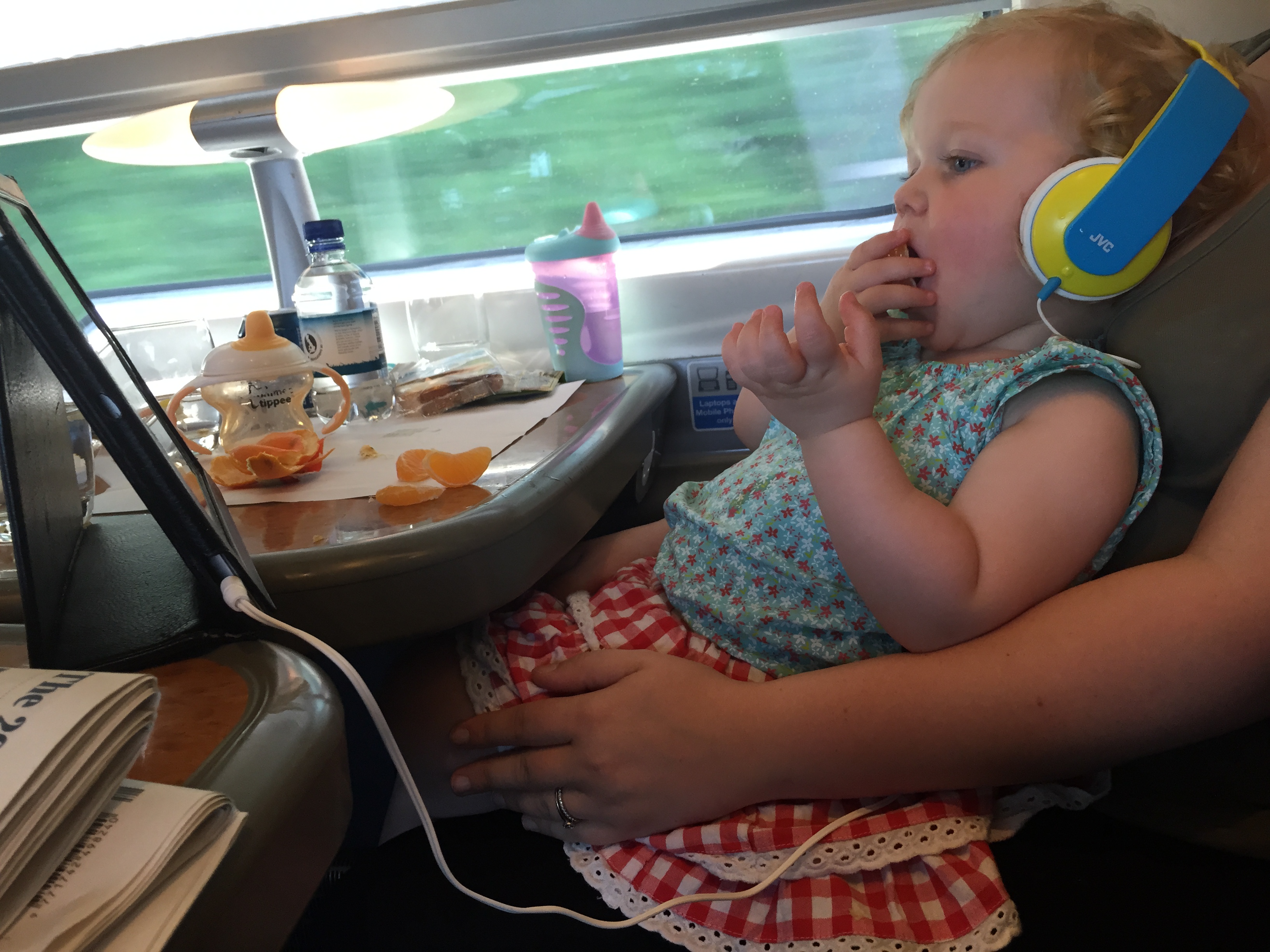 I was feeling a bit nervous about our first long journey along with a tiny, noisy, fast moving human who has no sense of boundaries whatsoever. But honestly it went surprisingly well: we didn’t lose any of the (masses of) luggage we took with us, we didn’t lose a toddler, we had a nap on the train and we managed an entire journey with just one meltdown, prior to said nap obviously.

Our journey was just less than 5 hours door to door; we hopped in a 5 minute taxi from our house to Glasgow Central, we had about 10 minutes to get on the train and sorted before it departed, the train journey itself was just over 3 hours 30 minutes and then since there was a tube strike in London we waited in a taxi queue for a while and got a taxi to our hotel which altogether took about an hour since the traffic was insane due to said tube strike. That was the worst part of our entire journey but hey, that’s London I guess.

My husband and I have done this journey many times together (including once whilst almost 8 months pregnant during the hottest summer ever – that was not a lovely comfy train ride). It’s our annual pilgrimage to watch some tennis and spend some time with some family and friends. We did the same journey one year ago (with a slower but no quieter tiny human who liked to sleep a lot more) but I knew it was going to be quite different with a toddler.

The little lady was in a fantastic mood and thankfully was wonderfully behaved throughout the journey. I had expected it to far more stressful, trying to keep her entertained and reasonably quiet within the confines of our two seats, and with our rush to the train station and to get settled onto the train I admit I was pretty stressed at first. But after we’d sat down for 5 minutes and got a wee cuppa I realised that it really didn’t matter if she made noise or if one of us had to take her a walk. At least we weren’t on a plane.

I’d tried to be as prepared as possible with snacks and entertainment for the little lady and I did pretty well in that respect. But I also had a few fails, so I thought I’d share my toddler train travel tips with you!

Don’t Be Too Prepared

Yes, I definitely over-prepared. And by that I mean I packed way too much stuff for the little lady. She had plenty of snacks for the train (and for another week after our return) and had loads of things to entertain her, but we had to carry all of that plus our suitcase and all the other crap I decided to take.

With hindsight, I definitely did not need all those clothes for her and she didn’t need the extra books and a few other toys that I’d decided to keep cramming in. The travel toys I’d made were plenty for the train and we were hardly in the hotel (when we were she played with the bidet, drawers and shower door over any of the multitude of things I’d brought with me). Next time I’d take less ‘stuff’. And I’d remember my own underwear.

Getting To (And From) The Train Station

Don’t do what we did and end up rushing around like maniacs 10 minutes after you should’ve left for the station. We had planned that I would walk in with the little lady in the pram to get her to sleep before we got on the train (and then keep our fingers crossed that we could leave the pram up in our carriage) and husband would bring the luggage, but that didn’t happen.

Anyway if, like us, you don’t live too far from the station your easiest option by far is getting a taxi. I’m all about minimum stress, and unless you have a super reliable and punctual friend or relative available to drive you, any other option just adds to that.

The little lady likes to nap just after her lunch at around noon for anything between 1 & 2 hours. We decided to book our train for about 12 thinking that she’d be pretty excited and then she’d crash out. She did eventually, but with all the excitement of a train and everything that goes with it she fought that nap like no other. If you have a toddler who won’t nap if overstimulated I’d definitely take that into consideration.

We travelled on a Thursday around lunchtime and our train was pretty quiet for much of the journey. If you can, I’d say try to travel when the trains will be quieter. Avoid peak times if you can as a busy train will just add to the stress (and the discomfort).

We took the pram on the train with us and stored the things she needed for the train in a bag under there – you know, nappies, toys, etc, alongside a cool bag with water and snacks. We were able to leave the pram up since our carriage wasn’t busy at all, but it would’ve been easy enough to just move those few things out of it and onto the luggage rack. There’s plenty time to get yourself ready to get off a train even if your station isn’t the end of the line.

Despite the fact that I overpacked, the amount of luggage we had was still doable. Along with the pram we had one reasonably big suitcase with us, plus a handbag for me and a rucksack for husband. Had I been on my own with her it would’ve been ridiculous but one of us took the pram and the other the suitcase so it was totally fine.

There were 2 of us to wrangle her on the train. If there are 2 of you travelling with your toddler it makes sense to take turns. Besides, they are tiring little creatures, so it’s only fair!

It’s All About The Nap

Yep, I’m talking about naps again. It’s worthwhile thinking about where/how your toddler will nap on the train if you decide that’s where they’re going to nap. Luckily the little lady will go to sleep in our boba carrier so that worked well for us.

You might be able to leave the pram up in one of the disabled bays with your little snoozing in it. However if this area is required by someone with a disability you’ll need to put the pram down. Will your toddler sleep on your lap or in a carrier? And will you be able to sit with your carrier or will you need to stand/walk the corridors of the train for an hour? If they are going to nap on your lap, I’d probably take a little pillow and blanket or something comfy and cosy.

We booked a table seat and on our journey to London there was a businessy type guy sitting across from us all ready with his laptop out, type type typing. When we arrived and took our seats he moved himself not just out of the seat facing us, but out of the entire carriage. Which meant we had a table to ourselves the entire journey. Grumpy business man = Bonus.

Go For A Walk

Before getting on the train or when you are on the train. Either way you can get some of that excitement and uber-energy burnt off. We weren’t there early enough to have a wander around the station looking at trains and whatever else we could find, but we did go wandering up a few of the train carriages. There are buttons between each carriage that any toddler will love.

It’s wise to avoid taking a stroll up the train carriages when you’re coming up to a station as there are lots of people moving around, to avoid times when the food carts are around and to try not to go into the quiet zone, but apart from that go nuts. It stops your bum from going numb anyway. As long as you’re not a germophobe, a trip to the toilet can be pretty fun too; there’s a ton of buttons in there.

The only I’d suggest is to keep ‘going for a walk’ until your toddler absolutely won’t sit any longer. Once the little lady realised that going for a walk was an option, that’s the only thing she wanted to do.

The little lady is a snack-aholic. As soon as she sees the snack bag I get the word “nacks” yelled at me over and over and over, like a toddler version of a Finding Nemo seagull. It’s my own fault though. I’m a snack enabler; sometimes I have enough snacks in my handbag to make an entire lunch for her.

But I digress. The best snacks to have on a train are those that won’t stick to people near you if they are flung across the carriage. Snacks I took with us (for the trip, not just the train) were:

I made quite a few ‘travel toys’ for the little lady for this journey. These also doubled as ‘eating in a restaurant toys’ in London, and I use them all the time now when we’re in cafes and restaurants and supermarkets and anywhere else the little lady doesn’t want to sit. I’ve written about them separately here.

Our emergency back up though, is the iPad. You can download stuff and save it onto your iPad (or any other tablet) from bbc iplayer, Sky, Netflix and various other sites. They last anything up to a month on your device, but some of them you can only watch once. We also put a few Elmo and Peppa DVD’s that she got for her birthday on there, so now we always have those if we need them. A set of kiddie headphones come in pretty handy too; at least then you don’t need to listen to it as well.

I’ll admit it – we got first class tickets for the train. If you book far enough in advance its only a few quid extra each. For those few extra pounds you get more space, table service and a meal, tea/coffee the entire trip and various snacks. It’s well worth it for the space alone when you have a wriggly, bouncy, sweaty, noisy, can’t sit still for a second tiny human on your lap. If you don’t book well in advance in can be quite pricey though.