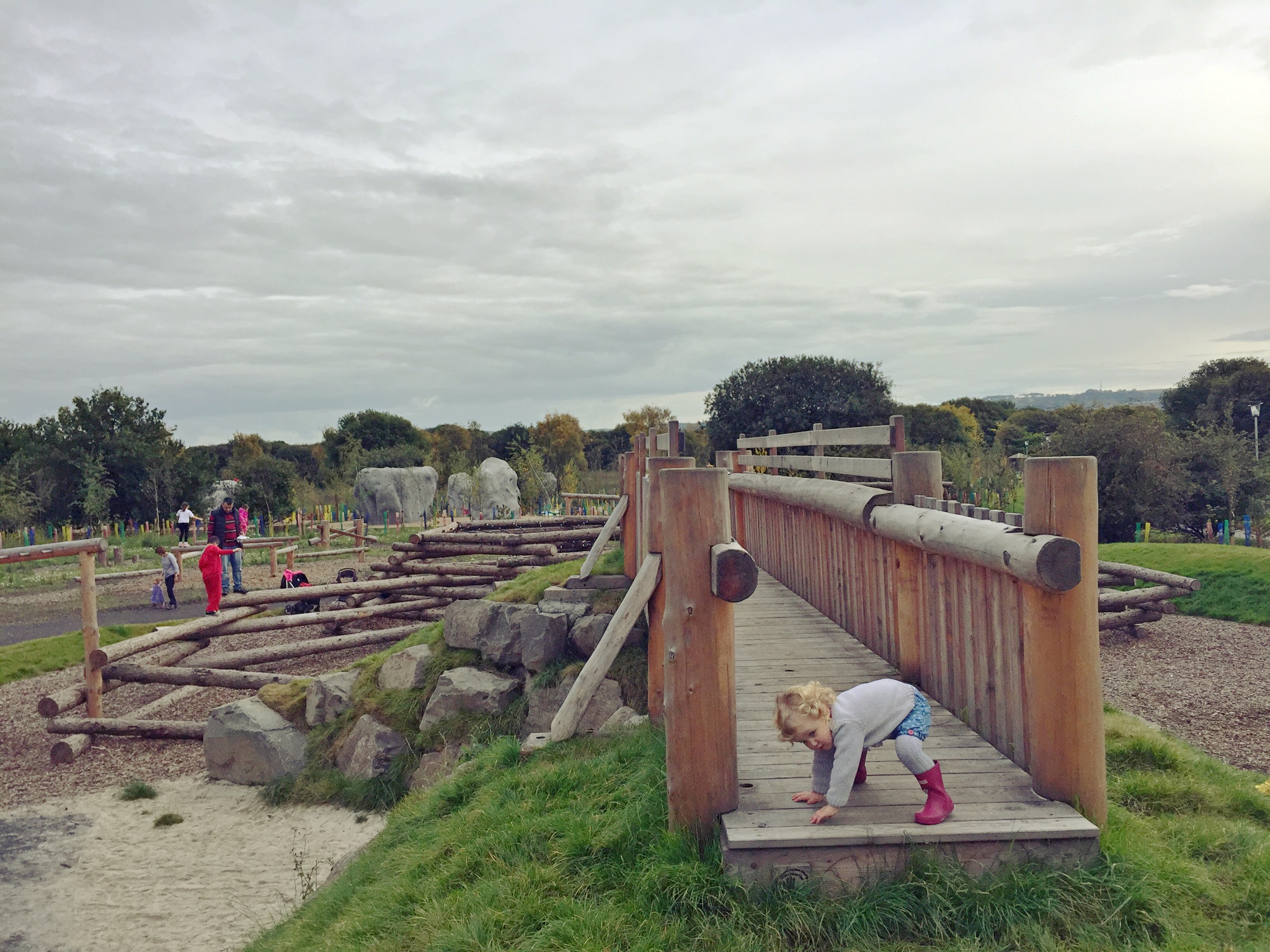 We went east today, to see and have a wander around Cuningar Loop, a new Forestry Commission park over in Rutherglen. 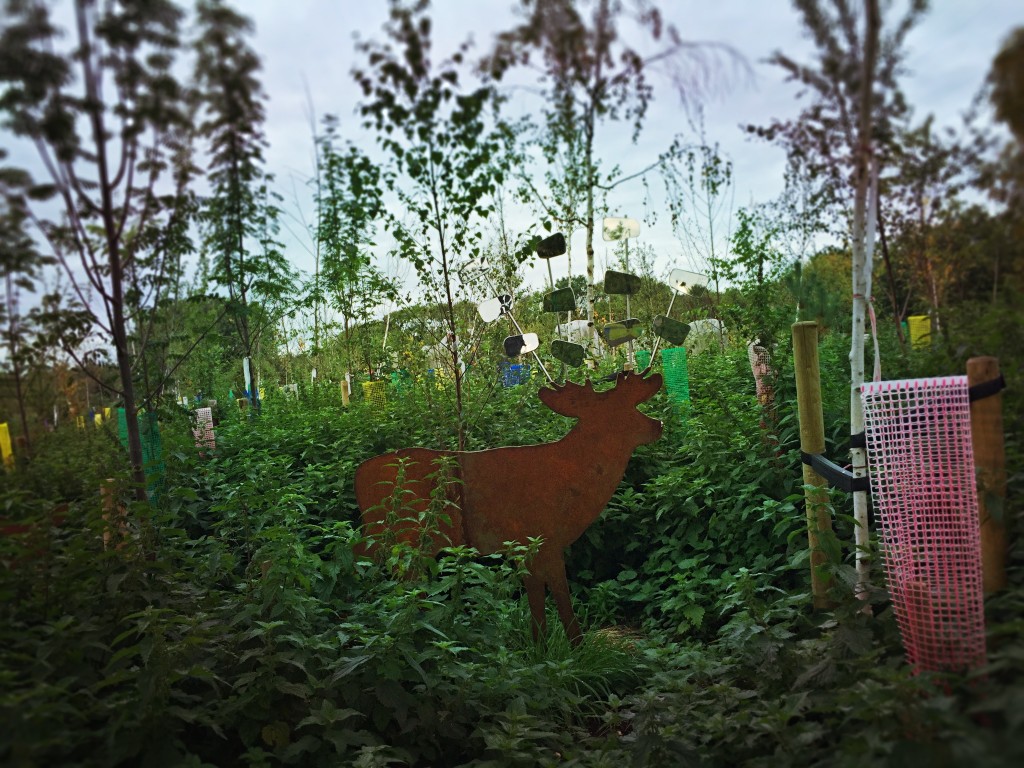 The project is a Commonwealth Wood, part of the 2014 games legacy. It is a £5.7 million legacy project which has transformed 15 hectares of derelict, unused land into a shiny new park and attractive community greenspace. 15,000 trees have been planted here and they are also creating a wild flower meadow which sounds quite exciting.

The park has quite a few different bits to see and explore. There’s a bike pump track which had quite a few kids scooting around on their bikes and scooters. It looked pretty fun, going over the humps and bumps! Both my kids absolutely love this part. It can quite busy though on sunny days (especially with everyone only being allowed outdoors these days) so be prepared to have to slow down a bit on the track. 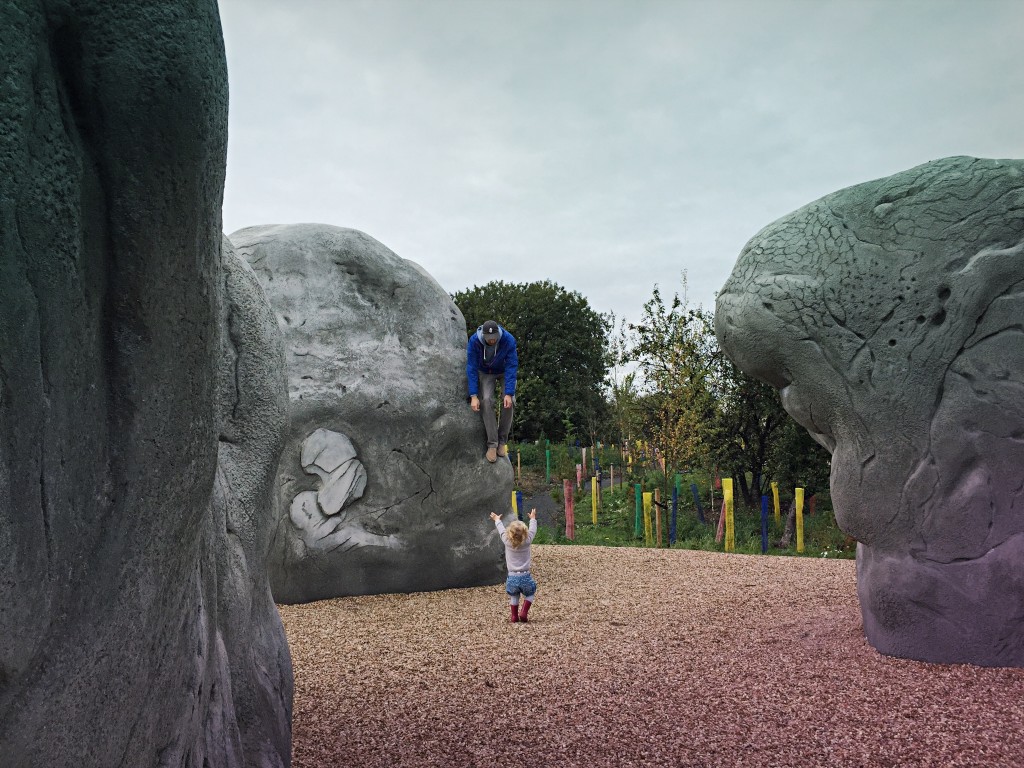 Cuningar Loop is home to Scotland’s first outdoor bouldering park. My husband loves a climb, and had to have a go. His verdict was that some of them are pretty tall – they are not for the faint hearted! The bouldering park is pretty big and was a lot busier than I expected. My kids are like mountain goats and have to climb everything they see so they absolutely love having a climb in here. The wee man struggles to climb them are they are a bit too tricky for his little legs at the moment.

There are about 7 or 8 big rock formations, and on each there are difficult bits to try and climb, and easier bits for the inexperienced to get up. I also had a go although I didn’t get very far – it’s a tiny bit rough on the hands. Besides, I don’t think I’d ever have gotten back down had I got up on top of one. 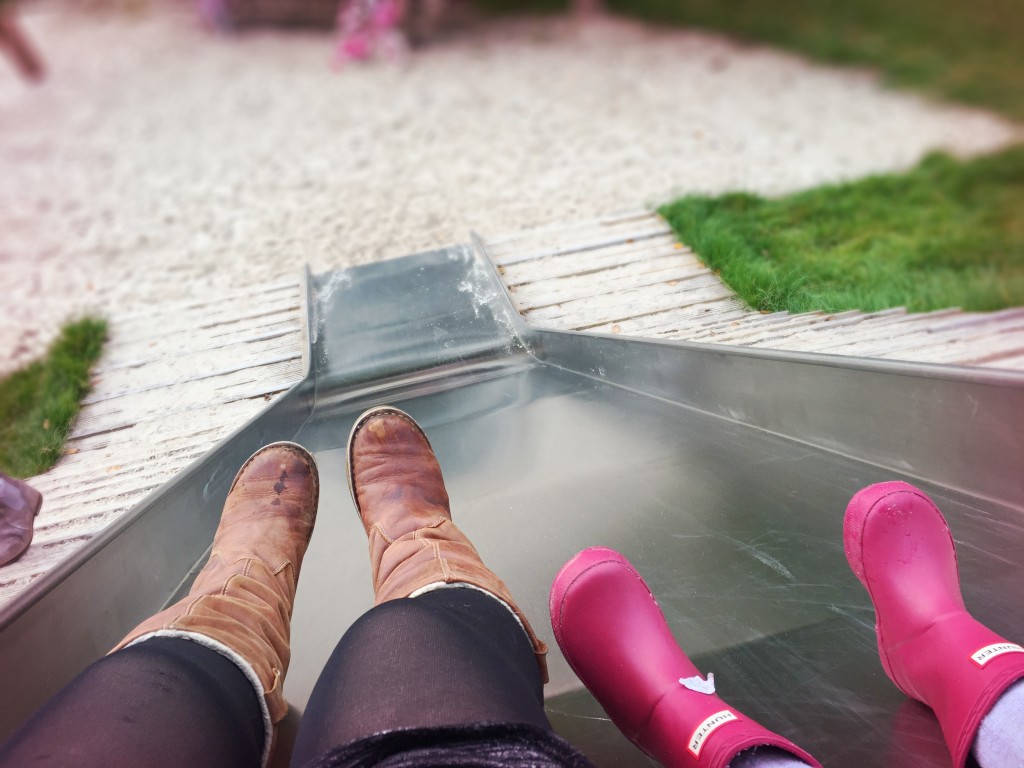 We played in the adventure playground for a while. There are swings, a sand pit, tree tunnel, flying fox, lots of climbing frames and a few sets of monkey bars, a bridge and a slide. It’s really fun.The slide is quite difficult for little kids to get up to (I had to go with them when they were tiny & so have had many turns on this slide – it’s fun) but there’s something to suit all ages. 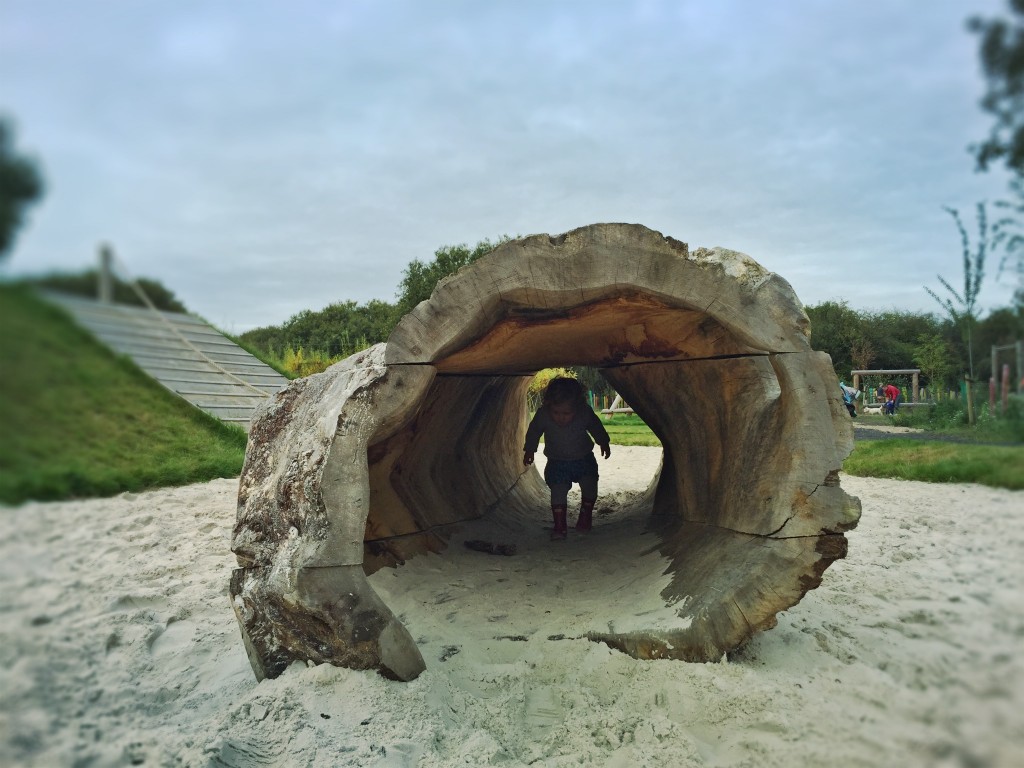 We took a stroll along the boardwalk which goes alongside the river. It’s a really peaceful walk (until you take a toddler who likes to sing at the top of their voice). The boardwalk is probably almost a kilometre long. It’s custom built and fully raised off the ground, meaning that in winter (and every other season) it won’t be covered in muddy puddles – or submerged!

I’d go back just to go a walk along the boardwalk – I found it really relaxing. After examining a bunch of leaves and blades of grass and a few snails, the kidsdecided the boardwalk was a running track. She was knackered afterwards!

The wild flower meadow isn’t finished yet, but the benches around it are all in place. It doesn’t look like much at the moment, but I think it’s going to be really pretty when it’s grown.

The whole park was completely full of saplings and tiny trees protected by different coloured mesh when we first went along. That in itself was pretty cool to see! Now though a lot of the trees are much bigger. It’s really starting to look and feel like a proper woodland. 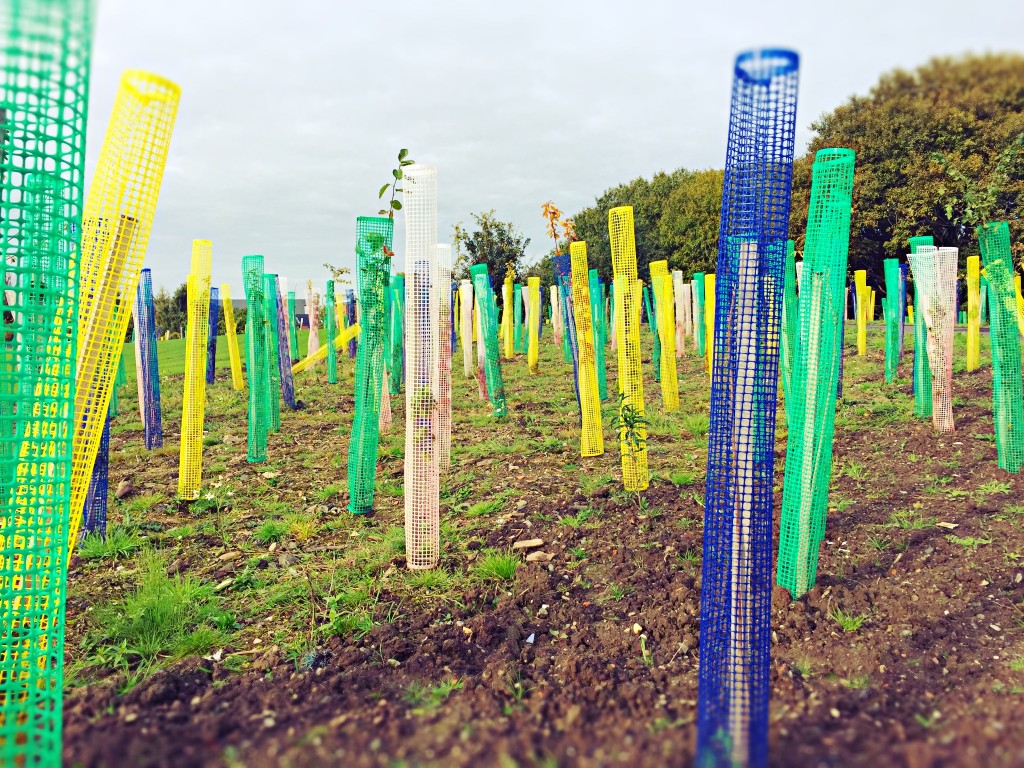 The park isn’t huge; you could walk around the loop in about 25 minutes. But there’s tons to do when you’re there. 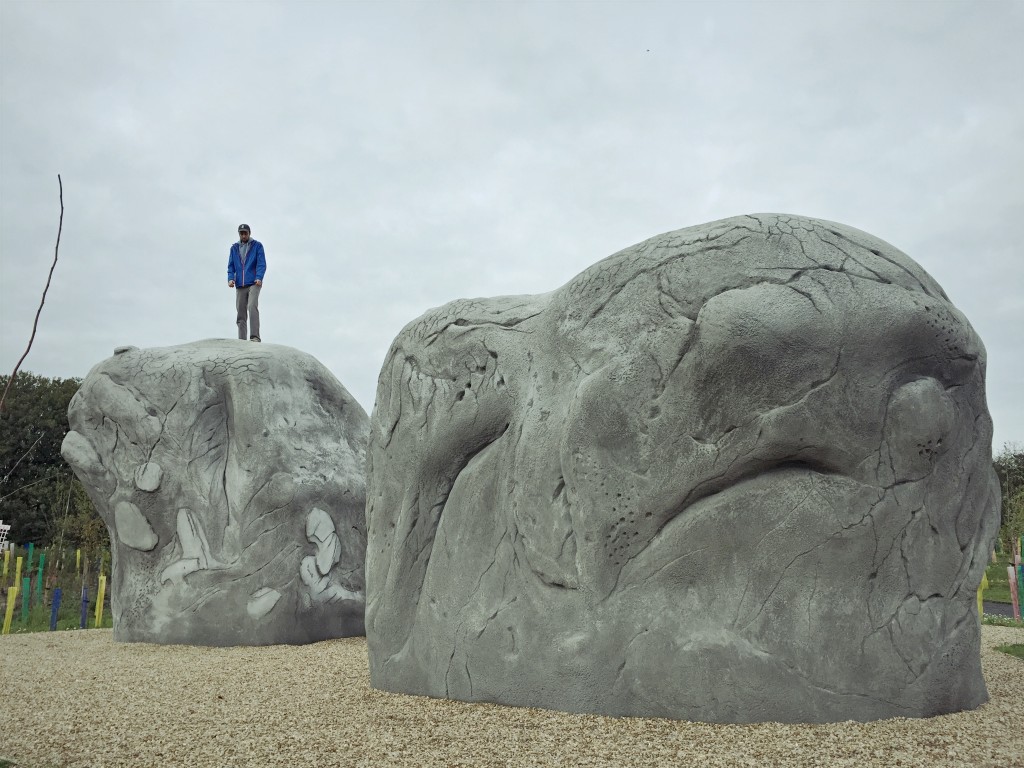 Cuningar Loop is a really pretty park, and will be even prettier as it continues to grow. It’s more than that though; it’s a really cool park and is completely different from any other in Glasgow. The whole place is one big adventure, and there is tons to do. My kids adore it here. It’s well worth a visit! 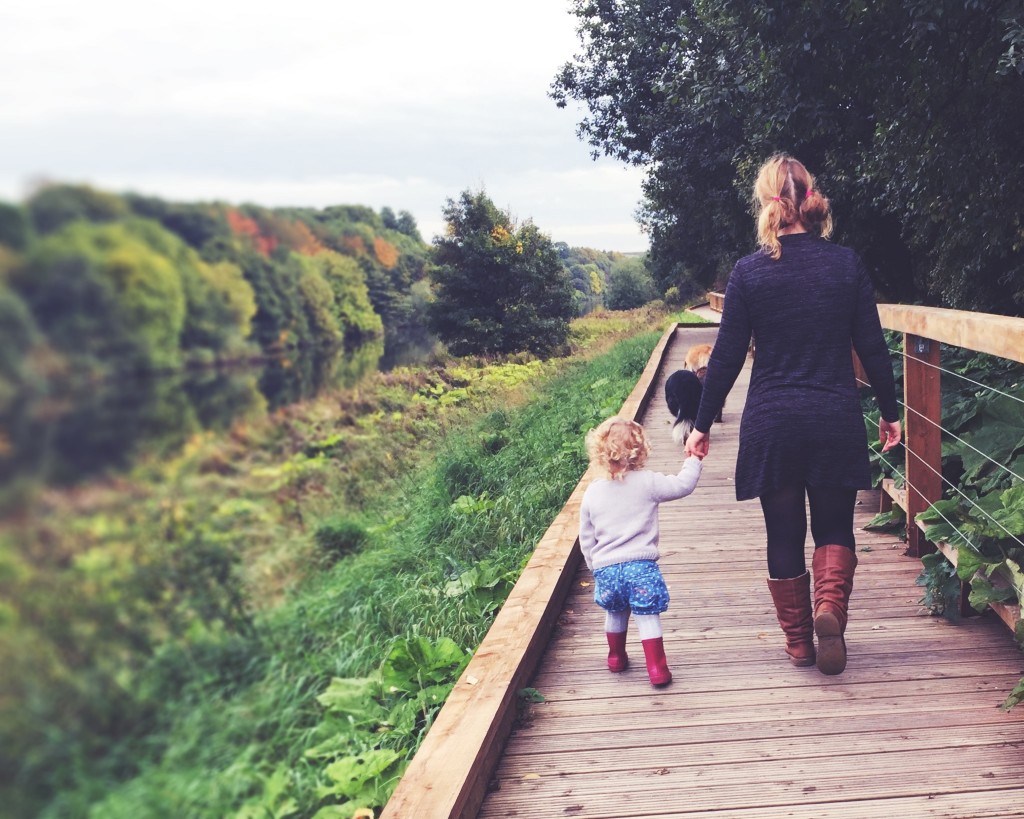 Cuningar Loop is located in Rutherglen, across the Clyde from the Commonwealth Games Athletes’ Village at Dalmarnock. The nearest postcode is G73 1PW.