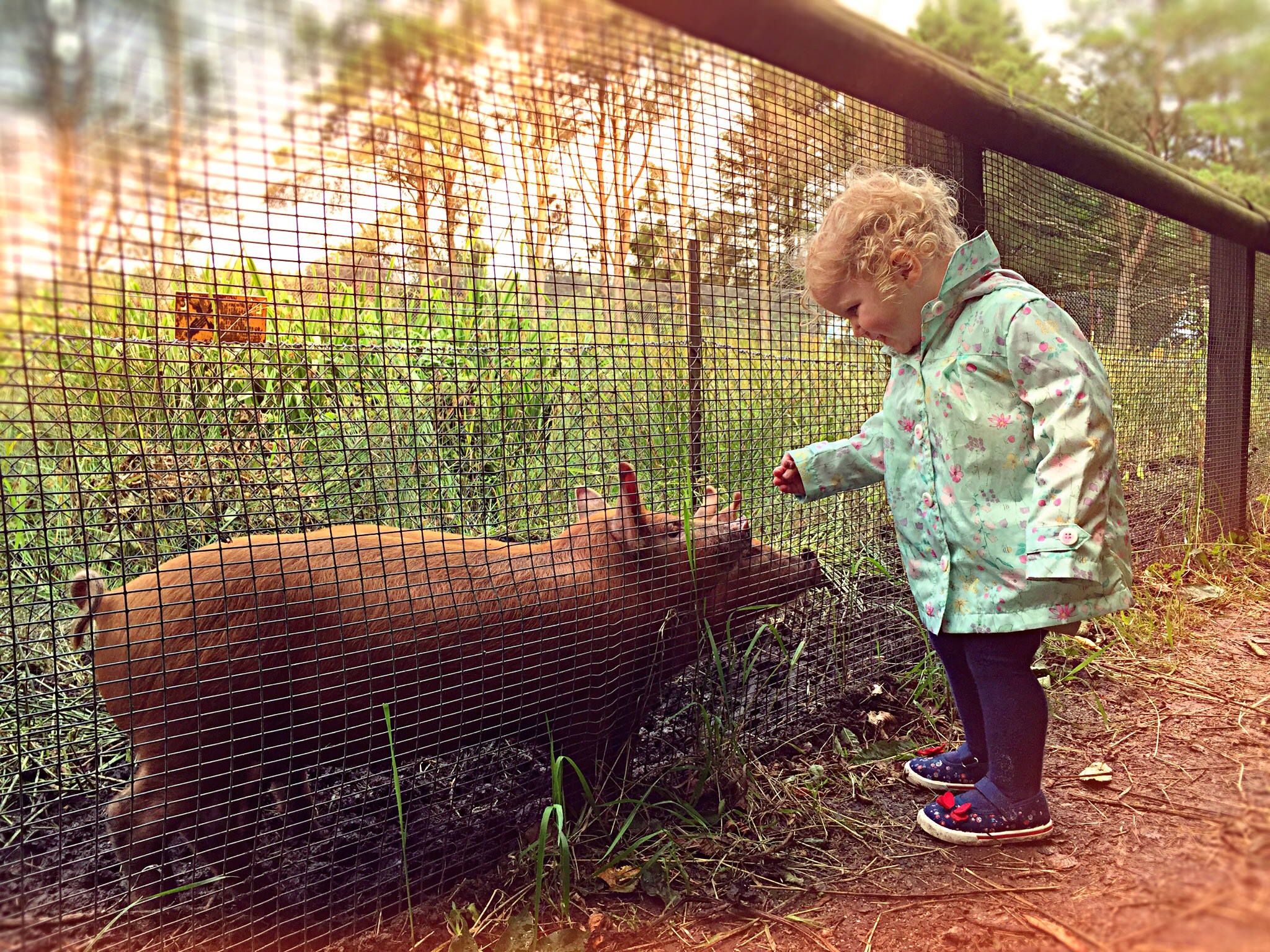 There are so many parks and outdoor things that we have wanted to do this summer. We’ve been waiting for a sunny day (for which we had nothing else organised) to coincide with a weekend for at least a month and a half.

Last week I finally accepted that summer has deserted us, and that this magical sunny day is not going to happen any time soon. So we got the rainproofs out again, decided just to brave the horrible summer weather and go to all the places on the list! One of which was Palacerigg Country Park. 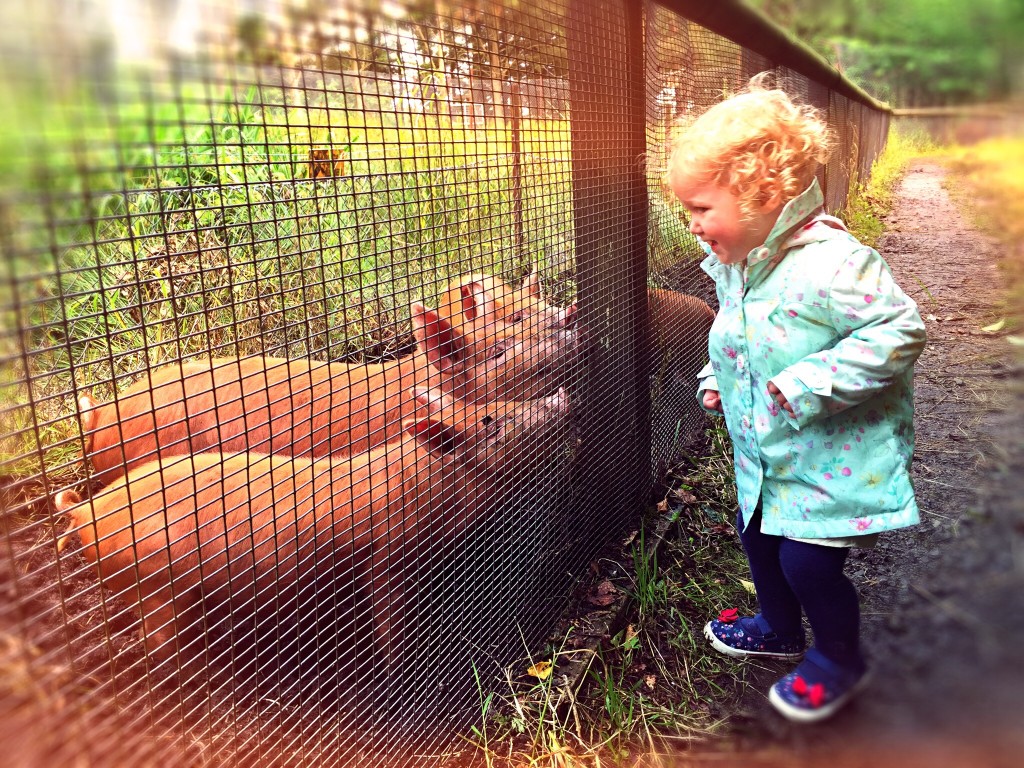 We’d been before, in our pre-baby lives, just with the dogs. Back then we had no reason to go to the play park, and since we were there to take the dogs a walk we didn’t ever go see the children’s farm either. I was very pleasantly surprised!

The children’s farm at Palacerigg is really nice; it’s not massive, but it’s free to have a look around. And they have quite a few different farm animals: sheep, goats, pigs, chickens, rabbits, ducks and a cow, plus a few others I’m sure I’ve forgotten. 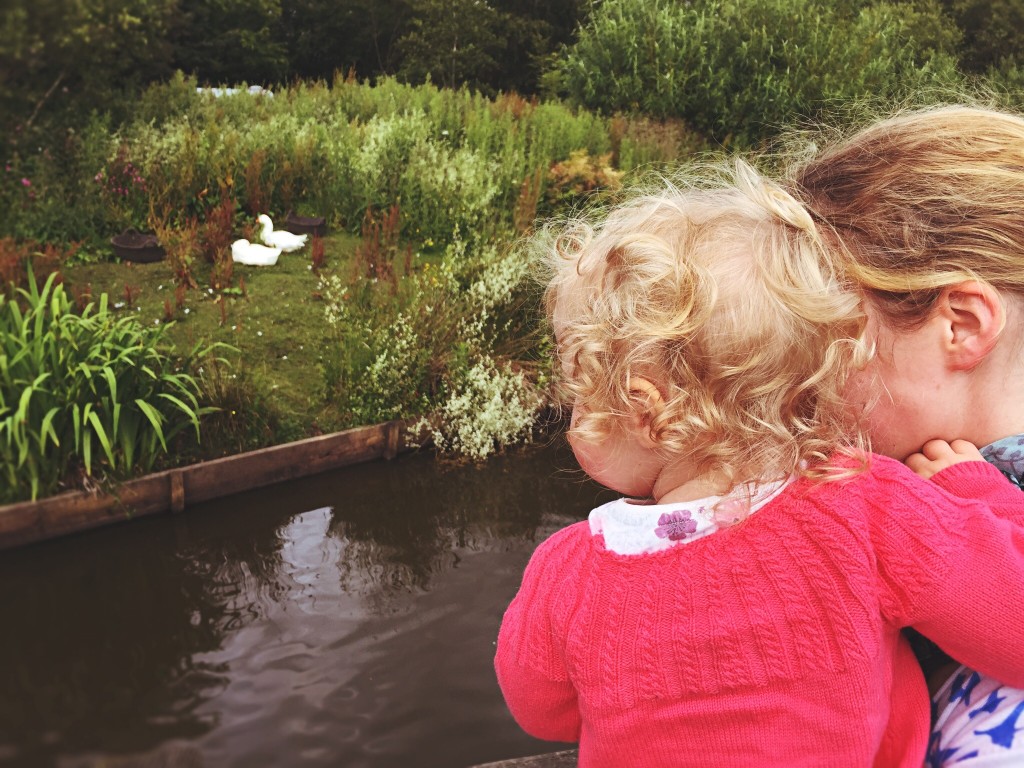 There’s a bridge to go over the duck pond which was pretty exciting for my little lady. And there’s a little playhouse/shed that she found quite fun too.

I remember when we were last there (a few years ago) it looked slightly run down, but it’s clearly had a makeover since then. The animals looked in good condition too. 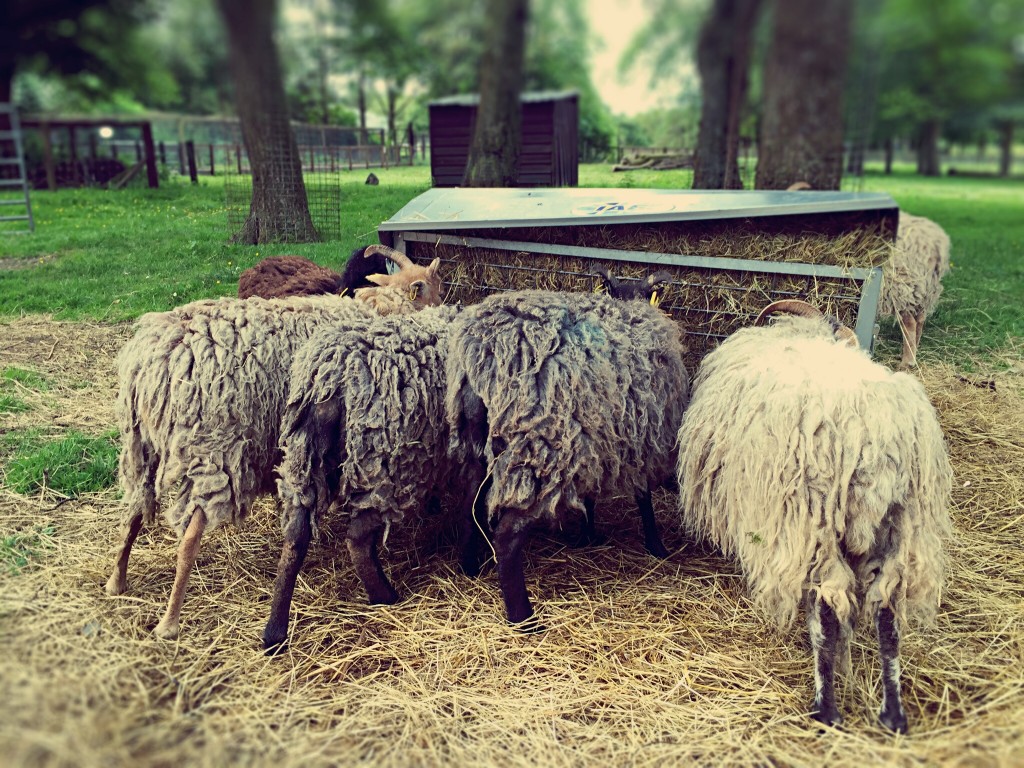 The little lady had a fantastic time running around making noises at all the animals and yelling “What’s that?” really loudly at every single individual animal at least 4 times. Apparently pigs are the most hilarious animals on the planet. The roaming peacock was strutting his stuff when we were there too. He’s a very pretty boy, but he does like to shout. 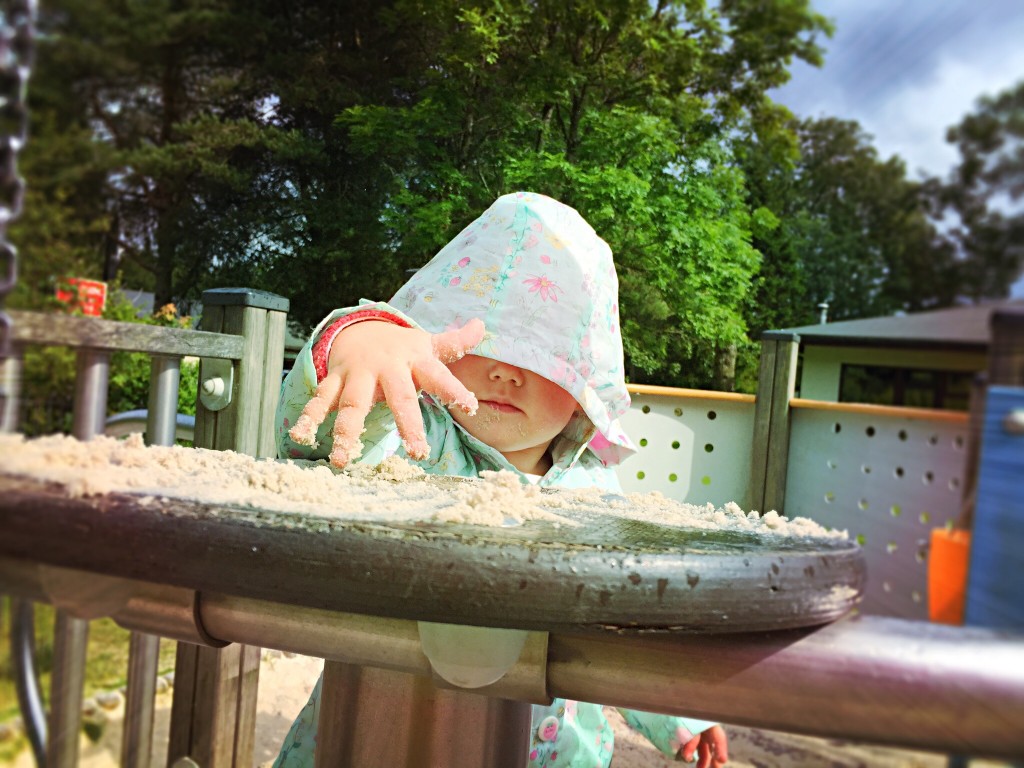 This was a firm favourite with the little lady. There’s a sandy play area, quite a few different swings, some roundabouts & other spinny things and a flying fox. Great fun. And good for a wide age range too.

The cafe, located in the visitor centre, looks nice. It serves teas & coffees, cold drinks and a nice selection of snacks and hot food. We didn’t eat whilst we were there, but I’ve heard from others that it’s pretty good! 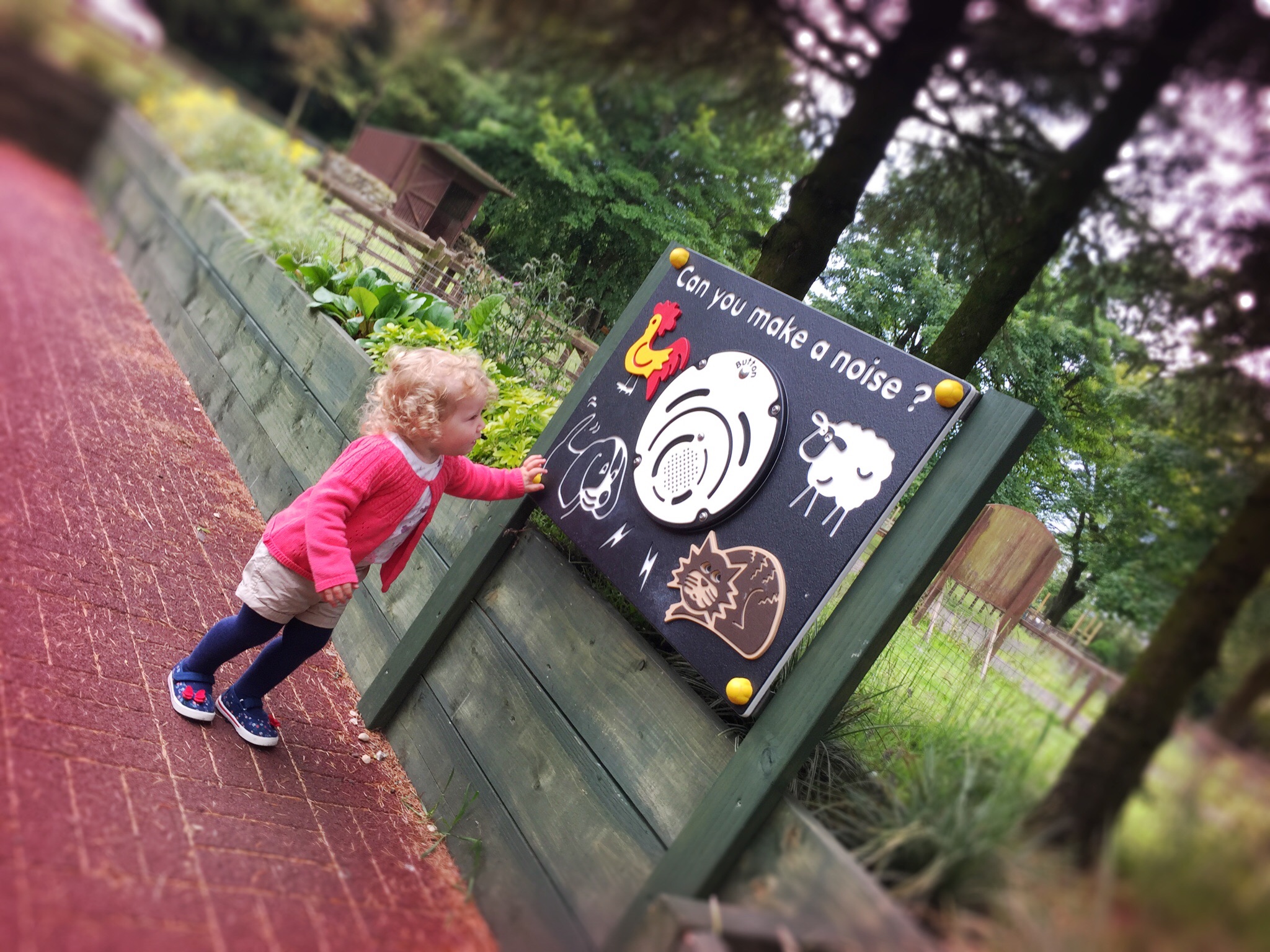 After we’d dragged the reluctant and very unimpressed little lady out of the play park, we took the dogs a walk.

The park is pretty big. A lot of it seems to be taken up by golf course (which you obviously need to keep your dogs & children out of). Golf course might not the worst scenery in the world, but it’s not really what I’d call “country park”. However you do get past that point and there’s lots of trees, a nice loch that you walk past and quite a few different paths to take. We didn’t explore all of them, because the elderly collie can’t go fast enough and the little lady was very much in an anti-pram mood.

The terrain wasn’t the most pram friendly. There were muddy-puddle-filled-potholes everywhere and some gigantic puddles that were pretty hard to negotiate. But as we are all so very aware it has been unusually rainy of late; it’s not always like that. Promise!

If you do go a walk you may come across quite a few horses. I’m only mentioning that because we have done during past visits, and the pensioner collie thinks that all wildfowl, wildlife and livestock are for her herding pleasure. It shouldn’t affect your children in any way though other than being quite exciting! 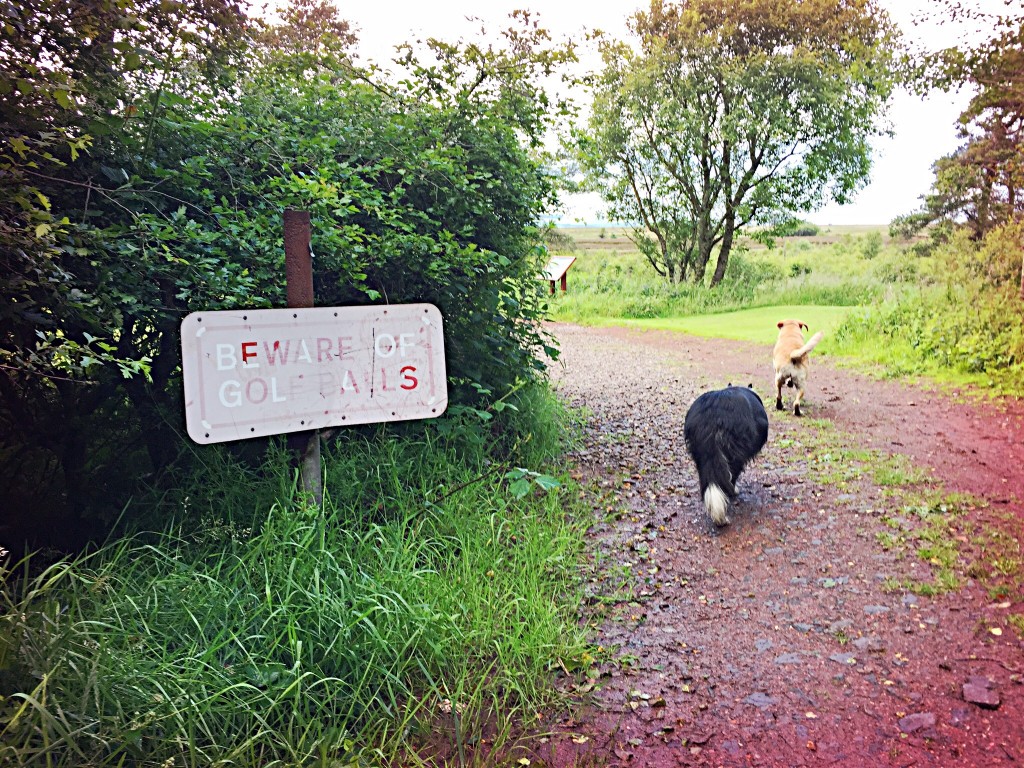 The park is about a 20 minute drive from Charing Cross. It has a (free) car park, which the resident peacock appears to quite like parading around!

Dogs aren’t allowed into the children’s farm, or the play park (for obvious reasons). They are allowed next to the play park & the visitor centre, so if there’s 2 of you there to wrangle the kids around the farm you can take turns each. It wasn’t a hot day when we went, so we left the dogs in the car while we went to see the animals. But it’s worth bearing in mind that if it’s a hot day you might want to leave the dogs at home. 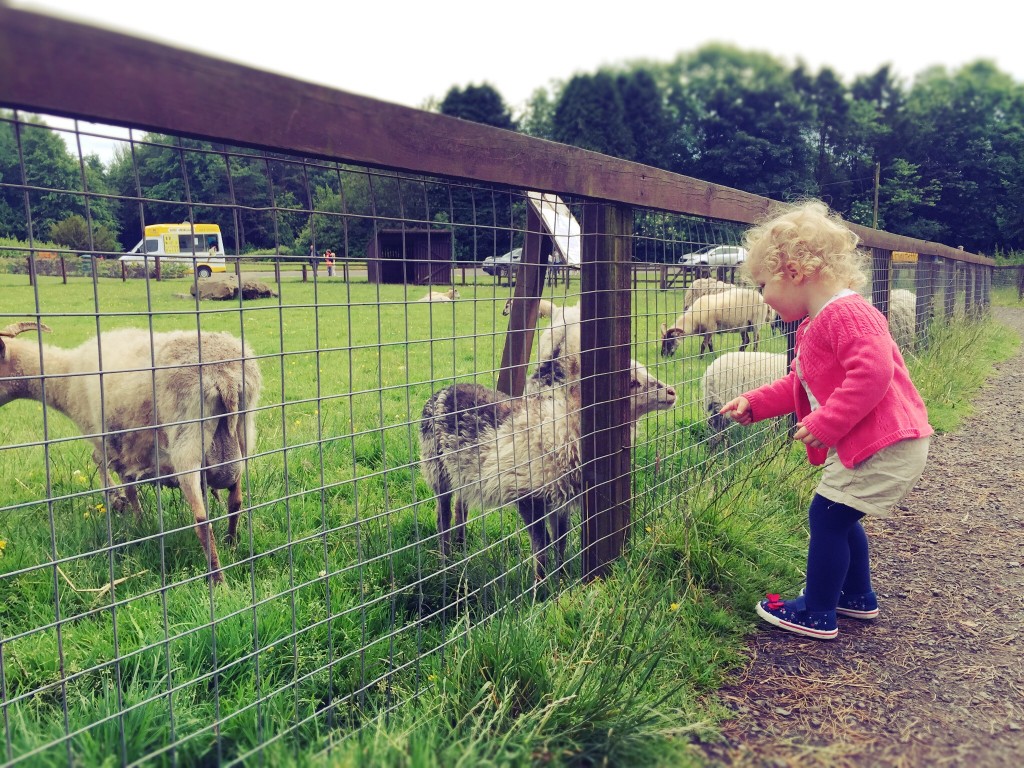 The little lady loves animals – any and all – and play parks, especially sandy ones. So this was the perfect way to spend an hour. If you happen to be a crazy like us who has a kid and dogs, it’s a great place to satisfy both!