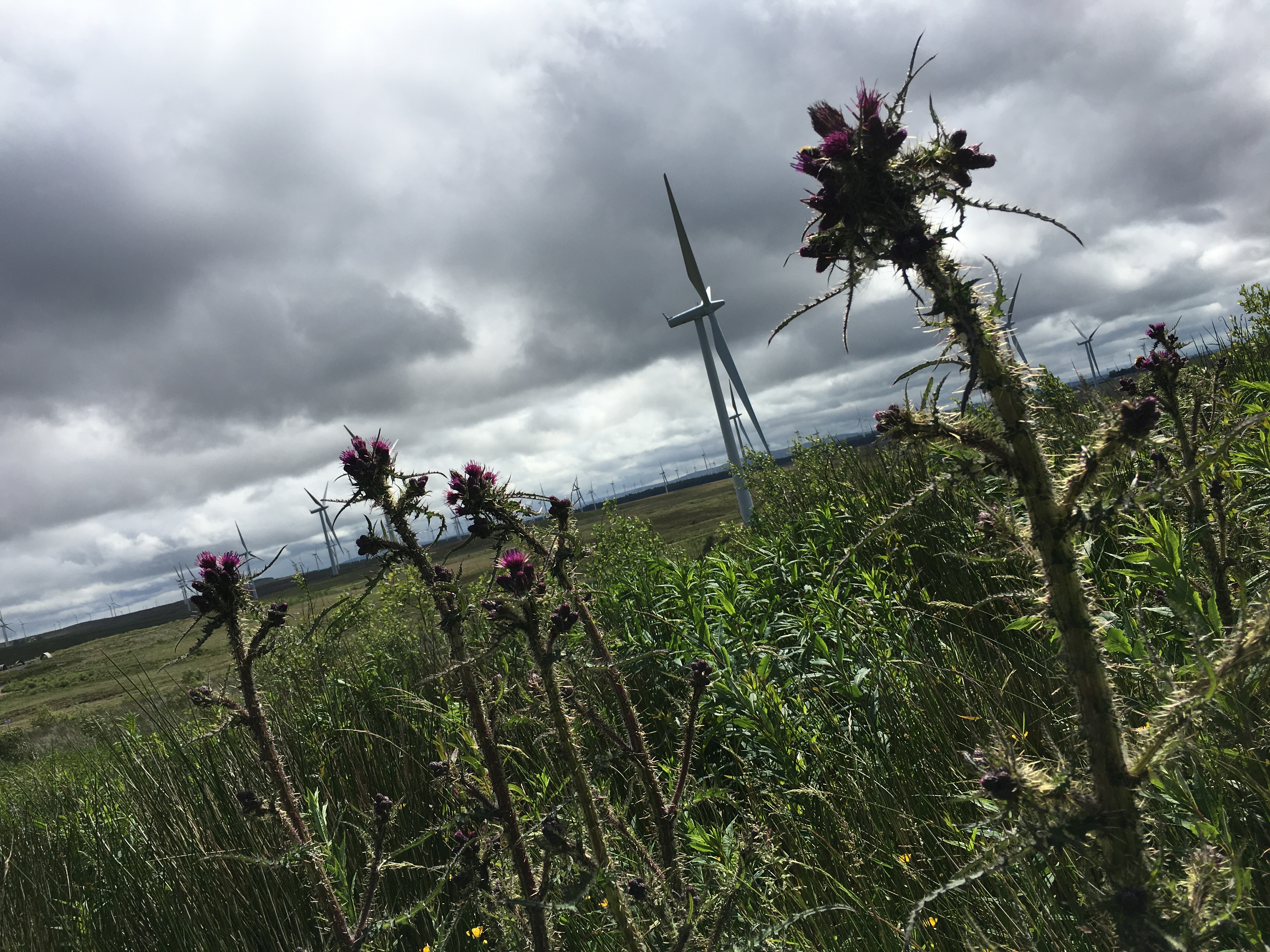 We’ve been trying to make the best of some pretty crappy weather lately and ventured out to Whitelee Windfarm in Eaglesham. The little lady had been a while back with her auntie & uncle but I’d never been out that way before. 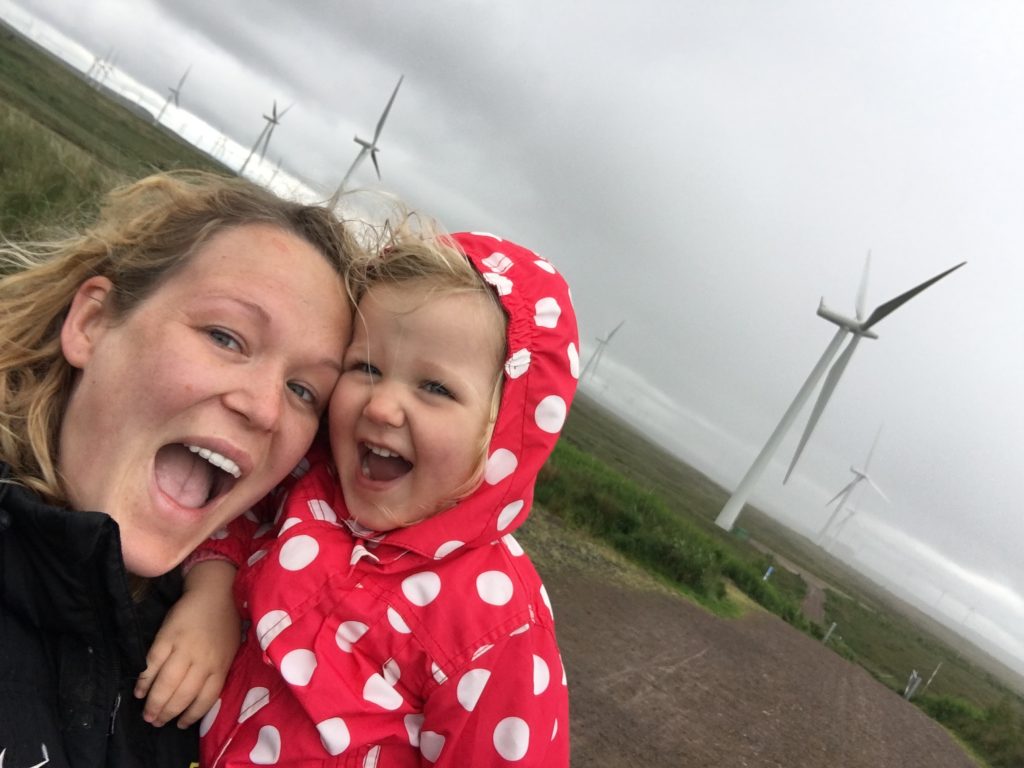 The weather wasn’t lovely but we got our jackets on and braved it. I’m guessing it’s a reasonably windy place anyway, what with the wind turbines and all, but it wasn’t cold at all when we were there despite the wind and drizzle.

There are loads of paths and trails to take, all around the windfarm. Something like 80 miles of paths in fact. You can get up close to the turbines just by walking around the various paths. They seem a lot bigger when you’re standing next to one! 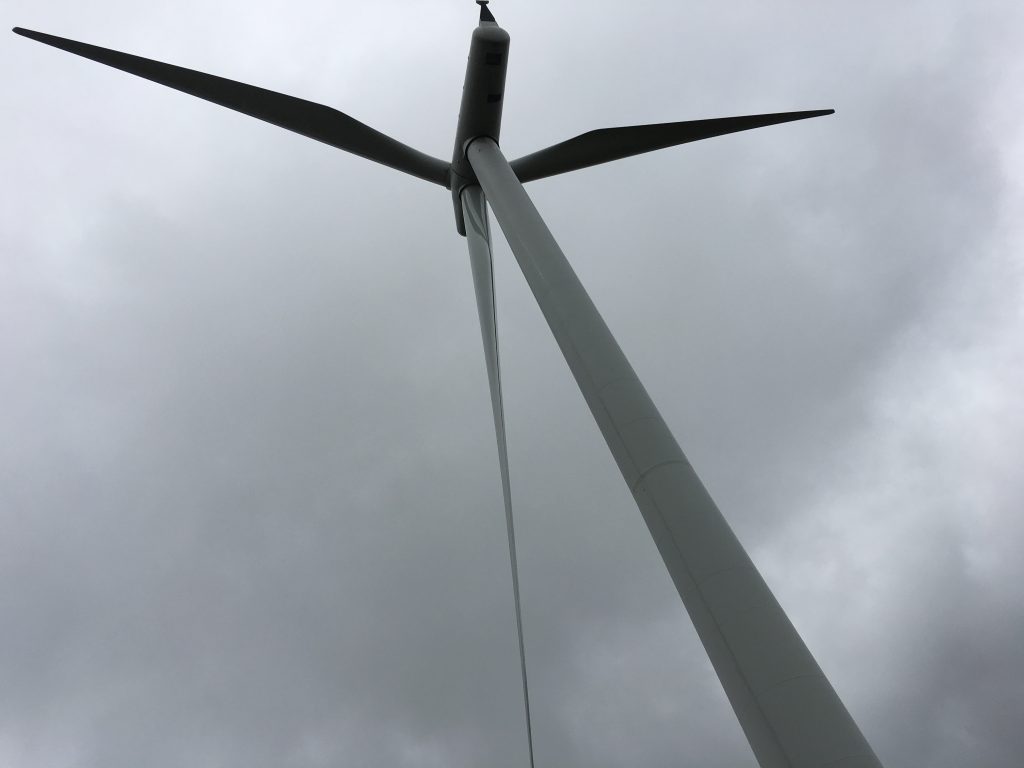 The paths are just dirt paths but they’re very pram friendly. (We have a Phil & Teds with proper tyres. I’ve never used a pram with smaller wheels so it might be a bit more difficult with one of those; I’m not sure.) It’s a great place for cycling too and there were loads of runners around when we were there.

The labrador loved it, but dogs have to be on leash unless they will stay close to you as there are some parts that are breeding areas for ground breeding birds. 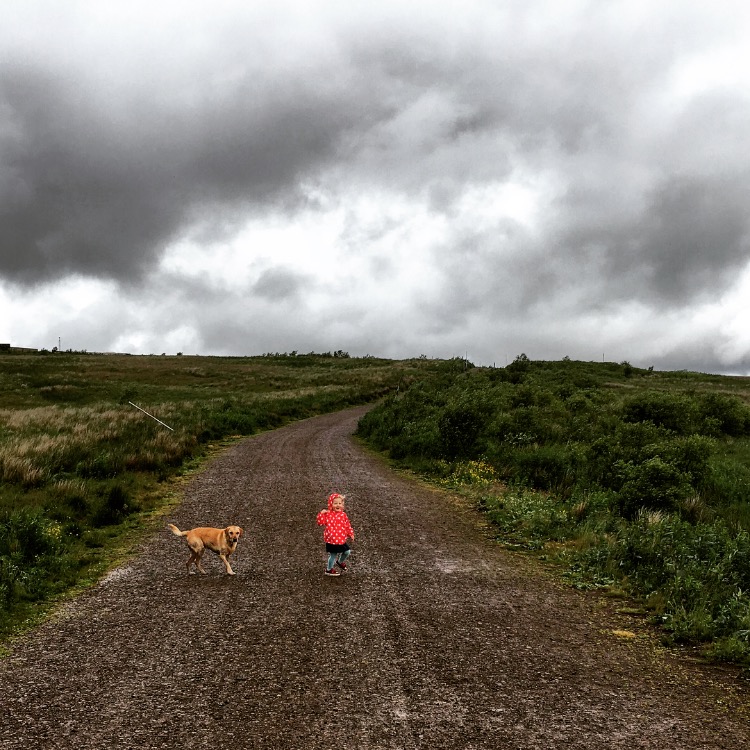 There are a few different bits to look at and buttons to press. It’s definitely aimed at older children than an almost 3 year old – probably primary age kids and up – but I did my best to explain the different things to her. She liked pressing the buttons regardless! 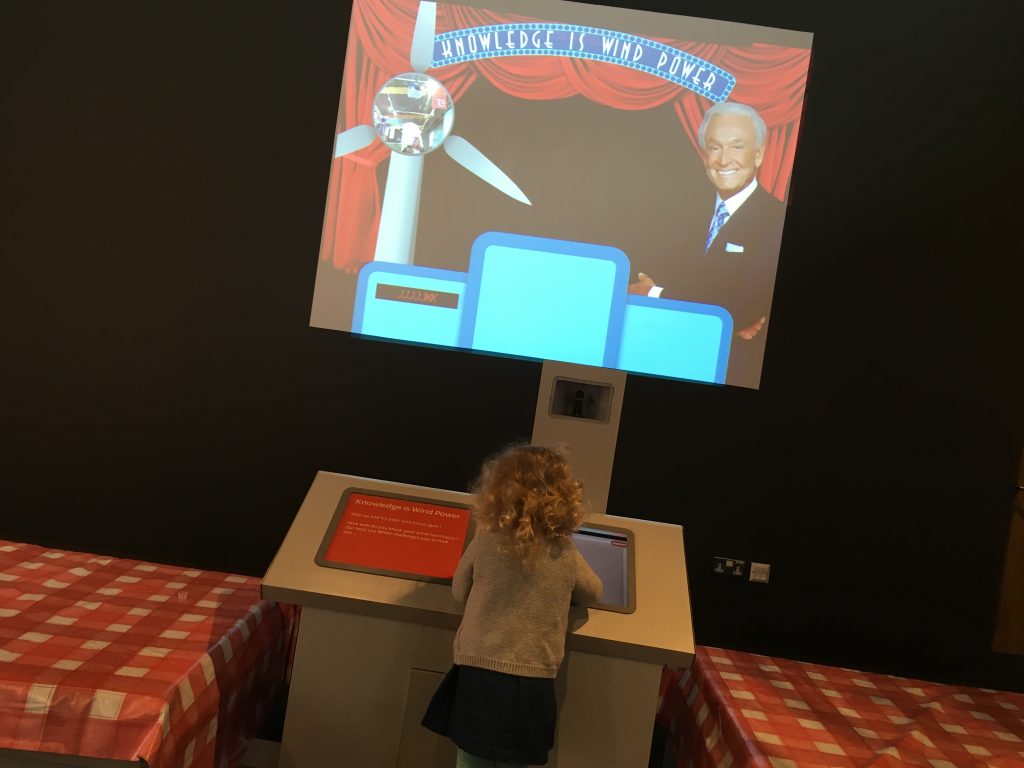 The cafe serves soup, sandwiches and paninis as well as some cakes and traybakes. I had a panini which was served with crisps and coleslaw. The little lady had a kids box which had sandwiches, an apple, a drink and a packet of crisps. The food was decent. I’d have liked to try the soup but it wasn’t ready yet when we went in at 12. 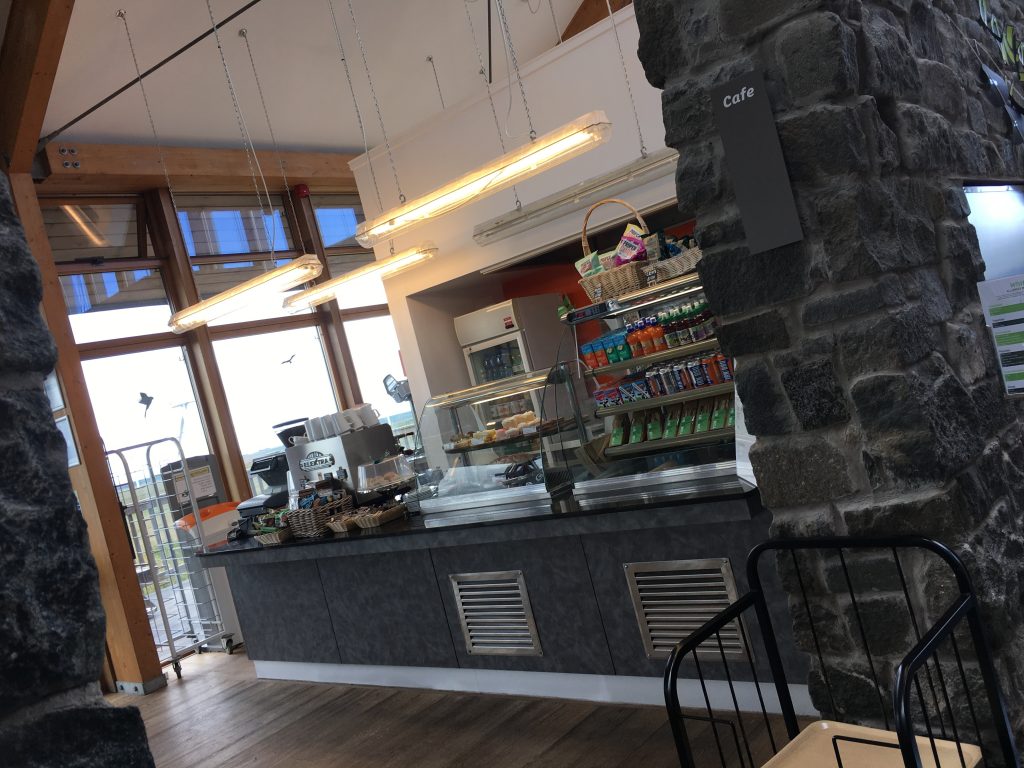 Moan alert: To be honest I was pretty annoyed with the very nice, but very slightly over-efficient cafe staff. We went to the toilet mid-lunch, as you have to do frequently with a newly potty trained toddler. I left my jacket & the little lady’s rabbit toy at the table but took our little bag with us which had al her clothing changes in it. When we came back to finish our lunch it was gone; all cleaned up. I admittedly had finished mine and only had my tea left but the little lady was halfway through her lunch. The cafe staff seemed completely surprised by the fact that we weren’t only going back to collect our belongings we had left at the table. It wasn’t even busy at that point. Anyway, the point is that toddlers like to pee mid-lunch and when I leave anything at a table it’s because I’m not done. Moan over. 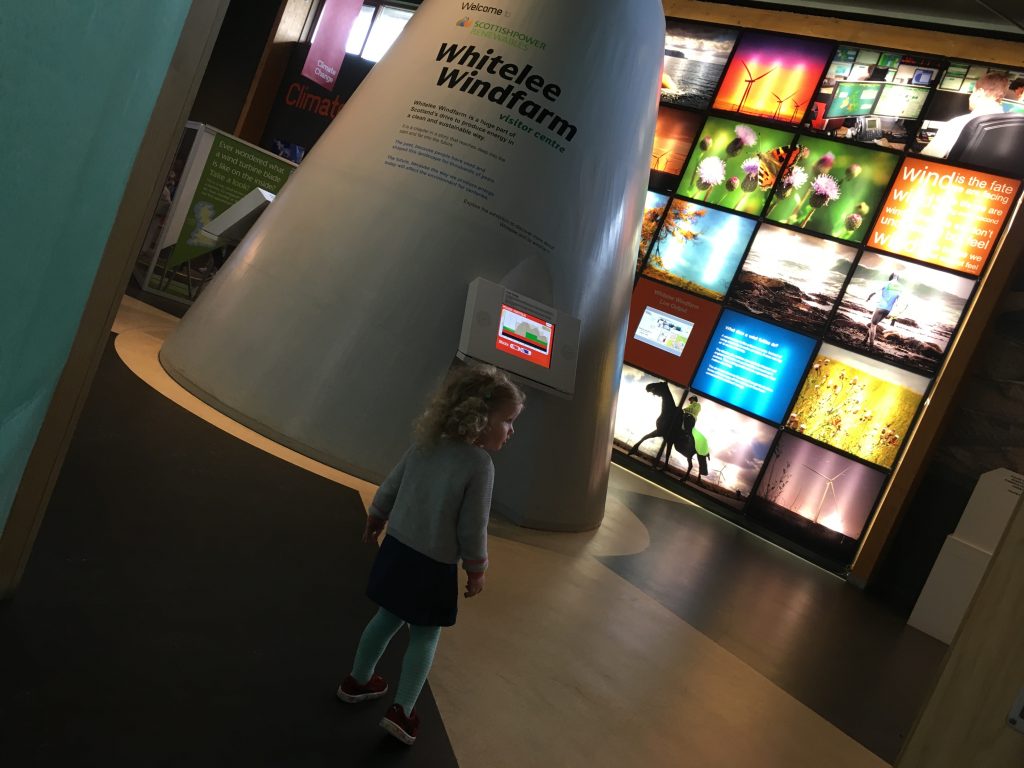 What The Little Lady Thought

“I like the windmills. They are very very big. My sandwich is yummy yummy.”

Whitelee Windfarm is a nice place to visit. The cafe is a nice post-walk place to sit and warm up (or dry off) and the exhibition was interesting (for me). 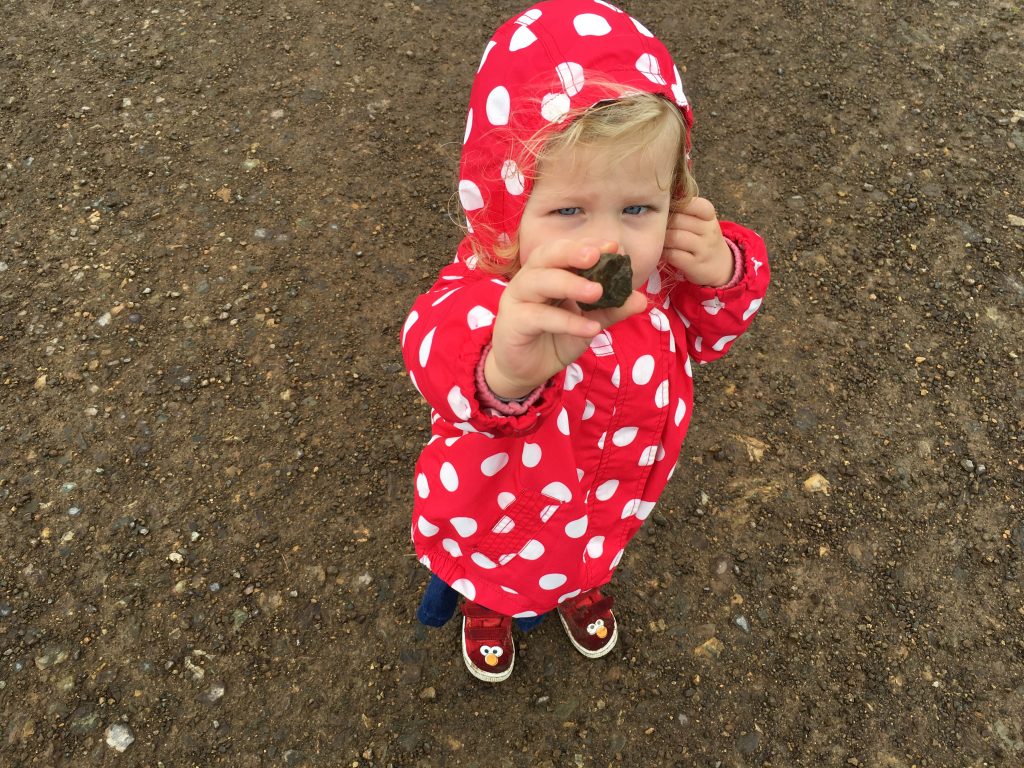 The windfarm itself is both rugged and picturesque, and the wind turbines are pretty grand up close. I like a nice bit of scenery when I’m out walking and Whitelee Windfarm definitely provided that. When the little lady is properly and confidently riding a bike it’s somewhere I’d definitely consider taking her. For now we’ll stick to walking the dog there!