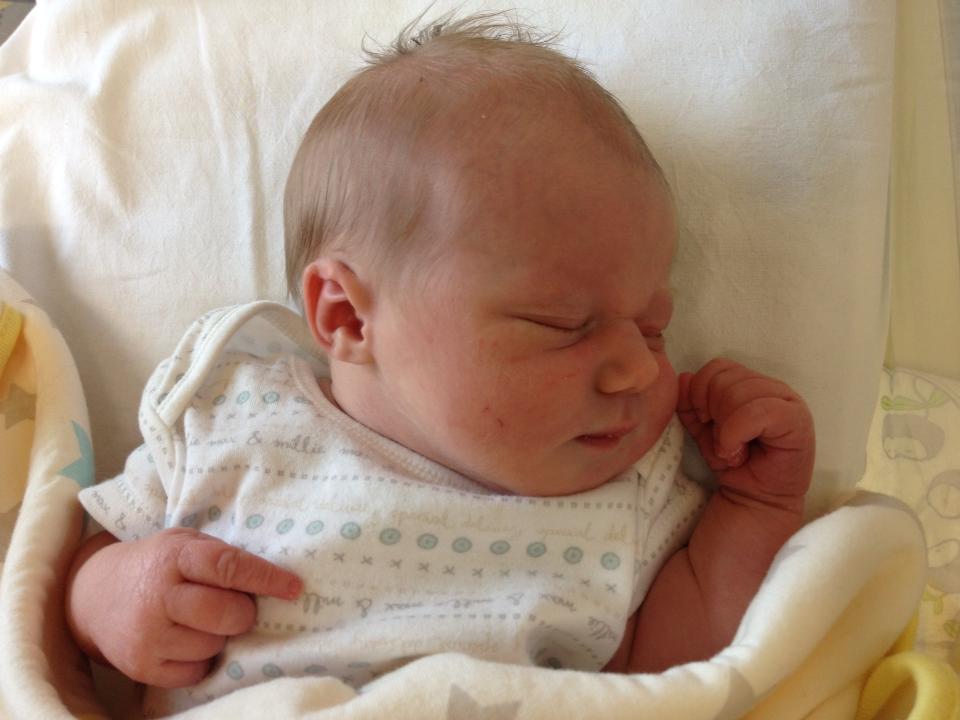 I’ve wanted to write about the little lady’s birth story for a while. I’d written down a little ‘diary’ soon after she was born, but I was never quite sure how to put everything together. So I figured I’d just start and see what poured out onto the page.

We had an allotment back in our pre-child days (you know, when we had a lot of time to allot). My husband and I were there a few days before D-day doing some strimming and digging up some potatoes and getting rid of some weeds and marvelling at the size of our marrows. Those marrows were fantastically huge. I probably shouldn’t have been carrying them around though. This is what I blame for starting my contractions.

I remember being told that technically labour starts when you are 4cm dilated. I say that’s a crock of shit. Labour starts when you, the person who’s in labour, say it starts: whether that’s with your water breaking hours before contractions begin, contractions starting a week before you deliver, or when a midwife shoves a damn pessary up in there. It’s all labour.

Anyway, that night around 11pm, the contractions started. They weren’t full blown contractions; I could talk through them and I think before I called maternity assessment I already knew that. I was told to take some paracetamol (like that’s going to hit the spot) and try to go to sleep. I didn’t take any paracetamol, and having contractions is way too exciting to make any attempt at sleep, but we got the TENS machine out and stuck it to my back. I had tested it out once already so I kinda knew what it felt like: fuzzy tingling is the best way I can describe it. I liked it. I’m not sure if it actually provided any pain relief, but it gave me something else to think about when I had a contraction other than pain.

I took over my husbands side of the bed (the side nearest the bathroom) and watched TV for the next few hours. Gradually the contractions got weaker and shorter. By about 5am they had faded away to nothing. And I slept. For a little while. Because let’s face it, in an un-air-conditioned tenement during a mid-August heatwave, an uber-pregnant Scottish girl isn’t going to get that much sleep…

That was Tuesday. Wednesday night was much the same, with slightly stronger contractions and slightly less sleep.

Thursday was D-day, and my final community midwife appointment at the local hospital. I walked in to the reception desk to let them know I was there to be told that my appointment hasn’t been properly booked and I might have to wait a while. I immediately exploded into a pool of tears and snot and blotchy face. One of the midwives I’d gotten to know a bit throughout my pregnancy (a really lovely lady) was getting a file from behind the desk. She looked at me, told me to go wash my face and took me right in.

I attempted to explain between sobs and sniffs that I’d been contracting for the past few nights, but I couldn’t. I’ve never been so glad to have my husband beside me to translate. She did all the regular checks: iron level, blood pressure, a feel at the bump – you know the ones. She also had a swatch at my cervix and informed me that I was 2cm dilated. I had a little hip hip hooray to myself at that point: my body wasn’t just pointlessly torturing me. She asked if I wanted her to do a ‘sweep’ (you know, where they very uncomfortably sweep their fingers around the cervix to attempt to stimulate it to get on with stuff) to which I hastily agreed, and I left with my fingers crossed that soon, this would be it.

Sunday night at 11pm, regular as clockwork the contractions started again. This time they were different though. I couldn’t move when I contracted. I couldn’t speak either. The TENS wasn’t helping as much as it had for the past 6 nights, even just to distract me. All I could do was focus on breathing. Just like I learned in my prenatal yoga class. I breathed the hell out of those contractions. I bounced on an exercise ball, took a shower (with my husband sitting patiently next to the bath to make sure I was ok through the contractions), bounced again, attempted a tiny bit of yoga, bounced some more…

Around 2am it was time. My husband helped me down the 2 flights of tenement stairs (stairs that never felt so long) and across the road to the car. It took me so long that I had to stop twice on the way to the car to have contractions. I couldn’t focus on anything else. Breathing was all I could manage. And pressing the button on my TENS.

We got to maternity assessment at the hospital and I was checked out. I was 5cm now. Yussss! Yep, it had taken me almost 4 whole days to progress 3 cms. But at least I was far enough on that I didn’t get sent home. Instead I was wheeled down to the labour ward. Room 4. My midwife was lovely, if a little too cheery for 4am. She kept trying to give me diamorphine (the one thing that was on my “absolutely not having that” list) but I was fine with my TENS machine and my breathing for the moment.

We got to 5am and just like the past 6 nights had gone, everything started to slow down. I had several options: I could see what happened and have another however many nights of this, or they could break my waters and if that didn’t get things going, put me on a hormone drip to get the contractions on the go again. I really can’t even describe how utterly exhausted I was by this point. I wanted that baby out. And so I went for the breaking waters and moving around option. It didn’t work. So we started the hormone drip. I knew that this would ramp up the contractions (and thereby the pain) and I was so unbelievably tired. I had no energy after a week of very little sleep; I wasn’t allowed to eat or drink anything. I opted for an epidural.

To get the epidural I had to be completely still for a good few minutes. Probably for a bit longer than usual because it was a student who was doing his first ever epidural on me, under supervision. Yay. The midwife showed me how to use the gas and air to get through the contractions without moving.

It turned out that the little lady was back to back – the wrong position for labour, and things were probably not progressing because she was turning incredibly slowly. The next 12 hours were quiet and dull. Things did start to progress, but at some point the drip “tissued”; my vein collapsed and the fluid started going into my tissue instead of the blood, so they had to redo it in another vein. The doctor came in a few times and said things like “let’s check again in 2 hours” and “we’re getting there, slowly” and “give it another hour” and finally, “just half an hour more”. After that half hour I was at around 9 cms dilated but with all the turning the little lady’s head was a tiny bit swollen, as was my cervix, and there probably wasn’t going to be a vaginal birth. I was fine with that. The midwife told me a little about what would happen if I needed a ceasarian section. Her heart rate started to drop and I was taken into theatre.

I have never had any surgery before so for me, this was the most surreal experience of my life. My husband was sitting next to me, holding my hand. There was a curtain up between my head and my belly so I couldn’t see what was happening. I could feel stuff though, like the theatre staff putting what I assume was cleaning stuff on my skin. I started to freak out. I asked the anaesthetist to explain to me how I wasn’t going to be able feel being cut if I could feel what was going on down there. He very patiently explained to me the difference between different types of nerves and assured me that the ones that make you feel pain are completely numbed. He then started talking about dogs. At one point he told me “you’ll probably feel a strange and strong sensation, like an elephant walking on your chest” which I guess I kinda did. It was maybe more like my labrador having a bounce on my chest than an elephant walking there.

And then, suddenly, at 7.02 pm there was a baby. It was a girl. She was a weird colour. She was taken over to the scales and wrapped up warm before she was handed to my husband. I didn’t get to hold her then, but he held her right next to me. I can’t even remember if she cried. I remember I did though. 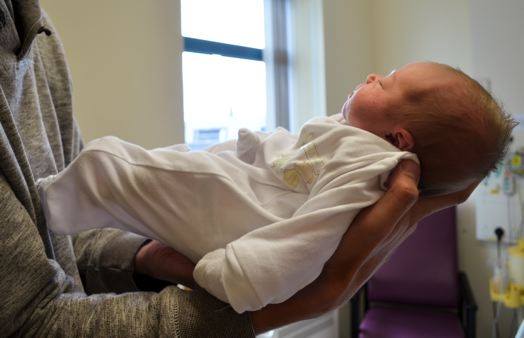 I was never unconscious throughout the entire process, but I cant remember anything that happened and I have no idea how much time passed before I was in the recovery ward with my husband and brand new squishy baby. We held her. We skin-to-skinned her. We messaged our family with the news. We named her.

We had a baby!

I was wheeled to the ward upstairs a few hours later and my husband asked if I could get something to eat because I hadn’t had anything yet. I got a miserable sandwich. That’s the only thing I resent the staff for that night – I never got that famed post-birth tea and toast – the tea and toast that everyone talks about. He was kicked out soon after that, and I fell asleep. 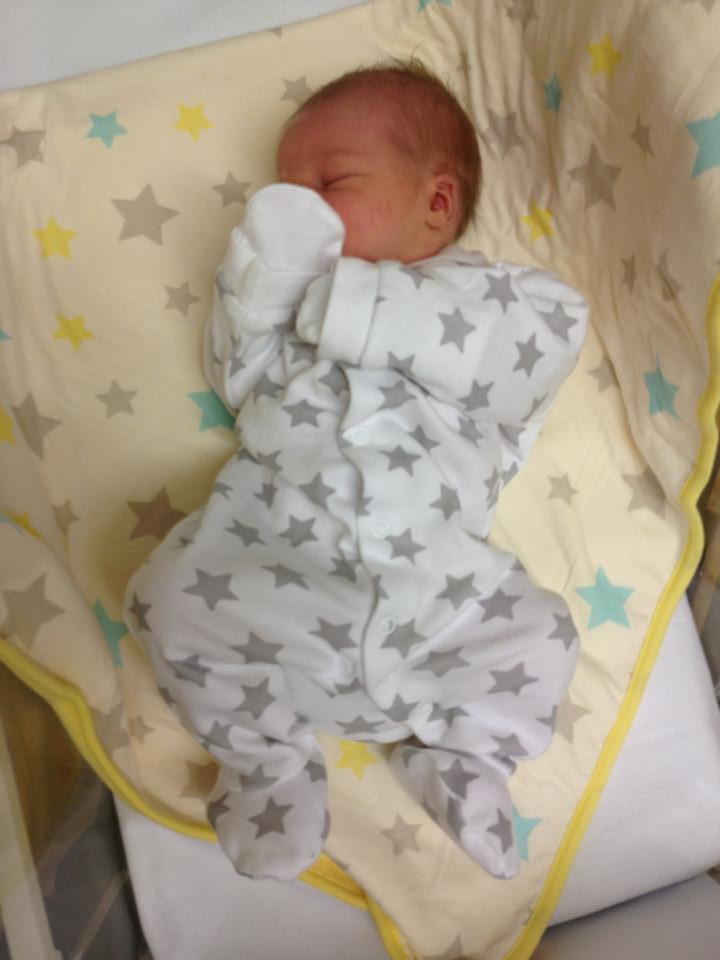 There are so many decisions to be made during labour. Decisions that in a non-exhausted state I may have made differently. Looking back, I may have opted for the epidural because I was a little scared of what was coming next. Scared that I wouldn’t be able to do it at all, never mind without good pain relief. I have no real idea whether things would’ve gone differently had I made different decisions, but I don’t think they would have. My labour was progressing incredibly slowly, my cervix wasn’t quite dilated enough and she wasn’t down far enough for me to do any pushing, probably because of her position. In the end her heart rate was decreasing as I contracted, and that was that. Would I make the same decisions again? An impossible question. I’ll never been in exactly that position again. We’ll just have to wait and see what happens this time round.