I have an admission: I have never before been through to the Edinburgh festival. I always meant to go, but just never got round to it. So even though we went to Edinburgh last weekend purely to see some kids shows it was still slightly exciting for me!

Edinburgh was pretty busy (Edinburgh always feels like that when I’m there though). There were street performers and buskers and balloon men absolutely everywhere. Such a great vibe on every street we walked down. We met a pirate, a monkey typewriting, lots of bands and the little lady had a wee dance on the Royal Mile to some ceilidh music. Great fun in itself! 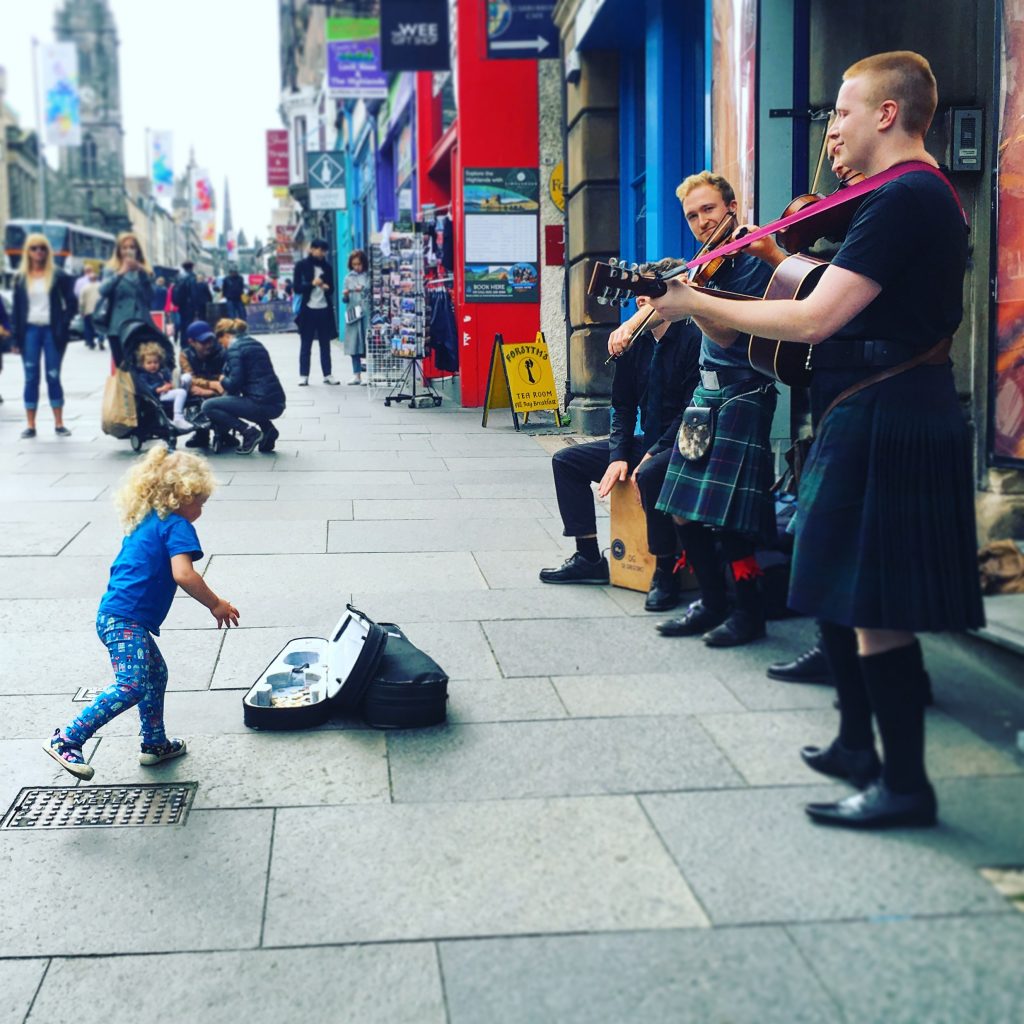 We went to see a few kids shows. We only had one day so I crammed as much as I could in! They were Children Are Stinky, Celeste’s Circus and Seussical.

Piccolo Tent in George Square Gardens; On until 29th August.

Children Are Stinky is a show incorporating acrobatics, stunts, banter, dancing, music that you can’t help clapping along to, audience participation and a whole lot of hula hoops. Lots of jokes too. Particularly fart jokes which the kids found hilarious, but lots of other jokes that the adults found really funny too.

Kylie and Jason begin the show by telling the audience that children are unimaginative, lazy (plus a few other things I’ve now forgotten – baby brain) and stinky. Throughout the show various children are brought onto the stage to participate in the show, and eventually disprove all of their theories.

The mum in me came out at a few points, particularly during the section when there’s a tower of piled up chairs that Jason does a handstand on the top of. But he managed very successfully. Nail biting stuff!

The little lady really enjoyed it. She had so much fun dancing and clapping to the music. She was a tiny bit gutted that she didn’t get up on the stage though; I think she was waiting for her turn!

This show was great fun. It was lively, loud and full of laughs. My husband said he’d go see it even if he didn’t have a kid!

Celeste’s Circus is a one woman puppet show aimed at babies and toddlers. The whole background is black and everything that’s supposed to stand out is red or white.

The show has a really simple concept: there’s a round table in the centre of the stage with a cardboard circus tent on top of it. As the show goes on, the circus tent opens up and we see various puppet animals doing the things that animals might do in the circus.

We meet Ellie the elephant and the little lady’s favourite, Celia the fluffy white seal, plus quite a few more puppet animals along the way. There is lots to see and the finale with a gazillion bubbles falling from the ceiling was so exciting for the little lady. And she got to meet Celia the seal at the end which delighted her.

From the moment we sat down in our seats the little lady was utterly transfixed by this show. She sat the entire time in her seat and did not budge until the bubbles came falling down. That NEVER happens! She was the perfect age for it (at almost 3).

If you’ve ever seen the movie Amelie, it has that kind of happy and warm vibe about it. It’s beautiful and quirky and really well done.

This was an amateur production of Seussical at the American High School Theatre Festival: kind of a festival-within-the-festival. And it was a high school production. But the tickets were just a few quid so we thought we’d go along to see it anyway.

I love Dr Seuss so I expected to really enjoy it. The Seussical story is cheery, sweet and funny: Horton the elephant hears a tiny voice in a speck of dust, and nobody believes him. Horton tries to save the tiny colony despite lots of obstacles.

The little lady did enjoy Seussical. But as the final of our 3 shows of the day it was just too long for her. She wouldn’t sit at peace at all after the first 15 minutes. But with some snacks she at least wasn’t noisy. There was a beam of light just above our heads coming from a spotlight. Rather than watching what was going on in the show the little lady spent a good while trying to reach it and play with the tiny bits of dust floating around in it. Take from that what you will.

If you’re looking for a really fun and lively show that your kids will love, definitely go and see Children Are Stinky. If you’re looking for something a bit quieter and geared towards the younger toddler, Celeste’s Circus is the one I’d recommend. (There are also lots of other kids shows on at the Scottish Storytelling Centre.)

But we only saw 3 shows from the whole festival. There are TONS more for kids, and loads of them sound great. We could’ve spent a week seeing 3 shows per day rather than just one Sunday! If you happen to fancy a daytrip anytime in August, Edinburgh is the place to be!