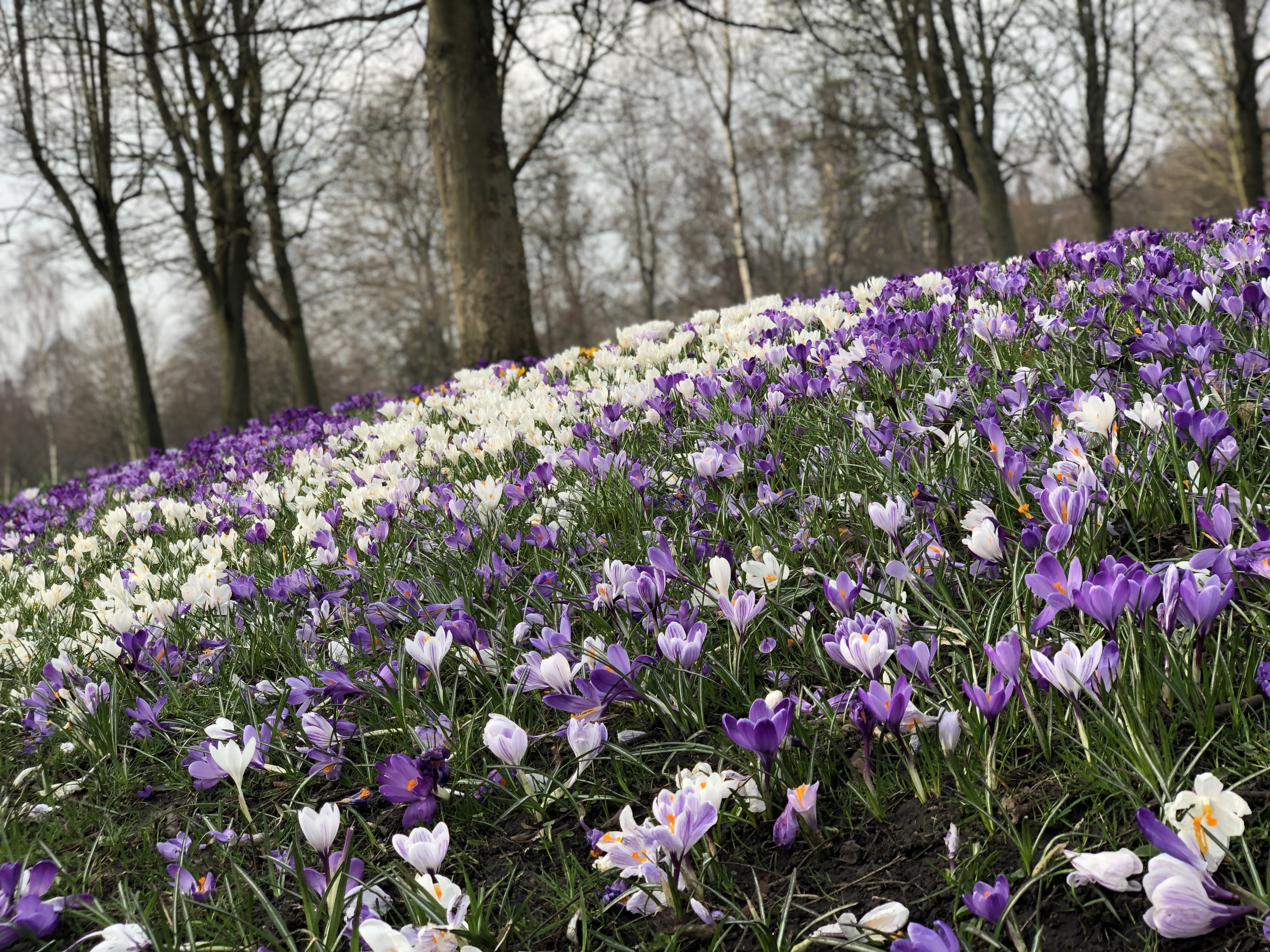 The flowers are popping up out of the ground, the cherry trees are starting to blossom and the birds are chirping in the trees. It’s definitely spring time now.

We’ve been enjoying lots of time outdoors lately which has inspired me to make a little list of things to do with kids this spring. There’s lots included here, and where I’ve been able to, I’ve made suggestions for places in or around Glasgow where you can do each activity.

I’m going to use it as a little bucket list for the next couple of months. I hope it’s useful for you too!

And baby chicks and calves and piglets and kids – the goat kind… So many baby animals; so little time. Our favourite places where you’ll be able to see some baby animals are Almond Valley Heritage Centre (out near Livingston) and the National Museum of Rural Life in East Kilbride. You might also get the chance to give some milk in a bottle to little baby lambs at Briarlands Farm in Stirling.

One of our favourite places was the hatching barn at Auchingarrich Farm Park where you can hold some baby chicks. There’s also Heads of Ayr Farm Park (great day out but absolutely a full day).

See All The Pretty Flowers

Glasgow’s parks look absolutely marvellous at this time of year. The colours are amazing! Recently we’ve been to Kelvingrove Park, Victoria Park and Pollok Park, and both have the most beautiful colourful flowers all popping up. Victoria Park also has a whole swathe of snowdrops over near the entrance to Fossil Grove. Another great place to see snowdrops is at Finlaystone Country Estate (entry fee applies).

Pretty soon the daffodils will be everywhere. And the cherry blossoms are all starting to come out too. Bellahouston Park has a few magnificent cherry blossom trees near the Palace of Art.

Go For a Spring Walk

This category could be an entire blog post all by itself, but I’ll do my best to summarise.

If I call anything ‘going for a walk’ the kids immediately go into their standard ‘that’s boring’ wail. But getting outside and enjoying the dry weather makes all of us a little bit happier, so I try to get us all out a few times during week at least, and at weekends too. I have a few tricks up my sleeve that I’ve started doing to make them forget that we’re going for a walk. The first is doing a scavenger hunt: making a list of things the kids have to find in a particular park, and they can tick them off as we go. The other is making a nature mask: cut out a face shape with some eyes, stick a bunch of double sided tape on it and let them go nuts decorating it with leaves and sticks and whatever they can find out in the park.

Our favourite places within Glasgow for a walk are Rouken Glen, Victoria Park, Pollok Park and the Botanic Gardens. All of them have at least a little playpark if the kids are being horrors and refusing to walk anywhere (which doesn’t happen often, but has definitely happened). If it’s not lovely weather but you still want to get outside, the glasshouses in the botanics are a great way to break up a drizzly walk.

If you’re heading farther afield, Chatelherault Country Park and Mugdock Country Park are both fantastic places. The loop walk at the David Marshall Lodge (at Aberfoyle) has loads of bits to play with. Finlaystone has a playwark spread through the woods that you do a loop walk to get around. These are just a few, but they’re the ones we’ve enjoyed the most recently and I have to stop somewhere!

The little lady and baby boy both absolutely love playing about in mud. We moved house last year and have a little garden now where we’ve started growing a few vegetables. The kids favourites were growing (and by growing I mean eating) the tomatoes and strawberries. They’re both pretty easy to grow. Tomatoes do really well being grown on a sunny window ledge indoors. (As long as you remember to water them.) If you don’t have much space you can even grow cress on a bit of wet kitchen roll. Or on a potato to make cress hair.

If you fancy doing the flower route, sunflowers are one of the best ones to grow with kids. They grow really quickly; great for impatient little humans who want everything to happen immediately!

A ladybug managed to get into our house the other day and the kids had an amazing time watching her and ‘taking care’ of her in a little tub. They were more than slightly upset when I told them it was time to let her go free. (Our cat was pretty intent on eating her and they’d have been way more upset had that happened.)

Anyway, all you need is a tub and some leaves to make it a bit more homely for your ladybug friends. Remember that ladybirds eat aphids though, so unless you have some of them lying around to feed them with, you can only keep your ladybird friends for a little while. Also, ladybirds can fly. A tub with a lid is a good idea.

Splash in Some Water

This one definitely requires wellies, and if it’s not beautifully sunny waterproofs are also a great idea.

It’s been a bit rainy here the past few days and jumping in puddles always gets a thumbs up from my kids. There are a few splash parks and little water play areas around if you fancy heading to one of those. They’re at Aberfoyle, the Falkirk Wheel, Dumfries House and The Kelpies. However a loch or a wee stream often has just as big an appeal for kids. Places we’ve had a bit of fun splashing in the water are in Loch Lomond at Luss (usually after doing the fairy trail there), down the bottom of Balloch Country Park, a few places down at the bottom of the glen in Chatelherault Country Park, and in the river at Rouken Glen.

[NOTE: Obviously I’m not telling you to send your toddler into a river or a stream or any other water body. I’m talking about a little splash at the edge and maybe throwing some sticks or rocks in. Rocks etc can be very slippy to stand on and very dangerous so always be safe around water and take the appropriate precautions to ensure that your kids are safe too.]

The little lady has been asking to fly a kite for weeks now. I don’t know where the inclination came from, but it seems like a nice springtime activity to add to our list! Beaches, or anywhere along the coast is probably going to be the best place to head for this. That’s where the wind always is!

Go To The Beach

And get fish & chips. In any weather. I prefer it at the beach when you need to have your jumpers and wellies on. (Mainly because it’s waaay quieter!) Take a watering can (the little mans favourite toy) and have a wee splash.

Our favourite beach to go to for a couple of hours is Troon. Mainly because it’s just less than 40 minutes along the motorway, but also because it’s quite a nice wee beach. We also quite like Lunderston Bay, Fairlie (near Kelburn Country Park) and Dunure (a bit farther than the others out past Heads of Ayr).

If it’s still a bit chilly you could warm yourselves with a mini colander fire and toast some marshmallows on it. It’s one of the most fun things we’ve started doing on days out and walks. Who doesn’t like a lovely gooey marshmallow?! (Even if it’s not chilly outside it’s still great fun toasting marshmallows!)

[NOTE: Fires can spread easily so ALWAYS make sure sure you build your fire safely. Some ground rules are as follows: Always choose a clear area, away from trees and bushes. Make sure there aren’t any dry leaves lying around that could catch fire, and try and choose somewhere with a natural windbreak. The colander we use holds all the ash and sticks inside it, and we just take it home in a bag when we’re done so we don’t leave any horrible charred bits in pretty places. It really is a tiny fire but it’s enough to toast your marshmallows! If you want some more information re fire safety this is a pretty good starting place.]

We found tadpoles a few times last year when we were adventuring farther afield. In Glasgow though, I have it on good authority that there are tadpoles in lots of the ponds in parks around the city. A few of my friends made some suggestions of places to have a look for tadpoles. They suggested Queens Park, Maxwell Park, Victoria Park (in Fossil Grove), Hogganfield (not in the main loch, but in the waterways just off to the side), and in the pond in Mugdock near the visitor centre. (Thanks Carrie, Ashleigh & Danar!)

We haven’t ever brought tadpoles home or taken them away from their little homes and their brothers and sisters. All we’ve done is catch them, look at them for a bit and pop them back. If we brought them home they’d just die, and I don’t want to kill anything!

We’re totally spoilt for choice for family friendly daytrips. I’m working through writing about all those we did in the never-ending summer last year. There were castles and country parks and beaches and farms and zoo’s and all sorts. Have a look through the day trips category on the blog and see if anything I’ve written about so far takes your fancy. Or you can have a scroll through the Glasgow With Kids facebook page as there are lots of posts there too.

We bought a set of bubble blowers and a massive bottle of bubble liquid from Tesco for £3 and it’s been one of their favourite things to do when we’re in the garden. It’ll also be great for taking to the park as well.

Dippy is in Glasgow until May, at Kelvingrove Art Galleries so there’s still plenty of time to see her. It’s free to see Dippy and you can have a wander around the museum while you’re there.

This is one of our favourite things to do if we have an hour to spare. We usually take some monkey nuts along with us and, particularly in Kelvingrove Park & the Botanic Gardens, the squirrels will take them right out of your hand!

You can do this anywhere, but our favourite places to get out and scoot or have a cycle are Cuningar Loop, Strathclyde Park, Kelvingrove, Victoria Park and Bellahouston. They’re all paved and have flat bits and hills. Kelvingrove has a skate park and Cuningar Loop has a great little pump track.

I hope this list comes in handy for you and gives you some ideas for things to do in the next few months, or beyond! If there’s anything you think should be added, leave a wee comment below and I’ll check it out.